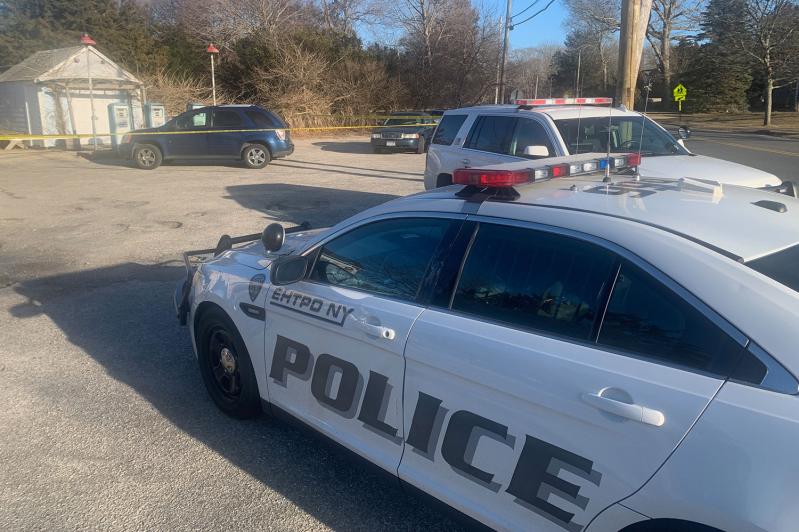 A section of the Springs General Store's parking lot was blocked off with yellow caution tape on March 8 as police searched the area for a man who fled on foot after robbing a woman in her car.
Hampton Pix
By Bella Lewis

East Hampton Town police have arrested a 47-year-old Springs man in the armed kidnapping and robbery of a woman in that hamlet in early March.

Jay Rowe was charged on Monday with robbery in the first degree, kidnapping in the second degree, and grand larceny in the fourth degree, all felonies, after allegedly entering the woman's car, parked in the rear lot of the Springs School, on March 8, around school pickup time.

Police say he showed her a handgun and demanded she drive to nearby Shipyard Lane, a dead-end road. The woman, a 38-year-old also from Springs, has not been identified.

"Once at that location, Rowe demanded money from the victim and removed approximately $8,000 U.S. currency and her cellphone from her before fleeing on foot," police said in a release.

Springs School was put on lockdown at the time, just to be safe, said police. A K-9 unit and a Suffolk County helicopter assisted in the search for the man, who was not found.

The victim described him as a 5-foot-5 white male weighing about 150 pounds and wearing a "camouflage sweatshirt." Colin Astarita, Mr. Rowe's attorney, noted that his client is closer to 6 feet and weighs about 200 pounds. Police have the wrong man, he said Tuesday.

During an investigation of security camera footage from earlier that day at a bank in town that police did not name, detectives were allegedly able to identify Mr. Rowe, wearing a camouflage hoodie, at the bank at the same time as the woman. He surrendered to town police on Monday morning and was booked on an arrest warrant.

Mr. Astarita said police had spoken with Mr. Rowe right after the incident and that he had protested his innocence. He had been a person of interest for two weeks before police secured an indictment.

Mr. Rowe turned himself in at police headquarters at an arranged time on Monday. He was to have been arraigned later that day at Suffolk County Supreme Court in Riverhead, but a computer problem at court delayed the arraignment to a virtual one on Tuesday.

Formerly a driver for a waste management company, Mr. Rowe is currently a self-employed mechanic. He is married with four children, the youngest a 9-month-old infant.

Police have urged any with information regarding the crime to contact them at 631-537-7575.

Note: This article has been updated since it originally appeared in print and online.

A Reminder From PSEG About Digging
Petition to Speed Up Sand Replenishment in Montauk
Artistic Portraits of M.L.K. Up for Auction on Saturday
END_OF_DOCUMENT_TOKEN_TO_BE_REPLACED