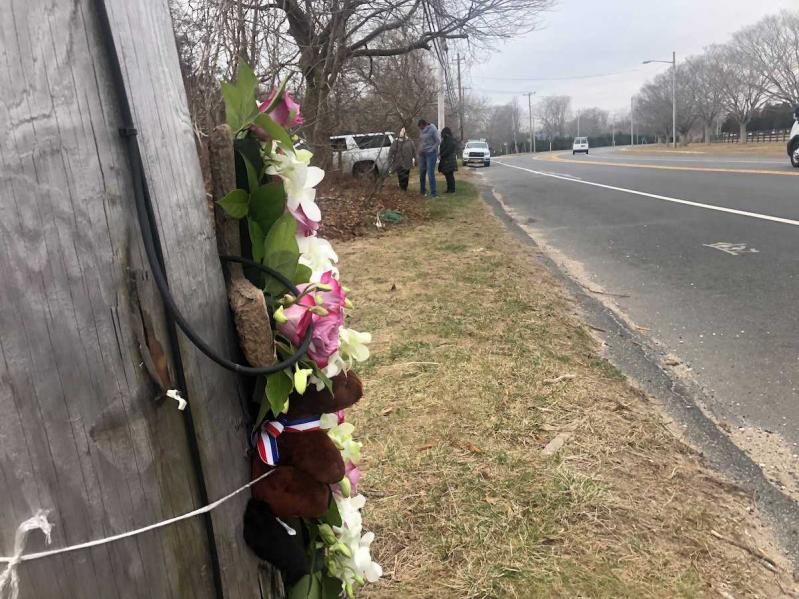 A roadside memorial of flowers and toys has taken shape on Route 27 where Yuris Murillo Cruz was struck by a hit-and-run driver on Wednesday.
Christine Sampson
By Christine Sampson

A roadside memorial of flowers and toys now marks the place on Route 27 where Yuris Murillo Cruz was walking with her two young children on Wednesday when they were struck by a red pickup truck that fled the scene.

Ms. Murillo Cruz died from her injuries on Wednesday. The children — Gael, 1, and Michelle, 4 — remain hospitalized with injuries in the pediatric intensive care unit at Stony Brook University Hospital with their father, Wilson Murillo, at their side, according to Nicolasa Arevalo, a cousin.

“They seem to be in shock,” Ms. Arevalo said as another friend and another relative fastened a cross of flowers to a nearby utility pole, tears in their eyes.

On Thursday afternoon, as Ms. Arevalo was looking for a set of the family’s keys in the brush off the eastbound shoulder of the road, she pointed out a place where the children’s toys had been scattered on the ground after the impact of the accident.

The PTA of the Amagansett School, where Michelle attends school, has established a GoFundMe campaign to raise money to help the family. By Thursday afternoon more than $22,000 had been raised toward a goal of $150,000. The PTA is also encouraging school families to prepare or contribute meals for the Murillo family as they cope with their loss, hoping to provide meals for them for several months. Those wishing to contribute can do so by clicking here.

“A situation such as this affects all members of the school community, yet it is a time in which we can also band together to help those most impacted by this incident,” Seth Turner, the Amagansett School District superintendent, said in a letter to families on Thursday.

This article has been updated since it was first published to correct Ms. Arevalo's name, Mr. Murillo's name, and the ages of the children.