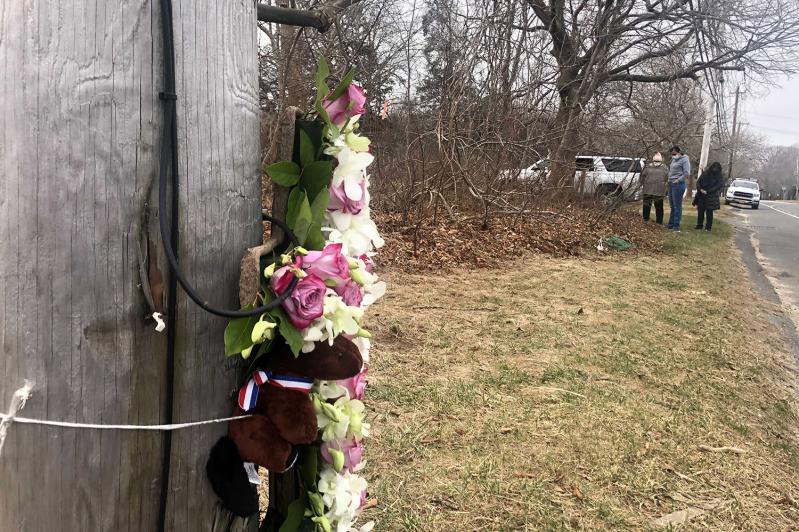 In January, flowers and children’s toys marked the place on Montauk Highway in Amagansett where Mark Corrado struck Yuris Murillo Cruz and her two children and then fled the scene.
Christine Sampson
By Christine Sampson

The driver in a fatal crash in Amagansett in January took a plea deal last week, accepting a felony charge of leaving the scene of an accident resulting in death.

Mark A. Corrado Jr., who struck Yuris Murillo Cruz and her two children, fled the scene, abandoned the borrowed truck he was driving, and took an Uber home to West Babylon on Jan. 13, will be sentenced on Nov. 29 in Suffolk County Supreme Court.

A spokeswoman for the Suffolk County district attorney’s office said this week that on Nov. 10, Justice John Collins promised Mr. Corrado a sentence of one and one-third to four years in prison. The charge, a class D felony, carries a maximum sentence of up to seven years in prison.

As part of Mr. Corrado’s plea deal, one of his original two charges, tampering with physical evidence, has been dismissed “in satisfaction of the plea,” despite his admission to police that he removed the license plates and other identifying information from the 2017 Dodge pickup truck he was driving. Mr. Corrado, now 29 years old, is represented by Legal Aid, which does not typically comment to the press.

On the afternoon of Wednesday, Jan. 13, Mr. Corrado was driving east on Montauk Highway near the T&B Auto Service shop at about 45 miles per hour, listening to rock music, when the vehicle ahead of him slowed to make a turn. Mr. Corrado told police he hit the brakes hard, causing a plastic water bottle to fall onto the floor near his feet. In his 10-page written statement, he said he reached down to retrieve the bottle so it wouldn’t roll beneath the pedals, but when he did so, he felt the truck “hitting something.”

“Something” turned out to be “people” — Ms. Murillo Cruz, 36, and her children, Michelle and Josue Gael, who were sitting in a side-by-side stroller. Ms. Murillo died of her injuries at Stony Brook Southampton Hospital, where she had been flown by helicopter. Her children were treated in the pediatric intensive care units at Southampton and the main Stony Brook University Hospital campus.

Mr. Corrado kept driving, ultimately abandoning the car about a mile away in the dunes at the end of Gilbert’s Path. He hid in a wooded area while local, county, and state police searched the area, even employing a K-9 unit and the helicopter that flew back after its trip to the hospital. Mr. Corrado used his cellphone to get an Uber to take him home, and about two and a half hours later, he contacted the East Hampton Town Police Department to make arrangements to turn himself in. A roommate drove him to first precinct county police headquarters in West Babylon, where an East Hampton detective came to take him into custody.

Neither drugs nor alcohol were a factor in the accident. “I left the scene and didn’t go back because, to be honest, there is no other explanation than I panicked,” Mr. Corrado said in his statement.

Ms. Murillo Cruz and her husband, Wilson Murillo, had lived in the East Hampton area for about 20 years. Mr. Murillo works in landscaping, but a relative said after the accident that he had not been able to work much because he needed to devote most of his time to his children. Mr. Murillo, who speaks limited English, could not be reached for comment this week.

Community efforts to help the Murillo family culminated in many donated meals and more than $220,000 raised on the website GoFundMe. In addition to her husband and children, Ms. Murillo Cruz is survived by her parents, six siblings, and two stepchildren. In a Jan. 28 obituary, she was remembered by family and friends as a kind, gentle person who “liked to brighten people’s days with daily affirmations or prayers.”