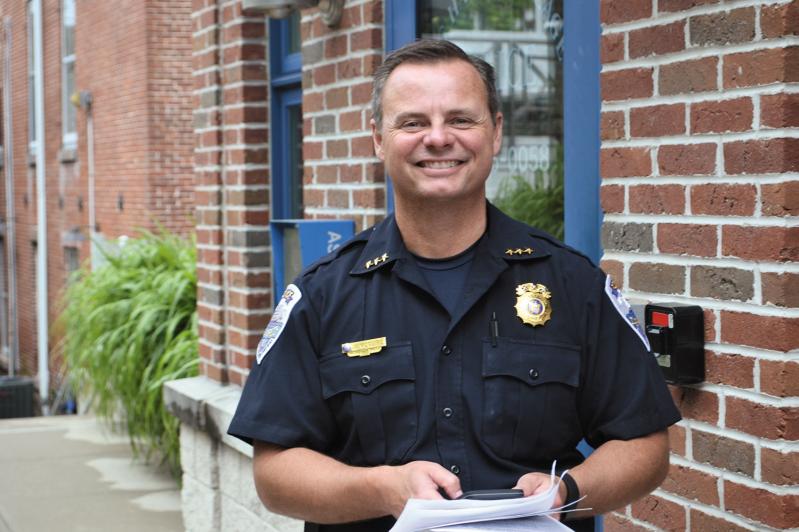 "In every industry and every profession, there are people who are not the best choice for that position; it has huge ramifications in my profession when the wrong person is in the job and is not suitable," Sag Harbor Village Police Chief Austin J. McGuire said earlier this month.
T.E. McMorrow
By Bella Lewis

Law enforcement officials in Sag Harbor, East Hampton, and Suffolk County are preparing to seek public participation on committees that will discuss police reform, mutual trust between police and the public, and racial equity, following an executive order by Gov. Andrew M. Cuomo in June. A recently released state manual, intended for both public officials and citizens, lays out the questions the committees will consider and the guidelines they will follow.

In a letter this month to chief executives, police chiefs, and sheriffs, the governor emphasized collaboration with the community, again stressing public participation in the process of police reform and asking the officials to "evaluate the [police] department's current policies and practices" as a whole community, rather than in a top-down effort. If a department fails to produce reform plans by April 1, 2021, it will no longer receive state funding.

The first question in the new guidebook is, "What functions should the police perform?"

"It's kind of a broad question to throw at a committee," Chief Austin J. McGuire of the Sag Harbor Village Police Department said in an interview earlier this month, but, he said, it sets the tone of the manual, which doesn't have to be followed in any particular order. There are 500 police agencies altogether in New York State, each with its own concerns, and different committees will surely focus on different topics. Other sections of the guidebook cover staffing, budgeting, "equipping your police department," "police strategies to reduce racial disparities and build trust," citizen oversight and "other external accountability," "support[ing] officer wellness and well-being," among other topics.

The guidebooks offer the various agencies a form of "checks and balances‚" Chief McGuire explained, preventing them from being run in 500 different ways. "One-stop shopping," he called it.

The chief spoke to the particular need for reform at this moment in history, in the wake of the George Floyd killing in Minneapolis that spurred so many to call for greater police accountability and racial equity in policing. "You look at something that happens, and you say, how did that person get there? A lot of people scratch their heads, 'How the hell did that guy ever become a cop?' "

While "in every industry and every profession, there are people who are not the best choice for that position, it has huge ramifications in my profession when the wrong person is in the job and is not suitable," the chief said. "Huge, life-altering, and tragic."

People might be surprised, he said, to learn that "many police officers are just as mortified and disgusted by unnecessary violence" as the public. "It's very, very disturbing."

The question that should be asked in every such incident, he said, is, "How did this begin, and why are these people -- I mean the cops – here?" If every police response that did not meet the standard of public service was considered in context of that question, he said, it would help police home in on areas that need improvement.

Chief McGuire noted that are some calls that would best be answered by social workers, but stressed that in situations involving any risk to safety, police are necessary. Officers should, however, respond without "pouring gas on the fire‚" he said, or "hitting a fly with a thousand-pound hammer."

He also questioned the way in which television panels of "experts" discuss events among themselves without bringing in lawyers, who could speak more precisely to "what we're looking at and how we got to where we are." Citing the disappearance of Malaysia Airlines flight 370 in 2014, he said, "I watched CNN brief a financial consultant from London," he said, and was amazed that the network had brought on a British financial consultant rather than "an airline industry expert or a pilot or an airline mechanic." On Sag Harbor's police-reform committees, the chief aims to have a variety of people who have some expertise in, or connection to, law enforcement.

He has already begun asking people if they would like to participate, he said. "I'd like to get some young people involved" he said, as well members of the clergy and the business community, and the East Hampton Town Anti-Bias Task Force. Both Chief McGuire and East Hampton Village Police Chief Michael Tracey are task force members.

The East Hampton Town Police Department is also gearing up to form citizen panels. "I have had communications with the supervisor regarding preparing the process to select and invite panel members," said Chief Michael Sarlo, "and we have already formed some internal review of certain areas to focus on with our rules and procedures, training, and community engagement efforts."

Suffolk County, too, has begun a plan of action involving telephone surveys, County Executive Steve Bellone and County Police Commissioner Geraldine Hart announced recently. Over the next four months, county employees will be making 10-minute phone calls, some through random digit-dialing and others aimed at people who have had recent contact with police, both victims and persons charged with minor crimes.

"This survey is a valuable tool that will enable the county to gauge feedback from the public and their experiences with our police department," Mr. Bellone said. "This is part of our ongoing process to ensure an open dialogue with residents that will better inform the development of our comprehensive policing plan."

"We need the support of our communities to continue to be a successful department, said Ms. Hart. "I encourage people to respond to the surveys, because it will enable us to continue to move toward a more fair and equitable department."