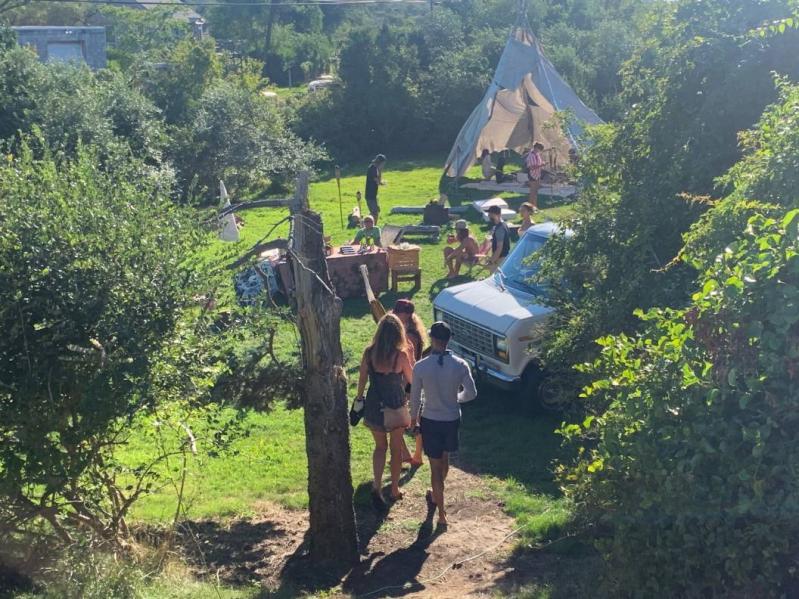 A party that allegedly exceeded Covid-19 limits resulted in the arrest of a Manhattan resident, who hosted the gathering.
Doug Kuntz
By Bella Lewis

There were as many as 90 unrelated people, not wearing face masks or maintaining required social distance, partying at 16 Industrial Road in Montauk on the night of Aug. 30, according to an East Hampton Town code enforcement officer who charged the tenant of the house with "willful violation of health laws and criminal nuisance in the second degree, creating conditions that endanger others."

Albert C. Vigneau, 42, who gave his address as 535 Fifth Avenue, a Manhattan office building, was first reported by the officer, Russell Young, to be "holding an assembly on residential property for 50 persons or more" on the night of Aug. 1, without the required special event permit. Inspector Young called it a "private event with amplified music indoors," and also charged that a gate over six feet high, being used for driveway access, had been erected without benefit of a building permit. Mr. Vigneau, he said, told him that "we built the gate to control the flow of cars in and out."

Neighbors of the house had called police on several occasions this summer to complain of late-night noise. Mr. Vigneau, who was released on an appearance ticket, was ordered to be back in East Hampton Town Justice Court on Dec. 14, 2020.

In other recent arrests, David Guerra, 33, and Karla Tohon-Lopez, 36, of Cedar Ridge Drive, Springs, were charged Friday morning with unlawfully evicting a family of four. A redacted report indicates that on the evening of Sept. 1 they locked the family out and piled their possessions outside the house. The two were to have appeared in Justice Court this morning.

Rebecca Indiri, 56, of Old Barn Lane in Sagaponack was arrested in Wainscott Friday morning on a felony charge of criminal mischief. East Hampton Town police said she had intentionally kicked the rear driver's-side door of someone else's Ford Focus, causing over $250 damage. She is to appear in Justice Court on Sept. 24.

Michael Torres Ramos of Montauk, 36, was charged Sunday night at the Circle Bistro on the Plaza with selling a bottle of Corona Extra beer to a minor under the age of 21, a misdemeanor. He will appear in court next Thursday.

Jay Preston, 30, of Edmunds, Me., was questioned by police at around midnight on Aug. 30 on West Lake Drive in Montauk, leading to a search. Police did not say why they stopped him, but reported finding two and a half "plastic-wrapped blue pills," alleged to be oxycodone, in his pockets. Mr. Preston was charged with criminal possession of a controlled substance, and was to have been in court this morning.

Brian Garzon, a 19-year-old from Sag Harbor, was charged with aggravated unlicensed operation as well as "prohibited acts," not further explained, on Sept. 3. Sag Village police found his 2001 Nissan in the closed parking lot at Havens Beach, they said, and noted an open 25-ounce can of Corona in the cup holder. He will appear in Sag Harbor Court before Justice Lisa R. Rana on Friday, Sept. 18.

Jesiel De-Olveira was driving a 2005 Ford Econoline van on the morning of Sept. 1 when Sag Harbor police flagged a possible suspension of its commercial registration, which proved to be the case. The Seldon 28-year-old, who was arrested on Route 114 near Hampton Street, is scheduled to appear before Justice Rana on Friday, Sept. 18.

The same charge was leveled later that morning against Alexander Duulino, 31, of Sag Harbor, whose 2017 Jeep Compass was pulled over on Hampton Street by Hempstead Avenue. He too has a Sept. 18 date with Justice Rana.

Harbor police stopped Wilson Guazhambo-Zumba, 35, of East Hampton near Lincoln Street the next morning; he was similarly charged and will appear before Justice Rana on the same date as the others.

Maridona Jackson of Springs was arrested on the evening of Sept. 1 and charged with unlicensed operation during a traffic stop on Industrial Road in Wainscott. The 35-year-old will appear in East Hampton Town court next Thursday.

Dario Chicaiza-Barros of Springs was stopped Sunday night on Albert's Landing Road near Broadview Avenue in Amagansett and eventually charged with unlicensed operation. He will appear in court on Sept. 23.

On West Lake Drive in Montauk Saturday night, police stopped a 2011 Acura driven by Ryan Harkins, 28, of Rockville Centre. He too was charged with aggravated unlicensed operation, his registration having expired in July, according to the report. He has a court date of Sept. 23.