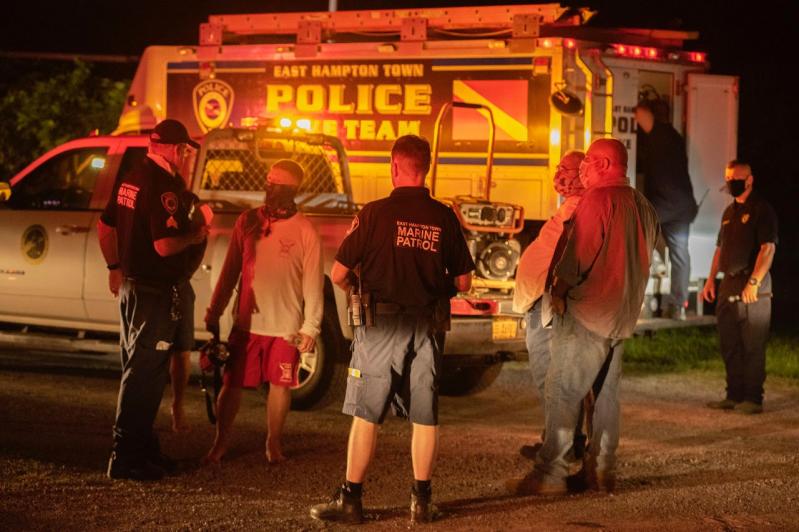 Members of the search teams that had been trying unsuccessfully to find a missing swimmer in Montauk on Sunday night.
Doug Kuntz

Polices and fire department divers were searching Fort Pond in Montauk on Sunday evening for a missing swimmer who had jumped into the water from a small boat, along with some companions, shortly before sunset.

According to several witnesses, four people had been aboard the boat. Three jumped in to swim, but only two made it back aboard. At least one person reported seeing the victim, a man about 40 years old wearing what was described as a yellow or white bathing suit, go down.

Divers responding from Sag Harbor and East Hampton concentrated their effort on the west side of the freshwater pond, with low visibility, until being ordered off the water at about 9:45 p.m. The depth of water was said to be about 20 feet.

The Montauk Fire Department brought in trucks with tower ladders to light the surface of the water from above. East Hampton Town Ocean Rescue and Marine Patrol aided in the effort as well.

Searchers aboard personal watercraft, fire department boats, and paddleboards with flashlights continued to crisscross the surface about 10 p.m., when they, too, were ordered off the water briefly to regroup. The search was suspended for the night at about 10:30.