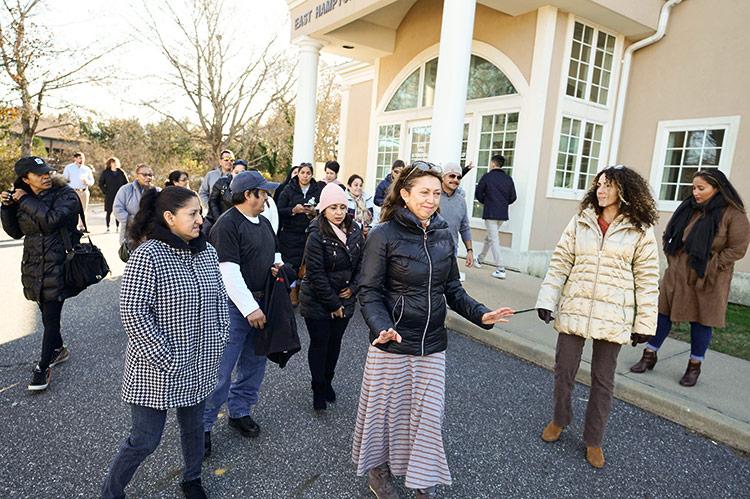 Community members who showed up for Lisa Rooney’s scheduled court appearance were disappointed the case was adjourned. Minerva Perez of OLA, at right, said it is important that lines of communication between the community and officials are opened further.
Doug Kuntz
By Taylor K. Vecsey

A woman charged with drunken driving in a fatal crash in Montauk on Halloween Eve was to have appeared in East Hampton Town Justice Court last Thursday, but the case has been adjourned — leaving the victim’s family and friends disheartened — because she is in an in-patient rehab program.

Lisa Rooney checked herself into a residential treatment program in Connecticut on Nov. 2, according to court officials, three days after the accident that killed James Usma-Quintero, a 28-year-old here on a working visa.

In a letter sent to the court from a senior clinician at the residential facility, Ms. Rooney’s preliminary plan calls for her to be in treatment through Dec. 1. The letter did not say just what treatment is involved, only that the recommendation was for her to complete 30 days of residential treatment, “and then go into an extended care program.”

Ms. Rooney, a 30-year-old Montauk resident and business owner, was driving a brand-new Chevrolet Silverado pickup truck when she struck Mr. Usma-Quintero, who was riding his bicycle home from work at the 7-Eleven in downtown Montauk. The accident occurred on the shoulder of Flamingo Avenue, near Falcon Place, just after 6 p.m. on Oct. 30. The victim, a father of two children who live in his native Colombia, died of his injuries at Stony Brook Southampton Hospital.

Ms. Rooney was charged with misdemeanor driving while intoxicated. She was released on $1,000 bail the following day, and her driver’s license was suspended. Last Thursday would have been her first court appearance since her arraignment.

The daughter of Bruna L. DiBiase, a New York City judge, Ms. Rooney now has a new lawyer, Marc C. Gann, who has handled many high-profile cases on Long Island. He is a founding partner of Collins Gann McCloskey & Barry, a Mineola firm.

Results from a blood test to determine the level of alcohol and/or drugs in Ms. Rooney’s system are still pending, but upgraded felony charges are said to be likely. Mr. Gann wrote to Justice Rana on Nov. 20 asking her to adjourn the case so that his client could remain in treatment. “It is also anticipated that this matter will be superseded by an indictment before that time,” he wrote. He requested adjournment until Jan. 13, but Justice Rana has scheduled it for Dec. 12.

Mr. Gann also wrote that the Suffolk County District Attorney’s office had consented to his request.

The adjournment left the victim’s family and supporters with mounting concerns about the case. They were already frustrated by the release of Ms. Rooney on $1,000 bail. About 40 people — some family, some friends, and some members of the public — attended court last Thursday in the hope the blood results had come back.

Justice Rana tried to address the bail concerns from the bench, but as she began to explain, the group got up and walked out.

Justice Rana explained that state bail laws are changing in January, when, based on the current charge, she would be prohibited from setting any bail at all. If the charges are upgraded, then the bail situation will change.

Ms. Perez said simply that the bail laws have not changed yet.

“The community feels shaken by what happened,” she said, adding that the Spanish-speaking community continues to feel “thrown off to the side . . . especially in moments of crisis.” OLA has reached out to the D.A.’s East End

Bureau chief and is hoping to set up a meeting in order to better understand the proceedings.

Over 100 people, Ms. Perez noted, had attended an impromptu meeting after Mr. Usma-Quintero’s death to talk about it. “The community is hurting,” she said.

The victim’s brother, John Fredy Usma, said by phone from Colombia, speaking Spanish, that he was worried about the postponement. “I am thinking that they are delaying the process to avoid justice,” he said.