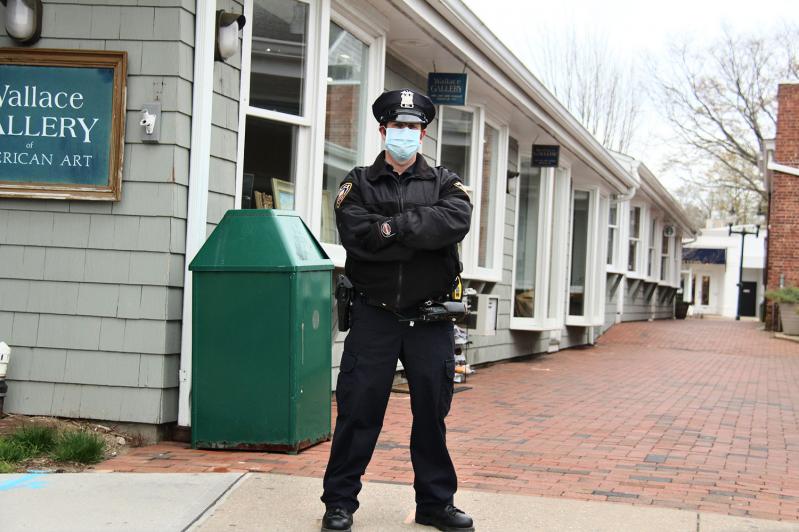 East Hampton Village Police Officer Sean Christian on patrol last spring. It has been an odd and challenging year for police officers, many of whom say they miss the community interaction of pre-pandemic times.
Durell Godfrey
By Bella Lewis

Asked if Covid is nerve-racking as they go about their jobs, enough police officers responded with some variation of "Scared wouldn't be the word" to point out that that might be a misguided question.

The riskiest move a person can make during Covid is something police do every day: head straight into close-contact situations. "Whether it's Covid or any other challenges, we're running toward those issues," said East Hampton Town Police Officer Luke McNamara.

Policing during Covid comes with a world of unprecedented stress. "I have to go in here and I might get Covid and I'll deal with the outcome later," Officer McNamara said, outlining the roll-with-the-punches mind-set he and his colleagues have toward the unknown.

"It's kind of one of those, 'You've got to do it, right?' " said Sag Harbor Village Police Officer Scott Frankenbach.

"Police families have a difficult challenge daily, but with this pandemic it has been exponential," East Hampton Town Chief Michael Sarlo wrote in an email. The possibility of taking Covid home to family members was the most daunting of concerns for most officers interviewed for this article.

Chief Sarlo said the difficulties of working through the pandemic are "immeasurable." His own job has been exhausting. "As part of the town's unified incident command structure during the first few months of Covid, it was 12-hour days, seven days a week."

With two teenagers at home trying to navigate distance learning plus the added stress on his spouse, "this has certainly been the most challenging and difficult phase of my career," Chief Sarlo said.

"Really any general interaction with the public is unrecognizable," observed East Hampton Town Police Sgt. Kenneth Alversa, who personally felt the change of times in the absence of community contact.

"Having the masks on all the time is definitely different," said East Hampton Village Police Officer Richard Sperber. "In the beginning, you realize how much you recognize people from the eyes down."

The only thing that seems more distant than life before Covid and masks? Life during Covid before masks.

Sag Harbor Village Police Chief Austin J. McGuire recalled when "four of my guys were exposed to Covid early on when we weren't even wearing masks." They did CPR on someone who then tested positive for Covid.

"If you saw it in a movie or book you wouldn't believe it," said East Hampton Village Police Chief Michael Tracey. He too looked back on early days and the "very strange situation for our people responding to emergencies," who would be told by their 911 center whether or not the location to which they were headed would involve potential Covid exposure.

Soon the pandemic became too rampant to even get the heads-up. "The county is at a level now where we don't get the locations of the cases," said Chief Tracey.

The three chiefs confirmed that even with precautions and decreasing contact, people in their departments still got sick. By now though, everyone on the force who wanted the vaccine has received it, and with great efficiency thanks to the Suffolk County Police Academy, which oversaw the vaccination effort, Chief McGuire said.

The overwhelming thing about Covid for the police force was the speed of it all. "When anything changes that frequently it makes it difficult to work with," said Sergent Alversa.

East Hampton Town Lt. John Claflin, as the Montauk precinct commander, pivoted from his usual work to do "everything Covid." He said he had experienced some of the busiest days of his 29-year career this past year, monitoring for mass gatherings and booming construction sites as per state orders to stay home and stop work.

Montauk's Friends of Erin St. Patrick's Day parade, for which he oversees policing, was canceled at the last minute as the extent of the risk for such gatherings came into focus last March in the early days of the pandemic.

In the office, "someone watching the news might see the governor putting out an order at 11 a.m. and not get the order until 5 p.m." In the fraught six hours in between, officers are left thinking, "Oh my God, how are we going to do that?" The confusion is not specific to the Police Department, Sergeant Alversa said. "It's hard for the public to keep track. Things were changing so rapidly, sometimes the public wasn't informed of the changes."

Chief Sarlo agreed that "staying up on county and state conference calls, interpreting the Health Department guidelines for businesses, and trying to find ways to communicate with the other town public safety departments and be proactive in communicating with the businesses has been quite an undertaking all around."

Lieutenant Claflin did not like the idea of having spent his entire career developing a rapport with Montauk business owners, "only to be hounding them just constantly like big brother, constantly looking at them, telling them what to do."

He worked to avoid this and make businesses feel comfortable, but after a while "we were dealing with a lot of people phoning in complaints and for some of the businesses, it looked like we were targeting them." Lieutenant Claflin sought to maintain balance and preserve the way that "cops are very in tune with everyone from the community. In a small community, we really value connection."

"We support and appreciate our local businesses, and are not in a position of trying to punish them while they are already suffering, but trying to help them figure out how to open and function safely and within the guidelines," Chief Sarlo said.

"As videos and photos made their way around the internet, state officials were sent out to inspect and enforce Covid restrictions within our jurisdiction." His department's goal was to have already been there and addressed the matter and seen that it was taken care of. "It didn't always happen, but for the most part it did."

Not always, but mostly: an apt way to describe even the best efforts to deal with Covid.