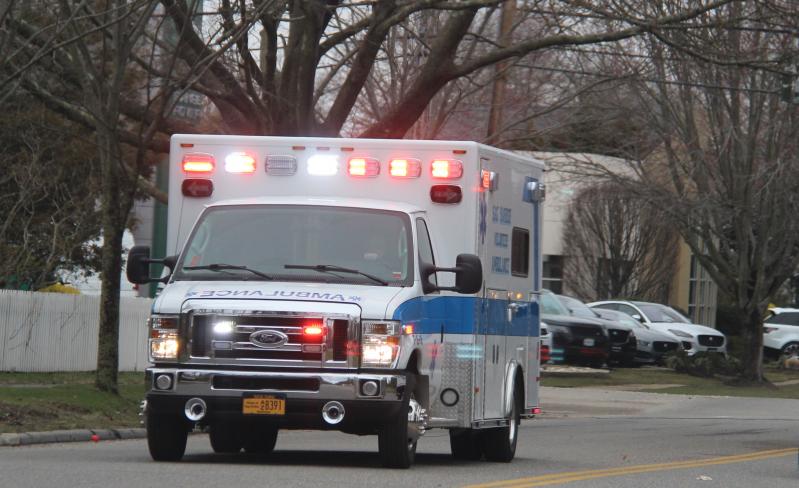 Emergency medical service personnel on the South Fork reported this week that 911 call volume was down in 2020 as a whole but up in the usually quiet months of November and December.

"People are, I think, afraid to go in the ambulance to the hospital, so things we normally see, we're not seeing people calling for," said Deborah O'Brien, president of the Sag Harbor Volunteer Ambulance Corps. That has translated into fewer calls for things like heart attacks and injuries. "Whether they're driving themselves, I don't know," Ms. O'Brien said.

"Over all for the year we were down probably about 200 calls," said Lisa Charde, chief of the East Hampton Village Ambulance Association. November and December, however, brought an increase of about 25 calls over the numbers seen in previous years.

"We went over our normal numbers the past two months and also now they're coming over as Covid-positive calls," said Ms. Charde. Earlier in the year, when dispatchers were relaying information about patients' complaints to E.M.S. personnel, they would use the term "F.C." for "fever and cough" symptoms.

Ms. O'Brien echoed Ms. Charde's assessment that it wasn't call volume in general that had increased so much as the number of Covid calls.

"It does put stress on volunteers," Ms. O'Brien said. And, "The calls take longer because of de-con when we get back and there's stress on volunteers getting it themselves and bringing it home to family members, which is all definitely an added thing for them time-wise."

Ambulances are cleaned after each trip by emergency medical technicians with special training who know how to use their personal protective equipment as well as a machine that fogs the whole ambulance to disinfect it.

While some issues with procuring personal protective equipment have been ironed out since the spring, some items are still on back order and Ms. O'Brien must still stay far ahead of schedule to keep critical items, especially gloves, in stock. "Gloves right now for us have been on back order. If you haven't ordered from the supplier in the past year, they're not letting you order at all. I can get 17 boxes of gloves -- not cases, boxes -- so I have to make sure that I order those 17 boxes."

E.M.S. personnel across the South Fork have begun to receive Covid-19 vaccinations over the past two weeks.

Ninety percent of the 27 members of the Sag Harbor Volunteer Ambulance Corps had gotten the vaccine as of earlier this week, Ms. O'Brien reported.

And Ms. Charde reported what she called a "fantastic" compliance rate for vaccinations among East Hampton E.M.S. personnel. Thirty-nine drivers, E.M.T.s, and attendants who are responding to calls have begun the inoculation process. "I think of all our membership we have two people who have declined the vaccine, just declined it outright, and I have two who are away who can't get it, but wanted it, and one person who can't get it because of an immune disorder."

Not so many were gung-ho at first, Ms. Charde said. "More people said no, and then their counterparts would get it, so they'd call me up and ask if they could change their mind. . . . I think people overthink stuff too much until they see people actually doing it."

For her, it was a no-brainer. "It was like my birthday."

"I feel like people just seem like a weight has been lifted. It's even hard to describe. Like a sense of levity. . . . I'm not going to go in a store without a mask or anything, just mentally it's such a relief." She still wears a mask and washes her hands as she should, but when she's at home thinking back on the calls she went on and whether she followed all the protocols, she doesn't worry quite as much. "A good E.M.T. questioned every call before Covid, and now that impulse is tripled."

Despite all the concerns about the novel coronavirus among E.M.T.s, Ms. Charde said seven of her 44 volunteers had joined the department just this year. "E.M.S. workers run towards Covid -- they're running toward the fire -- and everyone else is running away," she said. Marcia Dias, who joined the East Hampton Village Ambulance Association in 2017, hit 150 calls this year, was awarded member of the year, and was voted in as captain. "She's an up and coming person in this corps for sure, as are many Latinas and Latinos, three or four of whom are among the seven that just joined," Ms. Charde said.