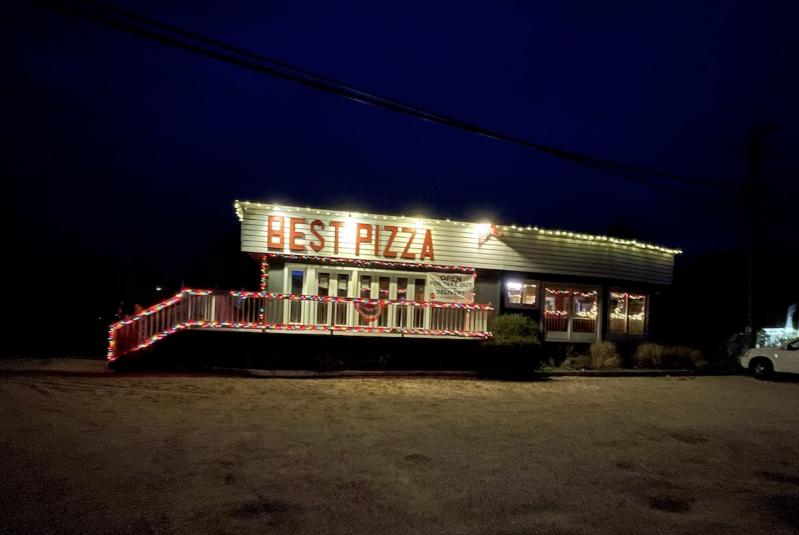 Best Pizza and Dive Bar is on the Napeague stretch.
Jane Bimson
By Christine Sampson

Best Pizza and Dive Bar on Napeague is among the latest round of 36 restaurants in New York State that have had their liquor licenses suspended for alleged violations of public health laws instituted under Covid-19.

According to a state press release issued Tuesday, plainclothes officers from the East Hampton Town Police Department visited Best Pizza on Nov. 15 and saw about 20 patrons "seated at and standing around the crowded bar, mingling, ignoring social distancing, and not wearing facial coverings." Officers said they were able to order and receive alcoholic drinks without having ordered food, and said they did not see anyone being served food with their alcoholic drinks during their stay, which is a violation of a July 17 executive order by Gov. Andrew M. Cuomo.

"Bartenders also continually removed their facial coverings to talk to patrons," state officials said in a press release. "This establishment is a repeat offender, with charges brought by the State Liquor Authority just days earlier for executive order violations based on a referral from the East Hampton Town Police Department."

Ben Selby, a co-owner of Best Pizza, said by phone yesterday that the restaurant was taking the suspension very seriously.

"We reached a settlement agreement with the S.L.A. to get the license back. We're facing a pretty stiff penalty," Mr. Selby said. "We completely changed the business structure. We'll have assigned seating and social distancing. We had a full staff meeting to make sure that everyone is in strict compliance. We want to apologize to anyone in the community who may have felt uncomfortable or unsafe."

All staff members have been tested numerous times for Covid-19 since the start of the pandemic, and have all been negative, he said.

"As we move into the colder weather and are forced indoors, it is imperative that businesses stay compliant across the state. New Yorkers must continue wearing masks, practicing social distancing, and following the life-saving protocols put into place to keep us all healthy," Vincent Bradley, chairman of the State Liquor Authority, said in a statement on Tuesday.

East Hampton Town Police Department records show there was also a visit to Best Pizza by the local fire department at 9:05 p.m. on Nov. 16 and a visit by police at 8:46 p.m. on Nov. 18 for a State Liquor Authority check.

According to its website, the Napeague restaurant is an outpost of the well-known Best Pizza eatery on Havemeyer Street in Brooklyn.

"Best Pizza and Dive Bar is a large format, casual bar and pizzeria with indoor and outdoor seating, as well as a heavy emphasis on summer nightlife," its website says. A GoFundMe campaign launched in March by its founder, Frank Pinello, raised $5,322 in donations for employees impacted by the pandemic.

"We have really tried our hardest since Covid started," Mr. Selby said. "It's been really tough for small businesses, and restaurants in particular, to enforce all these rules that are ever-changing."