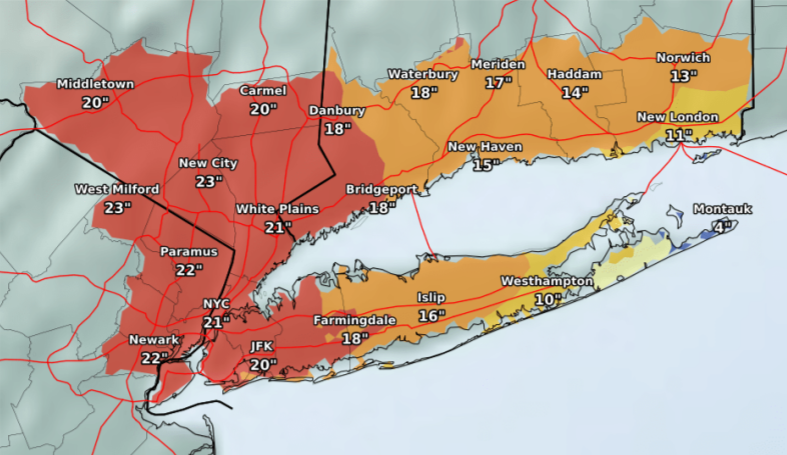 A wintry mix of snow and rain on Monday could total between three and five inches of accumulation on the South Fork, the National Weather Service said.

In its 6 a.m. report, the Weather Service said to expect snow on the East End of Long Island until about 1 p.m. before it changes to rain and snow in the afternoon, then all rain on Monday night. The wind will be from the northeast, 22 to 32 miles per hour with gusts to 47. At night, sustained winds could reach 34 with gusts to 50.

With the air temperature around 35 degrees through Tuesday, how much snow or rain will fall will vary by location. At Mattituck, on the North Fork, the Weather Service said snow amounts could be between five and nine inches. As much as 20 inches of snow was predicted in New York City. Islip could get 15 inches.

Flood warnings were posted for south-facing areas of Queens and eastern Long Island.

The National Weather Service office in Upton said that the major winter storm would affect the tristate region from a slow-moving low pressure system arriving from the west. It said that a more intense band of heavy snow would develop across New York City, northern New Jersey, and Long Island from the  mid morning into early afternoon and then gradually pivot north and northwest.

In coastal areas, winds 20-35 m.p.h. with gusts possible to 60 offshore could create near-blizzard to blizzard conditions from roughly mid-morning into the evening. Strongest winds were expected across eastern Long Island and southeastern Connecticut, where the snow will be heavy and wet.

The forecast for Tuesday is for rain turning to rain and snow, then all snow by nightfall. Little accumulation was expected. Dryer weather will return mid-week.

Town offices in East Hampton and Southampton were closed, as were Sag Harbor Village Hall, according to notices posted on the municipalities’ respective websites. Additionally, the Village of Southampton declared a state of emergency, which went into effect at 2 p.m. on Sunday and will remain until further notice.