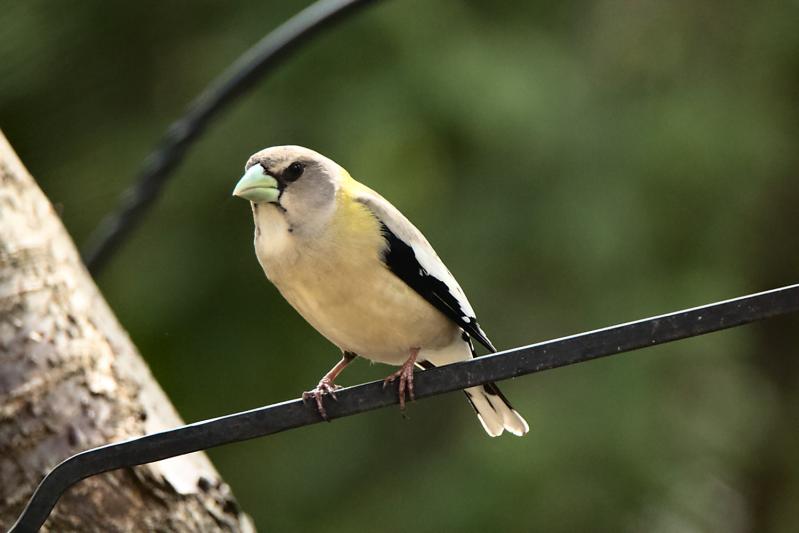 Terry Sullivan spotted an evening grosbeak, a bird usually seen here only in winter, and rarely at that, at his feeder in Sag Harbor last week and again on Monday.
By Larry Penny

This past week could have been called Grosbeak Week. I have never had so many reports of grosbeaks in town in the 37 years or so I have been writing my column for The Star. The first report was the most unusual. Terry Sullivan called about an evening grosbeak, a bird we usually see only in winter, but even then very rarely. A female evening grosbeak was at his feeder in Sag Harbor last week, and then again on Monday. By now, evening grosbeaks should be far to the north, where they breed, so why is this one still hanging around?Jean Held called on Sunday, she had a different grosbeak to report, a female rose-breasted grosbeak, at her feeder, but this one should be here at this time because it breeds locally. The day before I received a photo of a male red-breasted grosbeak at the feeder of Bradly Fenton, a retired doctor and lover of nature who has a place in Montauk. On Monday, David E. Rattray, the editor of The Star, forwarded me another picture of another male red-breasted grosbeak snapped by Gerald Pane at his feeder in Amagansett last Thursday.It’s obviously a banner year for grosbeaks locally. We are almost certain to have a red-breasted grosbeak nest or two, but wouldn’t it be even grander to have an evening grosbeak nest locally? Jean Held came up with another bird of the week, a male white-crowned sparrow. For those readers who live on the West Coast, this is a common sparrow, but one that only rarely ventures this far east. Our white-throated sparrow is a look-alike, and a few are still hanging around before heading north to breed. Jean says the white crown is bossing the white-throated male around. It could be one of those “My crown is bigger than yours” or “My crown is whiter than yours” situations, but I find it unusual that an out-of-towner would treat a local in such an imperious manner, but then again, I’m told that it is not unusual for some out-of-towner humans to act this way on the South Fork come summer.Goldfinches are also in abundance, as are the colorful New World warblers, several species of which breed here. Hummingbirds have also returned. Ellen Stahl, who lives next door, has ruby throats back at her hummingbird feeders, and three days ago, a male red-headed woodpecker (not to be confused with the now common red-bellied woodpecker), a rare breeder on Long Island, showed up at her feeder. Not more than 25 years ago a pair of red-headed woodpeckers bred each year in a wood at the edge of one of the horse farms in East Hampton’s Northwest. Every so often a pair breeds locally again.May is the month when Long Island and the rest of the temperate East Coast lights up. Shads and dogwoods are in bloom, mountain laurel will follow suit, particularly in parts of the terminal moraine like the hamlet of Noyac, where I reside. These three natives bloom white and can be confused with the sweet cherries, which also bloom white and are not native. Look for the purplish blooms of the bird’s-foot violets followed by those similarly colored ones of the taller lupines. These two wildflowers used to be quite common on the shoulders of roads in the Northwest of East Hampton but are now rare. When I think of them I also think of Bob Meinke, who was the town’s highway superintendent through much of the 1980s and who cared for shoulder wildflowers as much as he cared for the roads they grew at the edge of.How is it that the white pines in Northwest survived the southern pine borer beetle blight that has killed so many of our pitch pines? For now the former have survived. I have several white pines in my yard and a few of those tiny borer beetles, generally less than 2.5 millimeters in length, buzzing around them. The white pines secrete so much white sap when attacked, that they overwhelm the beetles. It makes sense. Pitch pines are more southern in origin, white pines more northern. East Hampton’s Northwest is one of the few places on Long Island where white pines thrive.As reported elsewhere, almost all of the ospreys that nested here last year are back and nesting again in the same nests, which get a little bigger before each annual brood. The alewives, one of their prime food fishes — they also like koi — are back, as are menhaden and other members of the herring family. These birds have a remarkable recovery rate from one year to the next. How is it that so many survive the long trip south to overwinter in Central America and South America each fall and come back looking as healthy as when they left? Could it be that they are designed by a higher entity than man and not by Boeing engineers?Almost all of last year’s osprey nests are filled with ospreys. One that isn’t is occupied by birds of a different feather, bald eagles. I stay away but I have a spy, Karen Rubinstein, who keeps track of them. She reports that there are two chicks in the Accabonac Harbor nest and that they are doing well. Bald eagles returned as breeders to East Hampton’s Gardiner’s Island circa 2006, after an absence of 70 years or so.I’ve been in a funk all winter and thus far this spring. However, I think I’m beginning to emerge from this annual torture. What was the name of the group that so joyfully sang, “Let the sun shine in!” 20 or 30 years ago? That tune is beginning to stir in my head yet once more.Larry Penny can be reached via email at [email protected].

The sightings come flooding in