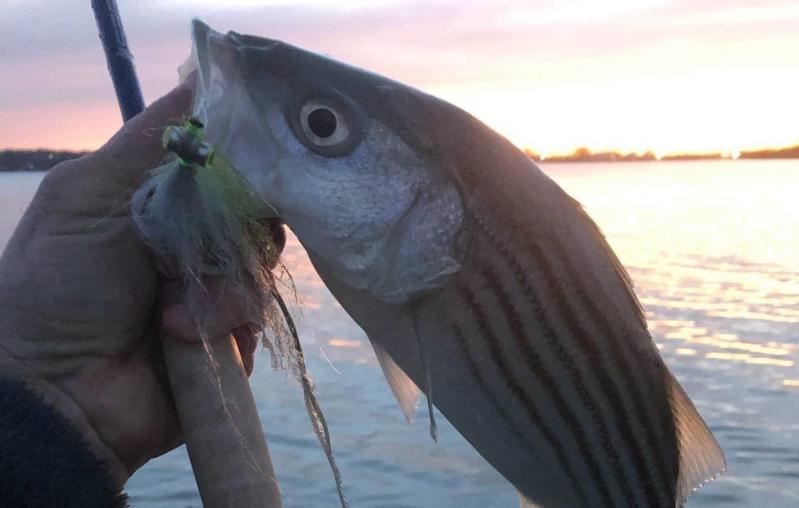 Small striped bass are on the prowl in local coves and estuaries.
Capt. Tim O'Rourke
By Jon M. Diat

”Ticking away the moments that make up a dull day, you fritter and waste the hours in an offhand way.” Those rather dour opening lyrics come from the song “Time,” co-written by Roger Waters of Pink Floyd.

The part-time resident of Sagaponack, who also happens to be an avid light-tackle fisherman (who ironically got hooked on fishing by a fellow musician, Eric Clapton), helped pen the words of that now timeless song back in 1973. While almost 50 years have passed since its release, its words today also capture some of the feelings many of us have endured during the maelstrom of the global pandemic.

After a fatigue-laden winterlong game of avoiding Covid and basically just staying home (and perhaps listening to too much Pink Floyd), it felt much as if a heavy block of cement had fallen off my shoulders when I finally got back on my boat for the first time since November. It was cathartic and energizing. A rebirth so to speak.

On the morning of Easter Sunday, though a thin film of ice had formed overnight on my stern deck, the sun was shining and the waters of Shelter Island Sound and Gardiner’s Bay were flat calm. I was under power on my way to the lobster grounds to deposit my traps in the chilly 42-degree water for what I hope will be another productive season.

Last year, my catch of the tasty crustaceans was solid until the season came to a close shortly after Labor Day. Checking my freezer the other day, I even noticed that I still had a few bags of frozen meat to consume. Not a bad problem to have.

Arriving at my chosen spot that I’ve trapped at for nearly 25 years, I grimaced as I noticed some other lobster buoys of an unfamiliar marking lying still in the placid water. I had company. Someone did not waste time in setting their gear.

Much like the real estate game on terra firma, catching lobster is all about location. Lobsters feed mainly at night and enjoy the safety and comfort of residing near clumps of boulders, rocks, and other underwater debris. Setting traps close to such areas greatly enhances one’s chance of catching a few.

Feeling a bit dismayed that some other gear was in some of my favorite haunts, I took a slow ride back to port after putting my baited traps in the water. Sadly, windy weather early this week prevented me from checking on my gear. Only time will tell how well I did.

On the fishing scene, the action is still in early spring mode, but that should gradually improve with each warming day.

”There is a lot of bait moving into the bays now,” observed Ken Morse at Tight Lines Tackle in Sag Harbor, talking about bunker, spearing, mackerel, alewives, herring, sand eels, and other critters that are on the move. “But reports are few and far between. There are a few small striped bass in the coves behind Sag Harbor, but that’s been about it.”

Morse also did not have any news on the flounder front. “This weekend would have been our annual flounder derby but it’s now been nearly 20 years since we held it. It’s sad that so few fish are around.” Anglers, if they are lucky enough, are allowed to retain two flounder over 12 inches per day. The season closes at the end of May.

Morse also lamented that the spring season for blackfish is only open for the month of April. “It’s a farce,” he said. “The waters are too cold for a few to be caught, and those likely to be captured are females ready to spawn. Why even have it?”

Over at the Tackle Shop in Amagansett, the owner, Harvey Bennett, said that the action in freshwater ponds has been solid of late. “Carp are showing up nicely in many of the usual spots, and walleye and largemouth bass have been good at Fort Pond in Montauk,” he said. On the salty side, Bennett said that small striped bass are being taken in Three Mile Harbor and other inner coves and inlets.

Bennett, who is entering his 41st year in business, will have his shop open on weekends from 10 a.m. to 3 p.m., and by appointment. He will increase his hours by early May.

”It’s still early, but some stripers are being caught behind the WLNG tower in Sag Harbor Cove,” confirmed Sebastian Gorgone at Mrs. Sam’s Bait and Tackle in East Hampton.

Last year, Covid brought many more neophytes to enjoy the pleasures of fishing. As a result, like many other proprietors, Gorgone stocked up heavily over the winter on fishing gear for his shop, including rods, reels, lures, clam rakes, and other wares and paraphernalia. It was not an easy chore.

”I finally have tackle boxes for the first time since June,” he said, noting that Covid also significantly impacted the supply chain, as a majority of today’s tackle is manufactured overseas. “But I’m ready for the season.”

Out at Montauk, the owners of various charter and party boats are scrambling about the boatyards preparing their crafts to be shipshape for the upcoming season. While a few cod are being picked away south of Montauk, most anglers are focused on getting ready for the opening of the fluke season, which commences on May 4.

Time ticks down to better fishing days ahead.