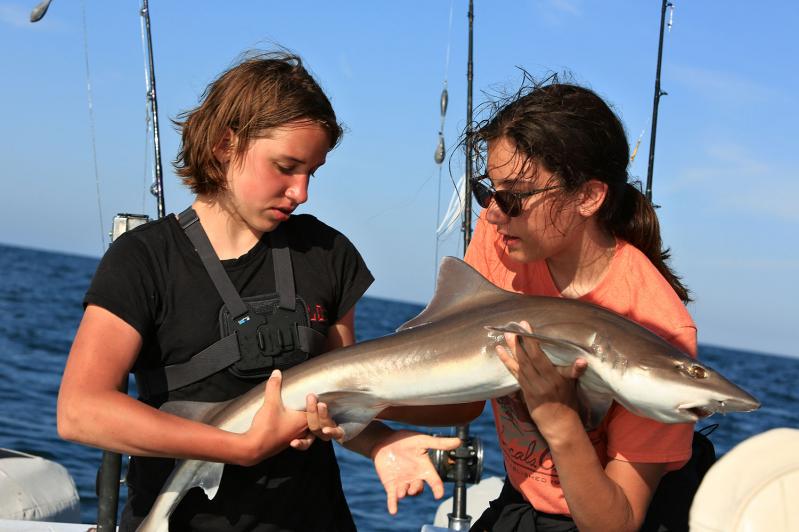 Ever since the blockbuster release of the film "Jaws" in 1975, great white sharks continue to swim through people's nightmares.

Several East End scientists are working to dispel the persistent public perception of white sharks, which prevents understanding their importance in the ocean, and their increasing vulnerability.

Dr. Curtis sees the waters off the South Fork as the "prime habitat for great whites and an important ecosystem in need of protection." Until recently, he said, there hadn't been much research on juvenile sharks, specifically on their migration patterns and habitat use. In fact, sharks are fished more than they are studied. "Sharks are vulnerable to fishing and a big part of [the] job is to prevent and protect them from it," Dr. Curtis said.

The first radio-frequency identification tagging device was invented in 1946 by Russian physicist Leon Theremin; however, it was not until the late 1960s that the devices were used on wild animals to better understand the spatial ecology of their lifestyles. Early radio tag technology was limited to tracking location. Since then, shark tagging has greatly progressed.

Modern technological advances have improved the research both qualitatively and quantitatively. Researchers are now able to monitor sharks via electronic tags that act as underwater receivers, which provide researchers and scientists with critical information on the species' migratory and movement patterns, as well as habitat use. "The satellites on the electronic tags provide depth and temperature data from the sharks' movements up and down the coasts and will provide data into migration patterns and habitat use," Dr. Curtis said.

Programmed to release from the shark's fin after a few days, "the satellite tags rise to the water's surface and all the data that is collected transfers to our computers in an email," Dr. Curtis said.

Craig O'Connell, a shark biologist, executive director of the O'Seas Conservation Foundation, and a Discovery Channel "Shark Week" host, worries about vulnerable shark populations in the near future. Dr. O'Connell believes shark tagging is essential for conservation purposes. To combat human sources of shark mortality, he believes that shark tagging can "minimize shark bycatch in commercial longline and gillnet fisheries." He also believes that if people are reluctant to minimize humans' impact on sharks "we will be in trouble and the possibility of losing certain shark species will become a very real reality."

Researchers and scientists use the data they collect through tagging to better understand migratory routes and habitat preferences of certain vulnerable shark species. By identifying the preferred geographical areas of various shark populations, "we can share this information to help relevant agencies implement management plans or at least to promote awareness in the local communities so these critical habitats can be protected as best as possible," said Dr. O'Connell.

Shark tagging is not without its complications -- or controversy -- in terms of the potential harm shark subjects experience when they're tagged. As sharks have fewer nerve cells than humans, however, "we can say with certainty that these sharks do not have the neurological apparatus or the nerve endings to experience pain the way we do," Dr. O'Connell explained.

Dr. O'Connell also says news outlets and television need to move away from portraying sharks as the enemy of the sea but rather educate people about the "true beauty" of sharks. In the future, he hopes that "news outlets will . . . do a better job and properly depicting the true nature of these charismatic animals."