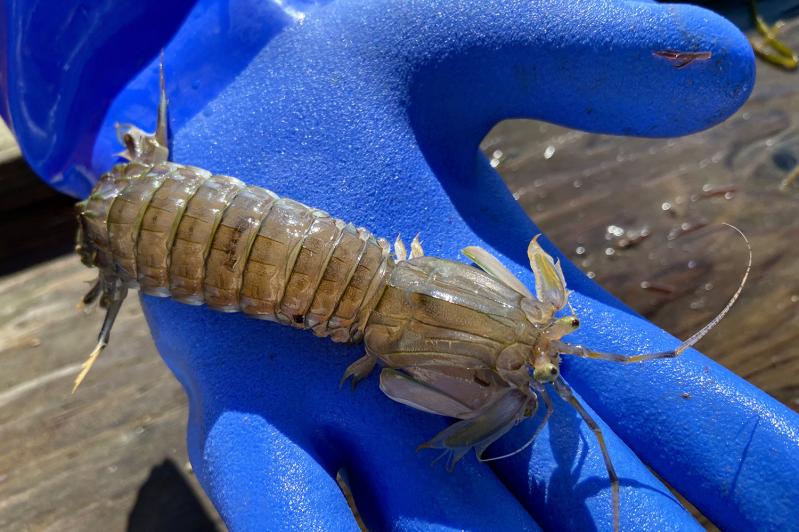 For many years I’ve noticed numerous symmetrical holes measuring about an inch in diameter, driven deep into the soft brown mud and sand near where I dock my boat in the innermost reaches of Sag Harbor Cove. They are clear to see by the naked eye, especially at low tide.

Who created and resides in such dwellings? Large sea worms? Perhaps the elongated siphons of clams seeking to breathe? Crabs or eels seeking refuge?

“They’re mantis shrimp,” said Capt. Harvey Bennett, the former longtime proprietor of the Tackle Shop in Amagansett and a 13th-generation Bonacker. The East End clan from which Bennett descends has a long fishing history and an expertise beyond compare. But when it comes to mantis shrimp, Bennett, like just about everyone else I’ve come across, is a bit confounded. These decapod crustaceans are mysterious, not only to him but to marine scientists as well. They are not the typical shrimp you find served chilled with cocktail sauce on the side at your favorite restaurant.

That said, Bennett acknowledges that they abound in great quantities, especially to the west in the inner bays of the Peconic Bay estuary system leading out to Gardiner’s Bay.

“You rarely will ever see one crawling around during the day,” he explained. “They are a mystery to many, but they are here more than you’d ever think. You’d be very surprised.”

Bennett was dead-on in his observation. For as many years as I can count, the bellies of striped bass taken in the bays that have lain upon my fillet table in spring have sometimes been loaded with mantis shrimp, which can grow to upward of six inches in length.

Bass, like many people, love to eat shrimp. Who can blame them? They’re delicious. Weakfish also partake of them.

“Many years ago, I heard locals here would use them as bait to catch striped bass,” Bennett added. “But they are very difficult to catch.” As such, there has never been a direct commercial fishery for them, even though they make great table fare.

Bennett recalled that there used to be a large population of such shrimp in and around Cedar Point in Northwest Harbor. “Mantis are a very unique species that marine scientists still don’t have much detail on, even though there are over 400 species of them worldwide.”

“They are also nasty too,” Bennett said. “They may look harmless, but look out. Their pincher claws pack a real mean punch.”

Called “sea locusts” by ancient Assyrians, “prawn killers” in Australia, and “thumb splitters” elsewhere because of their ability to inflict painful wounds if not handled carefully, mantis shrimp are equipped with a pair of powerful raptorial-like claws that are used to attack and kill prey either by spearing, stunning, or dismembering. Take note: These shrimps mean business.

“They are truly an incredible, yet little known creature around here,” added Bennett. “But they obviously serve a purpose in the circle of life in our local waters.” True that.

On the local fishing scene, it can be officially confirmed that Montauk has been infiltrated with a plethora of striped bass, many of which fall between the current 28-to-35-inch slot limit. As a reminder, anglers can retain one such fish per day. Bluefish too, have also made their welcome appearance, much to the delight of many.

Charter and head boats in recent days have put their fares upon school after school of such tasty fish. The fishing has been fast and furious for those using a bucktail jig or dropping a simple six-ounce diamond jig among the many rips located to the east off the Lighthouse. The action, when the tide is moving, has been intense at times.

Unlike mantis shrimp, the bass in Montauk have been feasting mainly on squid (not a bad option) and other baitfish, which have swarmed en masse in the past week. Large bluefish, up to a hefty 17 pounds, have also made their presence felt, just in time for the Memorial Day weekend.

Fluke too, have shown up in better quantities at Montauk. Like porgies? They have started on the feed in Cherry Harbor, on the west side of Gardiner’s Island, with fish up to three pounds being landed in recent days.

“Over the weekend, with the warm weather, the fishing really took off,” said Kathy Vegessi, the longtime shore support arm of the Lazybones, a popular half-day party boat out of Montauk. “The bait moved in along with the fluke and striped bass, as well as bluefish.”

Vegessi, who collects the tickets for the trips that depart at 8 a.m. and 1 p.m. daily, said the timing of good fishing could not be better, especially with the holiday weekend that’s on the doorstep.

The fish are here. It’s now up to you to get on the water.