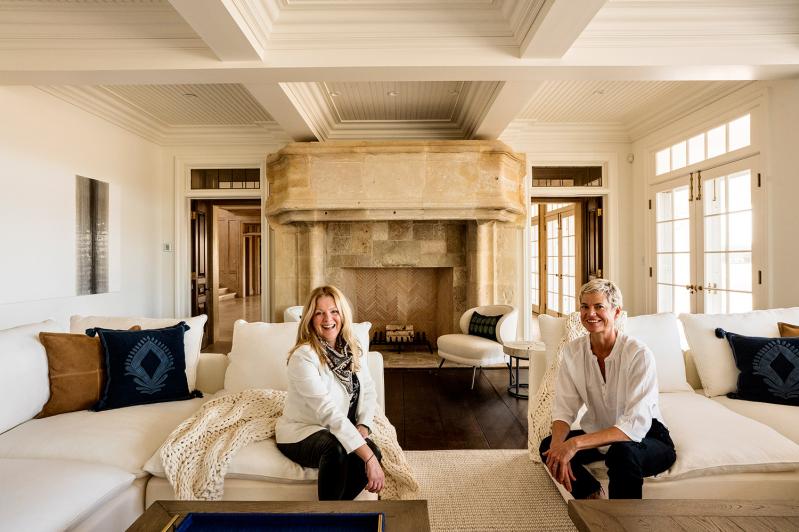 Who better to understand the power of collaborations between brands than two women with backgrounds in the fashion industry, which seems to rely on the constant merging of brands?

It started with their own collaboration: Nikki Butler and Brigitte Branconnier, friends and equals who in 2016 founded 100 Design Style, an interior design company that seems to strike the perfect balance between layout, light, color, tactile materials, and a connection to nature.

Recognizing that art has such a vital place in every interior, and spaces often feel naked without it, they quickly collaborated with Coco Myers, founder of Folioeast, which represents local artists. Together, they produced serene, art-filled homes.

This 360-approach to design was noticed by someone else who knows a lot about construction and interior design: Kristen Farrell, founder of the Farrell Design Group. She reached out to the pair, resulting in a collaboration between the two companies. Several home projects later, the partnership recently landed the design and renovation contract for a 300-room hotel in Manhattan, now underway.

Not bad for an idea that germinated six short years ago.

“We were sitting on the beach one day,” said Ms. Butler, who is South African.

“With a glass of wine,” added Ms. Branconnier, from Montreal.

Ms. Butler had spent years at the helm of a successful, multinational jewelry business. Vogue crowned her “Queen Bead” in 1998 as one of the first designers to make beads fashionable, while Ms. Branconnier had been in the footwear business, having started in Canada with the international chain Aldo. Both had enjoyed nomadic lives across the globe and arrived in East Hampton around 2012. They met as a result of having daughters of the same age.

“So, the kids were back to school,” Ms. Butler continued about the genesis of 100 Design. “Brigitte and I were at the end of being in the fashion industry and we realized that if we put our creative — “

“ — Minds together, that we could do something in the interior business out here. Our initial concept was custom-staging spec houses,” Ms. Butler said.

Creating lists of open houses to visit (Ms. Branconnier is also a licensed realtor), they would spend their days nosing around empty homes, then contact the builders or real estate agents, offering to turn a cold, uninhabited space into a warm and inviting home.

“Few people have the vision when looking at an empty house,” said Ms. Butler.

From there, they said, it was an almost natural progression to interior design. Buyers of their staged homes didn’t want leased furniture, but rather for the design duo to help them furnish them. They soon discovered that creating a home is so personal, evolving out of human stories and a relationship to a location. They wanted to be a part of that process.

“You go on this personal journey with the client and it’s just so lovely to see it all evolve. And how happy they are at the end,” said Ms. Butler, who describes 100 Design Style’s aesthetic as chic minimalism combined with sumptuous style, and one that gravitates toward varying textures and natural materials like wood, all presented in a neutral palette that’s full of depth.

Of course, after almost two years of being stuck at home, we’ve all come to realize how much our domestic environments contribute to our happiness.