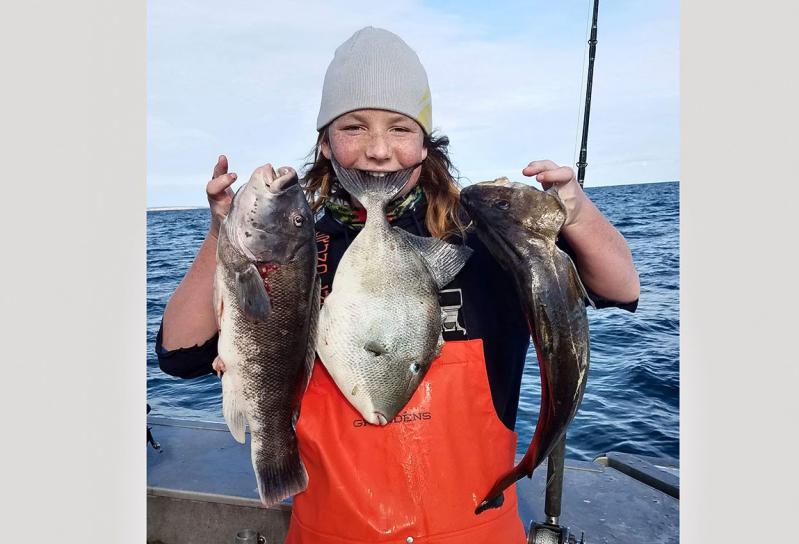 Finn O'Rourke of Montauk didn't have enough hands to display his catch of blackfish, triggerfish, and codfish while fishing on the Fisherman II out of Montauk on Sunday.
Capt. Paul Bruno
By Jon M. Diat

The fishing season is winding down. My boat is still in the water, but not for much longer.

I usually keep it docked until December to harvest my share of bay scallops, but with the season being a bust, I probably only have one or two trips to the blackfish grounds left. And much of that rests in the hands of the wind gods and whether they answer my prayers for calm weather.

Still, that does not mean that I will rest comfortably on the couch for the next few months, as we continue to wrestle with the ramifications of the pandemic. Social distancing will still be in vogue as I work in solitude to dig up clams -- hard and soft-shell -- gather oysters along the beach or from my holding cages, or tag along on a party boat out of Montauk at a chance for some codfish.

It also means I will have plenty of time to repair my lobster traps before they re-enter the water in late March along with my boat. But before all that happens, fingers are still crossed for a few more outings on the water, even if just to witness again the humpback whales that have been feasting on the massive schools of bunker that populate Gardiner's Bay.

"We had that incredible week of warm weather and it seemed to fool some people that it would last all of November," said Harvey Bennett at the Tackle Shop in Amagansett on Monday morning, noticing the chilly northwest winds that made it feel more like 34 degrees. "Still, the fishing for blackfish and sea bass remains strong and it should continue for a few more weeks, as the waters are still warmer than usual. Plus, the striped bass fishing along the beach remains very productive. The fish are smaller, but there are some keepers around too."

On a side note, Bennett will reduce his store hours to just Saturdays and by appointment for the remainder of the season. However, he will be open on Wednesday and Friday of Thanksgiving week, and all items in his establishment will be on sale.

"When the winds allow, the blackfish catches have been excellent," agreed Ken Morse at Tight Lines Tackle in Sag Harbor. "The fish are moving into deeper water now as the waters chill down."

Morse also continues to extol the fine fishing for striped bass from the ocean shoreline. "The bite is still good. Most of the fish are schoolies, but some keepers are still in the mix."

"Small bass along the beaches," said Sebastian Gorgone at Mrs. Sam's Bait and Tackle in East Hampton. "It's still good. And when you can get out, blackfish catches remain strong." Gorgone added that some folks are also landing squid in Three Mile Harbor, along with some mackerel.

Capt. Hugh Chancey of Chancey Charters out of Montauk concurs on the blackfish front. Chancey has been putting his fares onto solid numbers of fish up to 12 pounds, along with outstanding catches of black sea bass. A few cod are also showing up in deeper waters.

Note that the sea bass season concludes on Dec. 31, while the blackfish season comes to an end on Dec. 9 in Long Island Sound waters and Dec. 22 in all other areas.

Back on the bivalve front, the news on bay scallops locally remains bleak. A few commercial baymen took to the town waters of Three Mile Harbor last week when the season opened. The results were dismal, as only a few scant bushels of scallops were taken.

However, those who donned wetsuits in shallower water were fortunate to get enough for a few dinners. "It seems the divers have done pretty good in Three Mile Harbor from what I hear," said Gorgone. "Some guys are getting their bushel basket a day for their efforts."

If they are available, the price to purchase them has been steep. A friend of mine in East Hampton over the weekend paid $90 for a quart container. Another fish market had a few for $50 a pound. Ouch.

Up in Nantucket, the news has been better, with a decent amount landing on the culling boards. Prices for a shucked pound of the sweet morsels ranged anywhere between $16 and $22 on the island, and some of the Nantucket scallops have now worked their way into our local seafood stores, albeit at a much higher price.