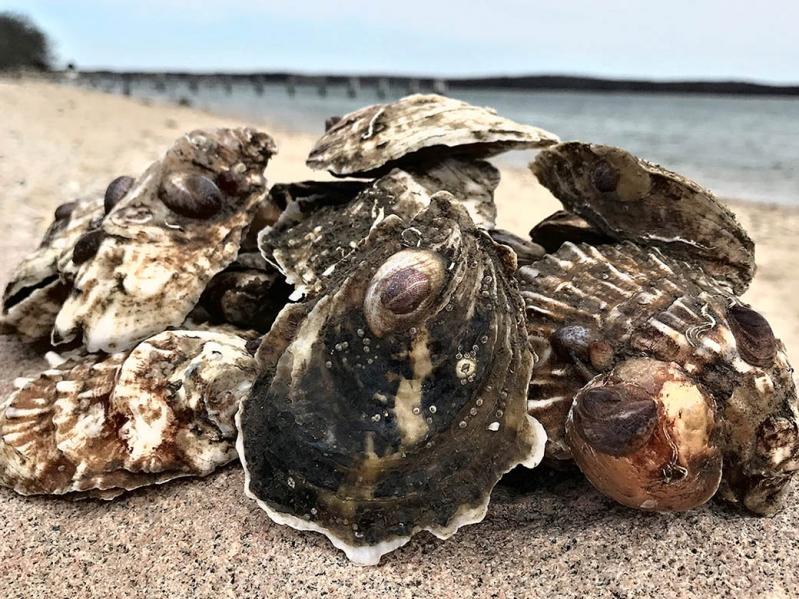 Oysters were on the menu this week for The Star’s fishing columnist.
Jon M. Diat
By Jon M. Diat

﻿It’s been a big adjustment being in home confinement, but with the outbreak of Covid-19 our daily lives have changed significantly.

Things we took so much for granted, like driving every morning to the local deli or coffee shop for a simple cup of Colombian and a buttered roll, have been altered. Going over to your neighbor’s house for dinner? Not now. Taking your kids to the playground? It’s closed.

It’s a new world, but life must go on, albeit in a way we have never experienced. I have hoarded a bunch of books to read in my spare time and have watched more than my fair share of CNBC and CNN, along with a healthy dose of “Billions” on Showtime and “The Flintstones” on the Cartoon Network. I’ve adjusted and I think I’m doing pretty well.

I’ve also recently taken advantage of several good low tides to dig up some hard and soft-shell clams by myself. Sunday’s dinner included some of the fattest steamers I’ve ever seen — plump, briny, and deliciously sweet. Only a squeeze of lemon was needed to enjoy them in their simplest form. Few dinners can match that, even in times of normalcy.

Oysters, too, have also been on the menu of late. I took the plunge so to speak last May when I bought young oyster spat from the Cornell Cooperative Extension facility in Southold. The oysters, which were barely the size of a dime at that time, have flourished at my neighbor’s dock the past year and a majority are already the perfect size to consume.

Much like the steamers, the oysters grew fat and sassy over the winter. While there are many ways to prepare oysters, I prefer them raw. I’m supposed to pick up my new set of spat at the end of May. Alas, the Southold facility is closed until further notice.

Despite below normal water temperatures, things are starting to open up on the fishing front at least, especially in areas west of Montauk. Striped bass have been on the prowl in local waters, bay and ocean, with some reaching the magic 28-to-35-inch-keeper range. Porgies, too, have appeared in the western Peconics and a fluke or two were landed on opening day on Monday.

“The weekend weather was nice, but the water temps still need to come up a bit more,” explained Ken Morse at Tight Lines Tackle on Bay Street in Sag Harbor. “The temperatures in the bay have returned to about 50 degrees, but that’s what we had two weeks ago. Also, reports from boats are a bit scarce as many still don’t have them in the water yet. But that should change soon.”

Morse said that striped bass are in residence in the back coves of Sag Harbor all the way westward to Jessup’s Neck, but the bite has been a bit picky on some days. “The bass fishing has been inconsistent. But the porgy fishing is coming on stronger every day over at Jessup’s, with fish up to 14 inches landed.”

Over at Mrs. Sam’s Bait and Tackle in East Hampton, the owner, Sebastian Gorgone, had a hard time keeping worms in stock last weekend. “It was a crazy weekend,” he said. “On Saturday, I sold out my inventory of 500 sand worms. I’ve never seen anything like it.”

Gorgone said that the striped bass fishing in Three Mile Harbor is “off the charts” and that porgy fishing has been gaining strength. “The great weather really brought the people out,” he added. “People are just itching to go fishing.”

“The casters are picking away on stripers from the beach,” proclaimed Harvey Bennett at the Tackle Shop in Amagansett. “Also, some big bluefish have shown up again near Accabonac and off of the ocean beaches in Amagansett.”

Bennett added that local pound traps are coming up with a mix of fluke and porgy, and that those fisheries should be available shortly for the hook and line crowd. “But the water temps are still cold for this time of year. We need a good, warm week of weather.”

Fully stocked with tackle and bait, including sand worms, Bennett plans to be open this weekend for curbside and delivery service. To place an order, he can be reached at 631-324-7770 or via email at [email protected].

“Over in Peconic Bay, the porgies are in their regular spots up around Jessup’s Neck, taking clam baits with a good amount of chum on the outgoing tide,” said Scott Jeffrey at East End Bait and Tackle in Hampton Bays. “But the incoming tide has been dead.”

Note to self: Read the tide chart before going fishing.

We welcome your fishing tips,  observations, and photographs at  [email protected]. You can find the “On the Water” column on Twitter at @ehstarfishing.