In the fall of 1974, my first life partner, the photographer Robert Giard, and I moved to Amagansett. Leaving behind New York City and the teaching jobs that had moored us there, we supported ourselves by painting houses and doing landscaping and odd jobs. Late that November, Sue Monell, the new principal of the Hampton Day School, called to ask if I would consider a part-time teaching position with the 3, 4, and 5-year-olds. The prospect of a steady income was attractive.

Visiting the school on Butter Lane in Bridgehampton, I immediately felt comfortable. Under Sue’s direction the school was foregrounding social studies as the core of a curriculum for young children. The South Fork provided a rich environment for exploring farming and fishing communities, for learning about fast-disappearing ways of life, and for meeting people like Richard Hendrickson, who collected Bridgehampton weath­er data every day for 83 years.

I was no stranger to this way of thinking about schooling. Five years earlier, when I was studying to become an early-childhood teacher at Bank Street College of Education in New York City, my adviser, Roger Cartwright, had casually handed me a dog-eared paperback copy of Caroline Pratt’s “I Learn From Children.” He thought it might interest me.

I was immediately drawn into Pratt’s memoir-cum-history of the City and Country School, just a few blocks south of the college. In the book she describes the genesis of a curriculum organized around jobs for children and designed to make school life and learning meaningful. Each year the 8-year-olds set up a post office and distributed mail throughout the building. The 9-year-olds ran a store selling supplies, and the 10-year-olds made signs announcing school events. Most impressively, the 11s operated a real printing press producing school forms, stationery, and newsletters.

Visiting City and Country I saw Pratt’s dictum, “Learning begins with life not with books,” in practice. My late-1960s sensibility, shaped by experiences at Columbia in 1968 followed by the Stonewall summer of 1969, resonated with the progressive commitment to growing activist citizens.

I am happy to say that “I Learn From Children” has recently appeared in a fourth edition, a handsome hardcover filled with intriguing pictures of children working and playing at the school over the last 100 years. The book was originally published in 1948. By her own admission, Pratt was a doer and a maker, not a writer or scholar. She was 83 when it first appeared. 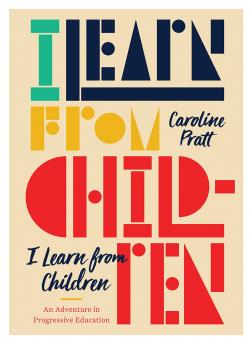 My immediate connection to Pratt’s work undoubtedly reflected my own educational history. Pedagogically speaking, I grew up next door to the City and Country School. I entered the Walden School in 1954 at age 10, the same year that Pratt died. Walden, like City and Country, was part of a cohort of progressive, or “experimental,” schools, as they called themselves, that sprang up shortly after the turn of the last century. Although each was different from the other, they all wanted to place the child and the child’s interests at the center of school life. Pratt wisely writes that children’s questions are best understood as provocations to learning rather than prompts in need of immediate answers.

Deeply respectful of children’s ways of knowing, Pratt reasoned that young children put their thoughts into actions rather than words. Striving to make a child-friendly environment, the classroom as flexible workshop rather than space with bolted-down desks, Pratt believed that it was the job of educators to provide children with appropriate materials, then step out of their way. In today’s jargon, teachers were to be guide on the side rather than sage on the stage, intervening only to ask their own judicious questions.

Pratt may be best known for creating the unit blocks, until recently a standard-issue material in early-childhood classrooms. While 19th-century educators like Friedrich Froebel had used all sorts of blocks to illustrate what they understood as philosophical truths, Pratt introduced the unit blocks as tools for children to re-present their lived experiences. Building cities and farms, hospitals and police stations, stores and homes, children learned about the social relationships that were embodied in the physical buildings. How does the farmer’s produce get to the city? How is it distributed once it arrives? How are stores organized to meet the needs of consumers?

In 1974 the Hampton Day School had plenty of blocks but did not have a jobs program. That would not have bothered Pratt. Indeed, Pratt’s reluctance to write about City and Country was predicated on a concern that a book would lead to slavish imitations of the school. Schools, she tells us, should be grounded in strong principles and values and should be organic institutions growing as local conditions warrant.

Two and a half decades after leaving the Hampton Day School I again found myself on Butter Lane, now working with the staff of the Hayground School. Here was another school that appeared to be quite different from City and County but quickly revealed a heart and soul bearing deep sympathies. At Hayground I saw a commitment to fostering lifelong learners by offering experiences that engaged children in answering their own questions about the world around them. Watching and waiting rather than rushing in to answer questions and solve problems for the children, the caring adults knew how to exercise an increasingly hard-to-find quality in schools these days, pedagogical tact.

The experimental schools of the 20th century welcomed those who lived on the margins. At Walden my classmates included the offspring of writers and performers who had been blacklisted in Hollywood. Other students, like myself, resisted the lock-step, narrow curriculum offered by many public schools. Later, when I entered Bank Street College, founded by a former colleague of Caroline Pratt’s, Lucy Sprague Mitchell, I experienced none of the suspicions that shadowed the lives of men who chose to work with young children, suspicions based on equating homosexuality with pedophilia.

Still, this was the era of the glass closet, and as a gay man I lived in the space between acceptance and articulation. At the time, I did not realize that Caroline Pratt’s life partner was Helen Marot, a labor activist she met in Philadelphia while both were in their 20s. Together they raised the birth control pioneer Margaret Sanger’s children when she was forced to leave the country. Many progressive leaders were women, some lesbians, like Elisabeth Irwin, who founded the Little Red School House while partnered with Katharine Anthony and raising two children. Reading the historical record now, I take pride and courage in knowing that I am part of a queer educator lineage.

Why write about a book that describes a school founded over 100 years ago? At the very least, the latest reports of dismal performance by American students, contrasted to those in other industrialized countries, tell us that many schools aren’t educating effectively. Pratt and her colleagues knew how to engage students and make schooling meaningful.

Just as important, living in an era that had seen extreme poverty and threats to democratic values, they knew that children who had experienced participatory democracy in the classroom would grow up to be adults who valued difference and community. Unabashedly they wanted to foster activist citizens who would fight for social justice.

Today more than ever, we need to attend to Caroline Pratt’s lessons about how to make schools work for individual children and for a more equitable society.

Jonathan Silin, a resident of Amagansett and Toronto, is the author of “Early Childhood, Aging, and the Life Cycle: Mapping Common Ground.” He’s online at JonathanSilin.com.