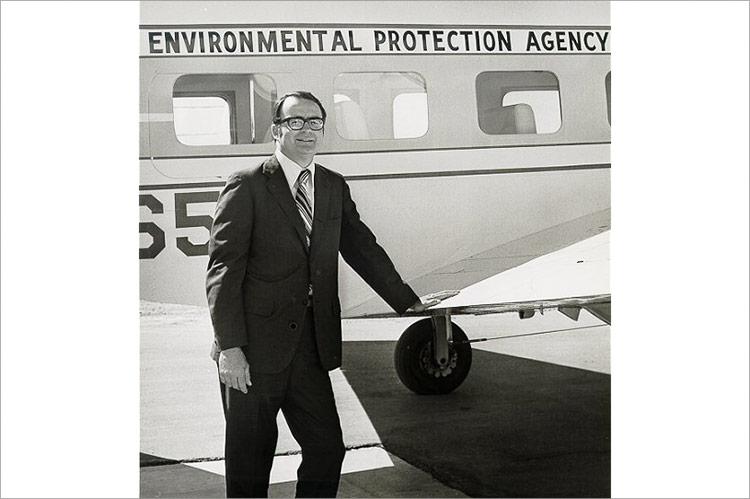 Hoosier stalwart William Doyle Ruckelshaus died last week. He would have wrung his hands had he lived a few more days to hear United Nations Secretary-General Antonio Guterres open a world climate summit on Monday with the anguishing news that CO2 concentration has risen to 408 parts per million — higher than the 400 ppm level scientists considered catastrophic.

In his younger days, he would not just have wrung his hands. He would have taken action. I have looked up to him for as long as I can remember as a principled government official whose life was dedicated to environmental leadership. He initiated the first-ever comprehensive environmental study of Long Island Sound from 1972 to 1975.

Ruckelshaus grew up in Indianapolis before attending Portsmouth Abbey School in Rhode Island, graduating in 1951. I entered Portsmouth four years after he left and was a Harvard undergraduate when he was at Harvard Law School.

His core beliefs were nurtured by a family that was Republican and conservationist for generations. His grandfather was chairman of the Indiana Republican Party in 1900 and his father was a five-time platform chairman at the G.O.P. Convention. Young Ruckelshaus learned to love and respect nature on fishing trips with his father in upstate Michigan. After Harvard Law School he went back to Indiana, was elected to the Assembly, and at 35 was its majority leader.

As a young lawyer, Ruckelshaus saved the view and waterfront of Portsmouth Abbey School. It was threatened with the proposed siting of an oil refinery on Prudence Island, opposite the school. Ruckelshaus filed a federal lawsuit and won. Perhaps out of gratitude, the school later built the first-ever utility-scale wind turbine in the State of Rhode Island. It won the 2007 Environmental Merit Award from the Environmental Protection Agency.

When the E.P.A. was created in 1970, Ruckelshaus served as its first administrator. The agency consolidated existing environmental research, setting of standards, monitoring, and enforcement activities. “There was huge resistance from the auto industry,” Ruckelshaus said in 2015, “they pushed back very hard. The difference from then until now is that the public demanded something be done about pollution and the government listened.”

Perhaps because of his experience with the Prudence Island scare, Ruckelshaus commissioned the study of Long Island Sound, thus bringing to the Island’s waterways the attention they needed.

The third in command, Robert H. Bork, followed orders. He fired Cox and abolished the office of Watergate prosecutor. The next day, 300,000 telegrams of outrage descended on the White House, and Nixon decided to release the nine tapes. But by then it was too late for him.

Three G.O.P. members of the House Judiciary Committee who had voted against Nixon’s impeachment — Representatives Charles Sandman (N.J.), Charles Wiggins (Calif.), and David Dennis (Ind.) — reversed themselves after hearing the tapes. They said they would vote for impeachment on the floor of the House. Nixon resigned before that could happen.

Not long after the “massacre,” when Ruckelshaus was in private practice of law, he was kind enough to take me to a memorable lunch at the Hay-Adams Hotel in D.C. to share his front-row experience. I asked how he felt about Nixon, after it was all over. He replied with finality, very simply: “The president was an unindicted co-conspirator.” I was deeply impressed with his courage and serenity in the face of all he had been through.

After he returned to Washington from 1983 to 1985 under President Reagan to straighten out the E.P.A., it became clear from news reports that Ruckelshaus was increasingly distressed at the steady decline of the progressive wing of the Republican Party. His sentiments about the party were similar to those of Reagan, who once said, “I never left the Democratic Party; it left me.”

President Obama awarded Ruckelshaus the Medal of Freedom in 2015 for his environmental achievements. A few days before the ceremony, as the race to succeed Obama was underway, The Guardian interviewed Ruckelshaus and quoted him:

“I don’t know what Trump actually knows about climate change, I don’t think Trump thinks much about many of the issues. . . . That comes down to not dealing with it. It’s concerning and I don’t understand why they don’t see this as an opportunity rather than something to be denied. . . . The atmosphere today is completely different to the 1970s; Republicans’ arguments are all partisan driven, they aren’t based on any legitimate analysis of science.”

As East Hampton seeks to live up to its leadership commitment to a transition to renewable energy, it is being challenged to create its South Fork Wind Farm and expand solar energy. In this, we may derive some inspiration from the life’s work of a great American, William D. Ruckelshaus.

John Tepper Marlin has been a Springs resident since 1981. He serves in Washington, D.C., as senior economist for the Joint Economic Committee of the Congress.