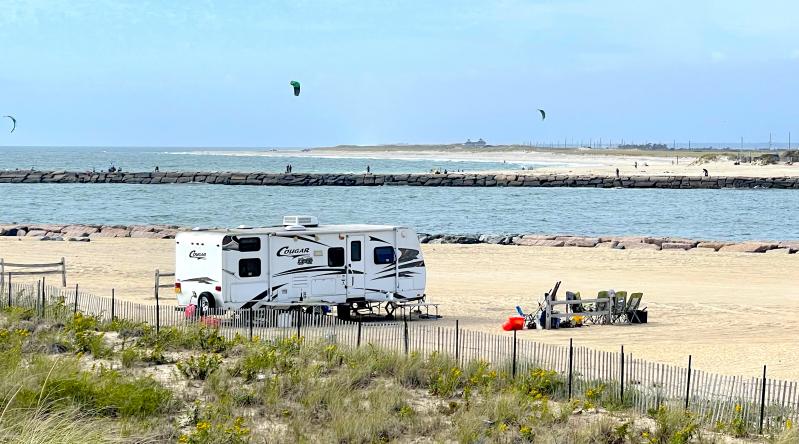 My father loves to spin a good story and he was taking full advantage of his captive audience. The road took us east from Brooklyn to eastern Long Island, but his words took us back in time. I sat in the passenger seat, while my 12-year-old son slept in the back, but as my father spoke, I imagined us sitting three across in his red 1965 El Camino with bucket seats, boards in the back, heading to his surfing haunts from over 50 years ago.

My father grew up in Huntington, a native Long Islander whose family had arrived in the early 1600s, but his generation left the ancestral homeland for school, jobs, and spouses. I was raising my family in Brooklyn and wanted my son to experience Long Island through my father’s eyes before that connection was severed forever.

Huntington sits on the North Shore, where waves from Long Island Sound lap gently. To surf, he and his friends went east, to the Atlantic Ocean. I asked him for the names of the beaches where he planned to take us, so I could plug them into Google Maps. Not that we needed directions. He drove from memory. I typed in Water Mill, Flying Point and W. Scott Cameron Beaches, and Shinnecock East County Park. Zooming the map view out, looking for a literal lay of the land, I was surprised to see that we would be spending the day puttering through the Hamptons.

My father never described the area as the Hamptons. No one did. To him, the Hamptons were not a collection of vacation towns filled with second homes, but his extended backyard of beaches where he’d fallen in love with this new, trending sport.

My father got into surfing as a high school upperclassman, in the summers of 1963 and ’64. He would drive the family VW Bug, boards tied to the roof rack, until he bought the El Camino. In ’63 the radio played the Beach Boys’ “Surfin’ U.S.A.,” the music ushering the sport from fringe to mainstream. In those early years, Long Island held its own with California as an epicenter, but my father was a bit younger than the true mavericks. He was quick to say that he was hardly a pioneer, but he was riding with that forefront of young people, alongside them as they searched the shores of L.I. for surfable breaks.

We passed the L.I.E. exit to Huntington, meaning we were officially at the trailhead of his trek east from years ago. The shoulders widened, and the trees eased from evergreens to scrub oaks of uniform height, creating the eerie flat that is the eastern half of Long Island. The cars coming toward us in the opposite lanes were the only visual tie to the 21st century, but all I saw were the ’60s-style automobiles, surfboards also on top or in the back. My father said the telltale boards identified “surf-minded” comrades, and they would slow as they passed, the ones returning from the east rating the conditions with a thumbs-up or down.

We hit Flying Point Road and took it to the end, where we parked and climbed the path over the dune to the Water Mill beach. Many were taking advantage of the 80-degree October day, but no surfers.

“This is where we would pitch our tent,” he said, pointing to the ground just feet in front of us. They would camp for days at a time, surfing their once secret, and eventually not-so-secret, spot. “Interlopers came after we ‘discovered’ it and named it The Birds.” Turning toward the row of beachfront properties, he pointed out the house rented by a friend’s uncle, the cartoonist Irwin Hansen. “He let us use the outdoor shower to clean up.”

My father explained how a breakthrough flow from Mecox Bay would push sand through W. Scott Cameron Beach, creating the break on the ocean side, but as we stood there, a strong onshore wind created a choppy froth, making it impossible to know if the spot was still surfable at all. We blocked our eyes against the harsh glare of the autumn sun, each lost in our own imaginings of what that beach once was.

Back at the car, we knocked the sand from our shoes, but before heading to the next stop, my father made a swing through the parking lot at Flying Point Beach. Asphalt-covered spaces had replaced a dune where he had spent a memorable night at the end of his senior year of high school. He and two friends drove to Flying Point for a private graduation celebration where first hangovers were the parting gift. My father waxed nostalgically about chasing a friend down the dune to the ocean, in the dark, all of them too inebriated to swim, and too young to know better.

“We were drunk and stupid,” he said. We turned to admonish my son’s enthusiastic laugh. It was a different time. Recreating such an experience would be unwise for a number of reasons. Though I doubted our smile-filled warnings held any weight at all.

With that we were off to Shinnecock Bay, our route taking us past Stony Brook Southampton Hospital, launching my father into a favorite story. Once, surfing Flying Point on the Fourth of July, he wiped out, the fin of his board connecting with his head, slicing through the top of his ear near his skull. “Well,” said the attending in the holiday-deserted E.R., “I’ve never done an ear before.” His stitches produced a notch in the cartilage at the top of my father’s ear where the two sides still meet at a more-than-near miss.

We continued on Meadow Lane, which runs down the small strip of land between Shinnecock Bay and the Atlantic Ocean. Now paved, it was once a sandy road where you had to keep up a good pace to avoid getting stuck. With no visible land left to develop, it was hard to imagine the road was ever a single path through wilderness leading to a beach.

Meadow Lane dead-ended at our next destination, Shinnecock East County Park. Even in October, there were a few R.V.s and Airstreams, taking advantage of the overnight parking. We hiked through the lot, larger than my father remembered, to the beach and one of two surf breaks straddling the Shinnecock Inlet. “Flies was the name of the inside break at Shinnecock.” He went on to describe the constantly changing conditions that would often leave one side of the inlet flat while the wave broke on the other. Nothing was more frustrating than arriving at the wrong one. As travel to the other necessitated the trip down Meadow Lane and circling all the way around the bay, they were often tempted to paddle across the causeway, the shortest path between the two points, but never got up the nerve.

Far down the beach, almost out of sight, we saw surfers, the only ones we would see all day.

Retracing our path, back up Meadow Lane, we turned up Halsey Neck Lane before driving west to take the Ponquogue Bridge to complete the loop. My father didn’t recognize it, because in 1986 the modern one replaced a wooden drawbridge. As I read the information on Wikipedia, I could almost see the older bridge reflected in his eyes. “That sounds right.”

For lunch we went straight to Oakland’s, another new addition since my father’s time, clearly built to entertain the summer masses. Even with a fair number of autumn diners, we snagged a window seat overlooking the beach at Charles F. Altenkirch County Park. We spent the meal chatting about the Hamptons and all the changes to the string of towns, whose sleepy predecessors were once my father’s playground.

Our tour ended with a walk along the stone wall on the Altenkirch side of the causeway. The parking lot was full, but not with surfers. We had arrived in the middle of fishing season.

My son and I were both asleep in the car before we even reached the L.I.E. Back on the Jackie Robinson, I woke to bumper-to-bumper traffic as people headed into the city for Saturday evening plans. The clouds overhead formed a pattern I’d never seen before, repeating rows of symmetrical dashes, as though we were looking down on a pattern of waves in the ocean. It felt as though the heavens themselves had conspired in a spectacular display, a memorable final touch as our journey came to an end.

Walking back from the car, I turned to my son, looking for his impressions of surfing, Long Island, and the Hamptons.

“I will never forget today,” was all he had to say.

We had gone to beaches and talked surfing for hours, but I’d found exactly what I had been seeking — a connection to the past, a new home for my father’s stories in the next generation.

Katie Sammis has written about marriage, relationships, and parenting for The New York Times.