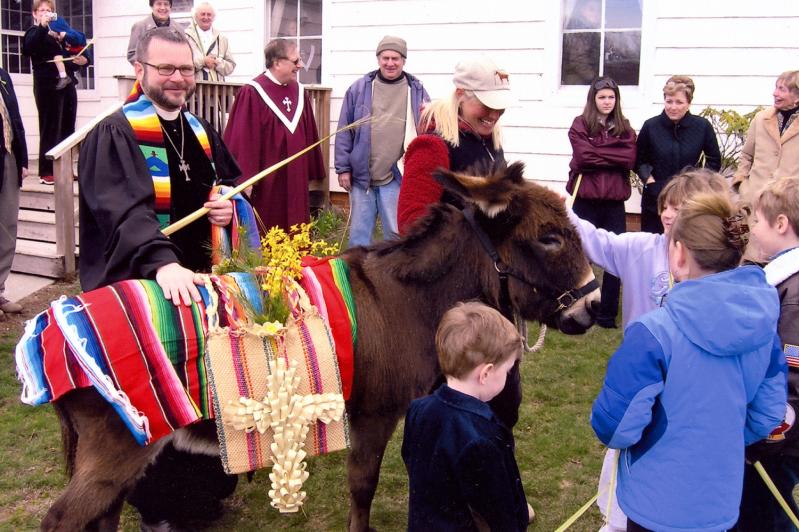 A Palm Sunday service with the Rev. Joe Hinds, who served the Springs Community Presbyterian Church from 2002 to 2007. Bill Henderson is at center rear.
Courtesy of Robert Stuart
By Bill Henderson

This year our little church by Accabonac Creek, the Springs Community Presbyterian Church, celebrates its 140th year. I call it one of the great cathedrals of the world.

If you doubt that we match the stained glass and soaring spires of Chartres, just look out over the creek, the harbor, the bay to Montauk Point and the open ocean beyond. No other cathedral can match that splendor. One hundred and forty years ago the builders of this little church knew exactly what we should be celebrating.

Thirty-two years ago, I walked into this church reluctantly. I had vowed never to get near a church again after a boyhood of loving but fundamentalist indoctrination where questions were not appreciated and doubt was a no-no. But in 1990 my wife, Genie, wanted our daughter, Lily, to at least have an idea of church traditions.

One winter Sunday we were blanketed by a blizzard. I insisted on driving Genie and Lily down Fireplace Road, fearing an accident, and once at the church I convinced myself to walk in.

I found here a home of good, kind people dedicated to the survival of our congregation despite all the odds against us, including waves of people who have abandoned Christianity, disgusted that the name of Christ, that rebel rabbi of love and nonviolence, has been taken over by a radical rifle-toting mob who think that “the whole armor of God” mentioned in the Bible means bulletproof vests and military rifles used to butcher little kids, Blacks, Jews, and fellow Christians. Just a few weeks ago these Christian nationalists held a raucous convention in Nashville and vowed to eliminate democracy and install a country in line with their peculiar theology.

It is no news to all of us that we have become a violent country. Hundreds of people shot in mass murders this year alone. Where is this violence coming from? What is the inspiration? How can a gentle man named Jesus be the source for people like our ex-president, who held up a Bible in front of a church to prove his credentials as a believer? In what? As he said, “My favorite verse in the Bible is ‘an eye for an eye and a tooth for a tooth.’ ”

I would suggest that our own Bible is one of the sources of our violence.

Let’s start with Genesis — the great flood. A metaphor? Historical event? Whatever — this God saw fit to kill millions of people, including innocent children. Later in the Bible, the prophet Elisha is mocked for his bald head by 42 children. So God has two she-bears arrive and devour the 42 children.

Or King David, man of God, who took great delight in slaughtering the Philistines and Bathsheba’s husband. Or jump over Jesus and his rebel idea of forgiveness and radical kindness to the Book of Revelation, the final and most bloody book in the Bible, with Jesus making an appearance as a murderous avenger.

My friends are amazed I still call myself a would-be Christian. They consider the hypocrites who still support an ex-president who is a racist, a liar, a philanderer, and woman abuser, a cruel narcissistic would-be tyrant who once called himself a Presbyterian.

Christ was about love, forgiveness — a gentle man who abhorred violence. He was surrounded by a vicious Roman occupation and a rule-bound, organized religion. They killed him for daring to point to a different idea — a God of love, compassion, healing, empathy.

This is the person Christians have worshiped over 2,000 years about whom organized religion — and yes, I include our own Presbyterian structure — has made up rules and myths such as walking on water, rising from the dead, casting some of us into hellfire, including unbaptized babies. Don’t forget the Crusades, the Inquisition, the endless stream of wars fought in his name. All these ridiculous and blasphemous ideas and adventures in the name of the Prince of Peace.

My answer comes from Wendell Berry, Kentucky farmer and poet, who sums up what I think must be our theology for the next 140 years. “I take literally the statement in the Gospel of John that God loves the world. I believe that the world was created and approved by love, that it subsists, coheres, and endures by love, and that, in so far as it is redeemable, it can be redeemed only by love. I believe that divine love, incarnate and indwelling in the world, summons the world always toward wholeness, which is ultimately reconciliation and atonement with God.”

Bill Henderson is an elder in the Springs Community Presbyterian Church, which will celebrate its 140th year with a fund-raiser on Aug. 14. He is the editor of the annual Pushcart Prize, and his latest book is a poetry collection, "The Family Bible."

A Holiday Gift for Surfers and Beach Lovers
Holiday Lights Go On at the Lighthouse Saturday
Covid Vaccine Clinic at St. Luke's
END_OF_DOCUMENT_TOKEN_TO_BE_REPLACED