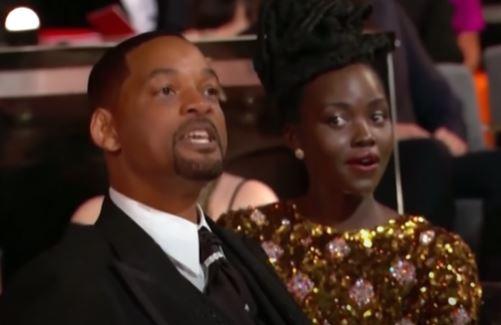 A screen shot of Will Smith at the March 27 Oscars ceremony in Los Angeles.
ABC / Academy of Motion Picture Arts and Sciences
By Bruce Buschel

Yes, children, if you are rich and famous and muscular and well connected, you can commit public acts of violence and call it defense. You can indulge in toxic masculinity and call it chivalry. No, children, we are not talking about Vladimir Putin. We are talking about Will Smith.

Poor confused Will Smith. There he was, sitting ringside on what should have been a glorious Oscar night, surrounded by friends and colleagues, and he couldn’t remember if he had been nominated for “Concussion” or “I Am Legend” or “Wild Wild West” or “Ali” or “King Richard.” So he just combined all his favorite roles and stomped onstage and “hitch” slapped Chris Rock.

Slapped? Yes, children, a slap is more demeaning than a punch, bordering on emasculation. A slap is the deeper disrespect in the Black community since slave masters would mete out punishment in such a manner. A slap will not break a jaw and invite a giant lawsuit by a comedian about to go on tour. And a slap, anatomically, stuns more nerves and tends to render momentary paralysis, silencing the slappee. But not Chris Rock. He kept rockin’ even as the woke crowd fell into a mysterious slumber — as if they too had been slapped.

Mr. Rock, it should be noted, has long been preoccupied by the bobs and weaves of Black women, as he made clear in his documentary “Good Hair.” He most likely knew that Jada Pinkett Smith’s bald look was not a fashion statement but the result of alopecia; still, he saw an improv joke and jumped on it. That it made reference to “G.I. Jane,” a mediocre movie from 25 years before, might deserve a slap on the wrist, not the face. His job, after all, was to prick the pretentious and show the world how these self-aggrandizing movie folk had a sense of humor and could take a punch line.

Poor confused Will Smith. He failed the test. One look from Lady Jada and the Fresh Prince became the Fresh King. He equated Richard Williams’s protection of his young daughters, Serena and Venus, to his “protection” of his wife, as if she too were a helpless little girl. Had he watched his own movie, he would have known that Richard Williams defended his girls by instilling fierce independence and self-reliance, not by slapping their opponents. The only physical violence in “King Richard” was perpetrated upon yellow tennis balls.

Poor confused Will Smith. Love will make a man do crazy things, said King Richard II. No, Your Highness, love does not make a man attack a diminutive African-American comic in front of a global audience — fear and insecurity make you aggressive, a lust for dominance and/or self-destruction. Did you really think that your wife and children would feel safer after witnessing you lose your ever-lovin’ mind and call it love? What might that same man do in private when he loses his temper?

Poor confused Will Smith. After the slap, he strutted back to his seat and screamed at the top of his lungs: “Keep my wife’s name out your f’ing mouth.”

During his rambling soliloquy, he confided that Denzel Washington had whispered something quasi-Shakespearean into his royal ear earlier in the evening. When Macbeth advises King Richard II, confusion doth reign. Did Denzel go all Richard III and mutter “To entertain these fair well-spoken days, / I am determined to prove a villain / and hate the idle pleasures of these days”? No. Macbeth went semi-Bard and full-on Reefer: “At your highest moment, be careful — that’s when the Devil comes for you.”

Poor confused Will Smith. Now he could blame Chris Rock and Richard Williams and the Devil and intimated that it was the slings and arrows of the media, as well as a fan base that didn’t realize a brother from the City of Brotherly Love had feelings and frailties and a family. A minute later, however, King Richard II said criticisms and barbs were all part of the game that came with hyper-celebrity. Was it a speech of acceptance or fury? A back slap or a slap back?

One wonders how the Twittisphere would have reacted had Jada done the slapping. Would women applaud or condemn? Between A.O.C. and Laura Ingraham, who would raise a fist and who would have a fit? One also wonders if the Fresh King would have slapped Billy Crystal or Ricky Gervais or Amy Schumer for the exact same joke. And what the authorities would have done had the victim not been a famous Black man who kept his cool.

There is a long history between the Smiths and Chris Rock, who, it could be said, took the Big Slap like a man, but that would be more toxic masculinity. So he took it like a woman? No, that doesn’t work. He took it like a pro and went on with the show, shaken, not stirred. The stand-up comedian took it standing up because he has been lying down on a therapist’s couch seven days a week for the past five years, spending a zillion billable hours reliving being bullied as a kid for being “smallish” at his first school and Black at his second. This moment was no doubt a trigger, but he knew how to keep his gun in the holster.

Poor confused Will Smith. He did not. Perchance, he ought read “Richard II,” Act II, Scene I:

Bruce Buschel is a writer who lives in Bridgehampton.