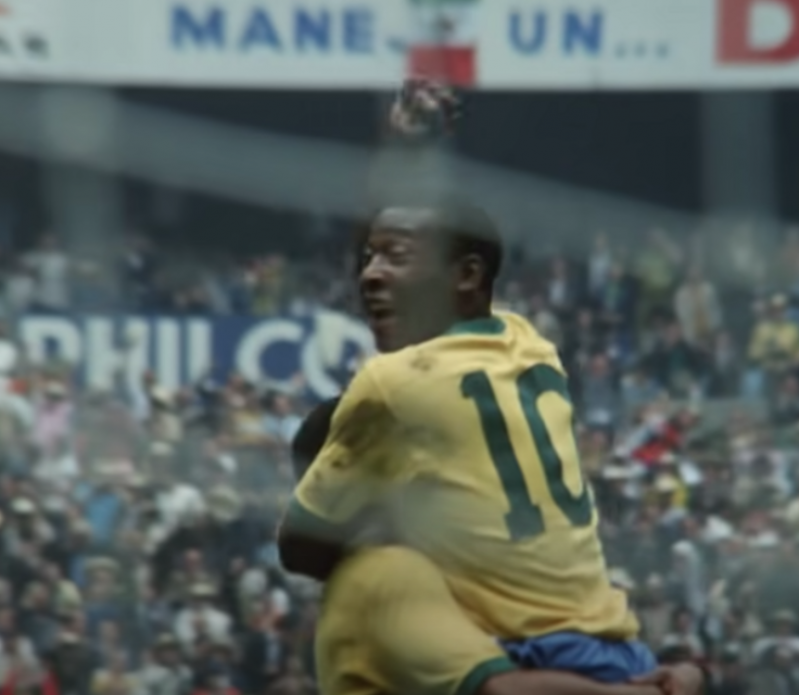 Pelé after scoring against Italy in the 1970 World Cup final in Mexico.
FIFA TV / YouTube
By Susan Israelson

The pictures of Pelé flashing on TV as FIFA World Cup fever spreads from Qatar to Queens bring back memories of my "date" with him. A local hero as well, he was a 37-year resident of Waterhole Road on the waterfront in Springs. It all began with a very different athletic activity — disco roller-skating.

Elaine's, table four, late night, early 1981. I was a copywriter at Foote, Cone & Belding — a pressure cooker. I was chilling out to beat flaming out. A guy who looked like a Jewish Ben Franklin handed me his embossed card: "Steven Greenberg, President, Anametrics." Whatever that was. Among other things, he was a partner in a brand-new roller disco club in Chelsea, the Roxy.

"Hot, the Studio 54 of roller rinks, a party tomorrow night, like to go? You can rent skates if you don't own them." I didn't. My last ones, metal that clamped onto my shoes, needed a key.

It was the fastest "yes" in the East.

Olivia Newton-John was singing "Let's get physical, physical." An invitation. Colored spotlights strobed, illuminating skaters. But there was a rental glitch. My wide feet. And bunions. The fourth pair was the charm. Wobbly but intrepid, I was soon at ease, an instant regular.

I dashed to Bloomingdale's the next morning, and there they were. Caramel calfskin roller shoe-skates, blue and red wheels with a yellow stopper. Gorgeous. A score for $90.

After skating the next Thursday — New York's Saturday night — my friend Lili and I cabbed to Cafe Un Deux Trois on West 44th Street, a happening new French brasserie, where a bunch of guys surrounded someone in the corner. One moved to reveal — wait — Pelé. I had to get his autograph to repay my brother, who'd gotten me the tennis idol Bjorn Borg's.

Lili and I pooled info. Soccer. Brazilian national treasure. Number 10 for the New York Cosmos, $7 million contract. Mega star. She drily opined, "He's possibly the most famous athlete on the planet." This did not make it easier. I downed a Dewar's on the rocks, draped my skates over my shoulders for security, hovered, got my nerve up, and held on to Lili's elbow.

Pelé sat front and center on a banquette, holding court, royalty. "Excuse me, sir, may I have your autograph?" The "sir" sounded wrong. It didn't matter; he didn't speak English.

One of his entourage translated, "Edson, she wants your autograph." I echoed it. I spoke Spanish.

Pelé looked me in the eye, smiled that smile, and said, in my rough translation, "Sure, as long as you give me your phone number."

I was shocked. My phone number for his autograph. A trade. A pass, perhaps. He kept smiling, pointed at my skates, gave me a thumbs-up. He liked them.

I liked him, smiled back, nodded my head. After a scramble, someone offered me a match cover and pencil for my number.

I tore off a piece of a paper place mat and he signed "Pelé" with a flourish. The deal was done.

He phoned quickly, on a Friday, and we made plans for Tuesday. He'd come by at 5 to pick me up. Please dress up, he said. Music to my ears. I'd leave work early. A once-in-a-lifetime offer.

Meanwhile, back at Bloomie's, I struck gold with a cold-shoulder, swinging black mini. I'd wear it with long pearls, kinda Liza.

Eddie, the disgruntled doorman at my one-bedroom Upper East Side co-op, grumbled over the intercom in his deep Bronx accent, "Pelé." Did I detect a lilt?

He wore a gray silk suit, a shirt and tie. Not that tall, he was maybe 5-7. He looked around my pad, spied my skates parked at the ready against a taxicab-yellow wall. He pointed, asking permission to try them on.

A million things went through my mind, starting with shame — my feet were too big. A glint was in his eye, nothing in this world or the next was going to stop him.

He sat down on my low modular couch, took off his jacket, loosened his tie, rolled up his sleeves and pants, tossed off his shoes, and slid that famous right foot in. It fit. Our feet were the same size. He beamed like a kid with a new toy.

I saw the writing on the wall as he hurriedly laced up the left. He was going to break a million-dollar leg, and I'd be responsible. I took up the Persian throw rugs and played "Fame" while Pelé grabbed the solid pine hutch to get his bearings and started to skate around my 15-by-25-foot living room. I showed him how to stop — skate pigeon-toed, use the yellow stopper in an emergency. And how to bounce to keep the beat.

Fifteen minutes later, Pelé, in motion and in heaven, had mastered it, a natural. He checked his Rolex, shrugged his shoulders, sorry, we had reservations. He helped me with my glam white Tibetan lamb jacket.

We rode the elevator down to the lobby. A line of fans snaked out the door onto 76th, right to the corner of Lexington, around to D'Agostino's. Eddie had spread the word; they'd waited while Pelé skated. He obliged and signed autographs, gracious.

Eddie opened the door of a white stretch limo parked in the no-parking zone, and inside was Mickey, the P.R. guy, to promote Pelé's soon-to-be-released film, "Victory," with Sly Stallone and Michael Caine.

We left planet Manhattan, drove across the Brooklyn Bridge, curled back around to the River Cafe, where more fans and paparazzi had gathered. Pelé gave out more autographs, posed for press pics in front of a "Victory" poster showing him just behind Stallone and Caine in a V formation. Buzzy O'Keeffe, the restaurant's owner, escorted us and Mickey into his magical kingdom on a barge under the bridge, to a window table people killed for.

We looked out on the view-of-all-views, to the picture-postcard twinkling lights of the Manhattan skyline. In the limelight people stared, pretending not to, the whole room's eyes on us — on him. I was with a living legend, could feel the heat, but wondered why I didn't feel hot in this most romantic spot. Probably because I'd never seen him play. And three's a crowd.

We spoke Spanish, his heavily Portuguese-accented, difficult to understand, the conversation halting, plus he never asked anything about me. A super-private man. All I found out was his full name, Edson Arantes do Nascimento, and sparse details about his life — he had a house in the Hamptons, a wife. And kids. A deal breaker.

Then, boom, I got it. I was arm candy. I could stop sweating for Mrs. Pelé, the gawkers, our awkward connection, and enjoy the show, bask in the glow of a folk hero.

They dropped me off at midnight. No kiss goodnight, too crowded. A sport, a gent, he said he'd call again. (He did.) My claim to fame: I'd shown him roller disco dancing. Safe to say, I got a kick out of Pelé. The GOAT.

The fate of the skates? A series of closets. They're in storage now. I know exactly where they are. Just in case. Que me digas? What say, Pelé?

Susan Israelson lives in East Hampton and Palm Beach. It was reported on Nov. 30 that Pelé, 82, has been hospitalized for cancer treatment.