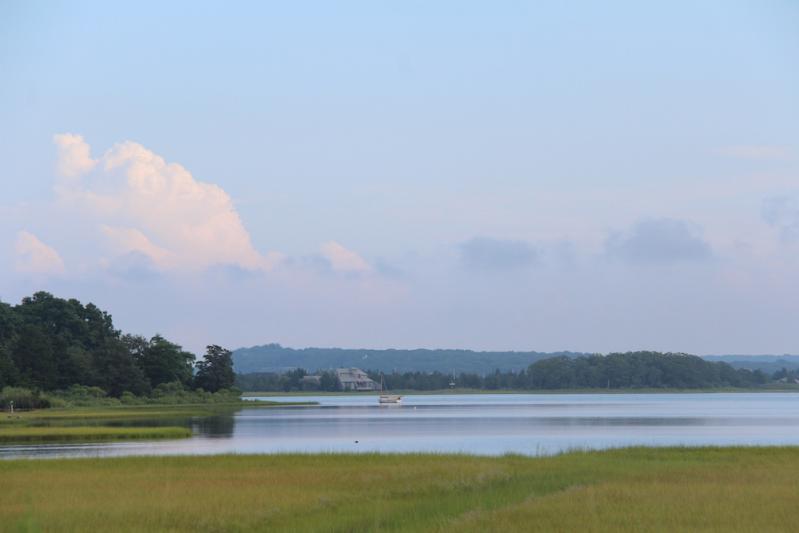 Every March fills me with a false hope that spring is right around the corner. The inevitable rebirth of the new season is always painfully incremental. Glacial. The coldest winter I ever spent was a spring in Springs.

Friends emerge for hikes in the woods. Locals know the best destinations. Who knew there were so many wonderful trails? I tell anyone who will listen that this is really a forest town that happens to be on the ocean.

April brings to me the realization that Springs is just an island surrounded by the Atlantic. The cold ocean temperature stunts the change in season. It feels as if it is plotting against us and will only reluctantly allow the Bonackers the respite they all long for.

A trip “UpIsland” is infuriating as every mile you drive west you can see the advancement of the foliage. It seems unfair. Upon return it is like a descent into darkness.

One morning you are suddenly, shockingly overwhelmed by the sound of birds. It is both wonderful and annoying at the same time. For two, maybe three months it has been silent, nary a leaf blower to be heard. Human activity has ebbed to such an extent that the turkeys and deer seem emboldened.

Will Louse Point ever be green again? I worry.

In May, the rush to summer begins in earnest. Backbreaking chores and trips to the dump are expedited to maximize future beach time. Someday . . .

Is it safe to plant in the garden yet?

It is shoulder to shoulder every night at Gerard Drive. Always shocking to see the size of some of the blues.

The trade parade has reached its crescendo. It takes at least an extra two minutes to get into town. Maddening for some, I suppose.

What should be a joyous month -ñ June — is often beguiling. It feels like skullduggery is afoot every time we have a night in the 40s or a cold rain reminiscent of the recent winter. We all seem to live for that rare confluence of a weekend day at big house when it is sunny and warm with a pleasant onshore breeze. Oh, these days exist, but are often intermixed in the dreaded workweek.

Is school over yet?

The rhythm of summer is upon us in July. The slightly evil tinkling music of the ice cream trucks is no longer unexpected. Those in the know bring back boxes of ice pops to the beach to be greedily consumed.

I marvel at how the ocean is the common ground that binds our children together. Never an angry word. Brown clouds of menhaden begin to make the sea boil. What was that shadow in the water?

In August the lifeguards are all golden brown with silly colored globs of zinc on their lips. They strike me as lazy as they lounge around the tower. Eating. Discussing where the bonfire will be that evening. A moveable feast of beauty, athleticism, and confidence. Don’t misjudge them. They are all adrenaline junkies with a wonderful purpose. They can go from a late-night-induced torpor on the sand to a full sprint and graceful porpoising at the sound of a whistle. The Hampton Lifeguard Association has trained hundreds of these “lifeguards for life” who have made thousands of saves. Hats off to them all.

Whales have become almost commonplace. The ocean is alive. Strange new and imaginative beach games are created. Watching my son fishing off his surfboard never ceases to amaze me.

Bonfires at night remind me of signal fires along the Great Wall of China, stretching out as far as the horizon, it seems. The Germans never had a chance.

September is both sadness and a relief. Those in the know, know that this is the month we have all been waiting for. Carolina blue skies, often cloudless. The humidity is gone. The crowds have dwindled so much that it almost seems like a present for tolerating the bad behavior of August drivers. Tradesmen seem relaxed and confident after another busy season. It’s never goodbye, it’s see you soon.

October is my favorite. The colors are intense and the air is crystal clear. As long as it doesn’t storm, it feels like autumn could go on forever. Alas, there is always that spoiler rainfall that progresses the inevitable. Defoliation is nearly complete. Favorite bars begin to close. Saturday nights belong to the fire pits.

The greedy laughter of the trick-or-treaters. Whoever heard of a thing called booing?

November: I am always reminded of a Tim Burton movie. Colorless except for shades of brown. A few lingering leaves on the trees are an insult during the day, spooky as they rattle at night. The crunch they make underfoot of the animals. Industrious squirrels can’t seem to keep enough acorns off my yard.

Peculiar old Thanksgiving traditions an outsider would never even think of. Scallops and venison?

By the first of December, everyone has their Christmas decorations out. It must be a sight to pass over the East End of Long Island in the space station! Hot tubbing and wine are de rigueur.

The first cold day in December is always the worst to me. I am never ready for it. I miss my flip-flops. I wait too long to put away the things in the yard.

This year the ever-thoughtful Santa Claus created an impromptu parade in Springs, hurtling down our quiet street with an elaborate light show on the back of a large pickup truck, blasting holiday music and collecting gifts for the needy. What will his elves think of next?

By January I acquiesce. I hunker down. Embrace the sedentary lifestyle. Making dinner becomes a challenge. There is suddenly time to watch five YouTube videos on how to make a proper shepherd’s pie or Thai curry.

A dozen teenagers just snuck into my basement to “study” and “hang out” and discuss global issues . . . yeah, right. They are certain that they are far more clever than we ever were. The circle of life.

The old town by Hook Pond is one of the most beautiful villages I have ever seen. The history envelops you. Every town should have a 400-year-old windmill adorned with Christmas lights! Too bad. Just for us.

February brings an inevitable polar vortex. The snow is so incredibly beautiful, and it breaks the sad monotony of brown. Did we get enough this year? Will it suppress the spring bug invasion?

Everyone we know who lives in one of America’s most famous and beautiful beach towns goes away on holiday. To a beach. Apparently, they can’t get enough. At least the locals are consistent.

Michael Petersohn and his wife, Caryl, met in Springs in 1999. They moved there full time in March of 2020.