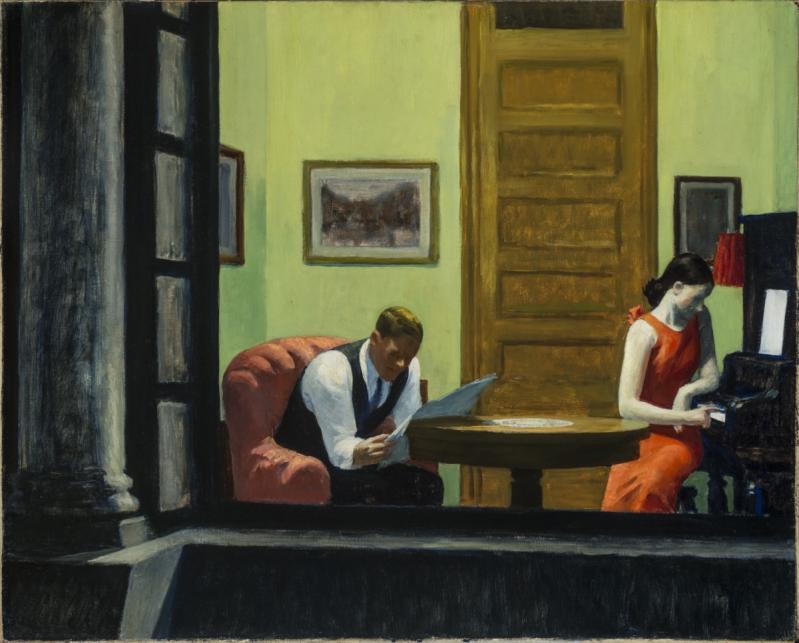 I had held out as long as I could, but, sure enough, stretched a surgical mask across my jaws before entering the Whitney for its Edward Hopper show. And it wasn’t even required.

The maskless were the clear, perhaps foolish, minority, because, you know, the city, the proximity, the exhalations in a packed elevator up into the galleries, the hordes paradoxically drawn by a show of a master of a peculiarly American kind of loneliness, even without “Nighthawks,” which has such a crowd-bending gravitational pull it cannot leave its home at the Art Institute of Chicago.

You could easily spend half a day there. Even the wall text was good, notable for its clarity and lack of artspeak. And as you wander through a room of Hopper’s late works you might find yourself at a huge wall of glass looking down on the dead end, or starting point, of the High Line.

The view is fitting. As the curators point out, any number of Hopper’s paintings seem to offer a look into an apartment or office from a passing elevated train. Leaving the museum, we walked the High Line, my family and I, taking in views similar to the artist’s — bird’s-eye or at least treetop. But sadly colorless, unlike his, what with all the drawn curtains and tinted glass. At best a fiddle leaf fig plant in a window giving on to a dim interior.

“Edward Hopper’s New York” is the title of the Whitney show, and it’s evocative enough of a lost city that it’s bound to call up your own associations. For me, speaking of empty spaces and onetime commercial illustrators fond of fedoras, that would be my grandfather on my mother’s side, one Robert Lindgren, who would on occasion leave his Midtown, midcentury office after hours and walk across the park, he told me once. Bryant? Central? The point is, he never saw a soul.

I tend to think of him on Monday nights like this one, when I’m writing, because he’d do roughly the same later in his career, working at home — start in at the drawing board after dinner, set himself up with a bowl of pretzels and a beer, a late-night talk show on a small black-and-white TV. Solitary work. It sounded ideal, in a World War II generation kind of way.

As Hopper reminds you, those were different times.