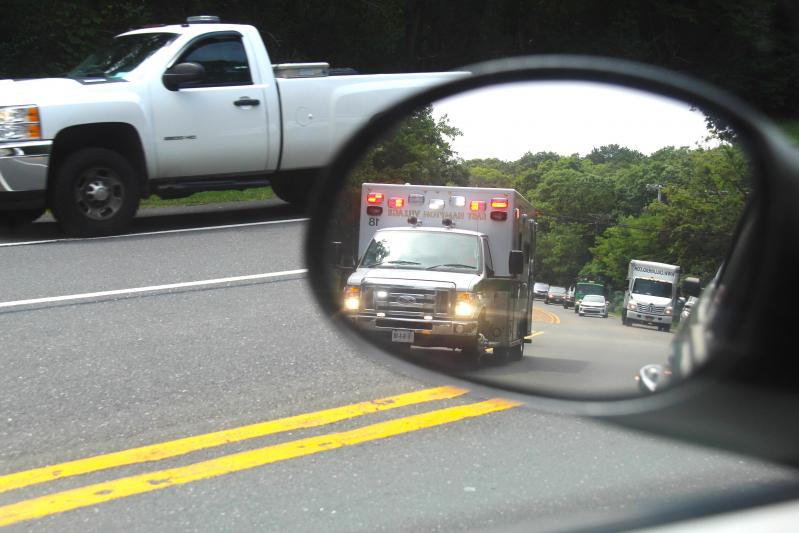 I was a wide-eyed greenhorn assigned to a night squad of world-weary veterans when I first joined the East Hampton Village Ambulance Association about five years ago. They were old hands who had sprung from the warmth of their beds (or, depending on the state of lumbar health and arthritis, creaked and crept from their beds) to respond to medical emergencies, bee stings, kitchen knife mishaps, and frightful car accidents in all weathers and at all hours, for 20 or 30 years or more, and they carried with them the old ways.

They still called our headquarters “the barn,” a holdover from the days when the ambulance bay was a barnlike structure, back before 1 Cedar Street was built. Their on-duty uniform was often irregular. Sometimes someone would arrive to a late-night 911 call wearing crocs and pajama pants, with a more official-looking hoodie or jacket on top, emblazoned with the medical caduceus.

My squad could tell tales of the days before the advent of the hydraulic stretcher, when the crew had to heft a patient into the back of the rig with sheer muscle alone; they remembered using manual defibrillation paddles and smearing the patient’s chest with conductive jelly during a cardiac arrest. They had been trained in the days before professionals — paramedics — were paid by the municipality to supplement the work of the intrepid volunteers. To be a member of a South Fork ambulance corps, until recent years, meant going it alone on the long drive to Southampton Hospital.

These days, the ambulance services here remain primarily volunteer, but we are aided by shifts of paid professionals — and this is a good thing. Paramedics are certified to establish intravenous access and to administer certain narcotics. They have more tools and training than a basic E.M.T. does, which means they can save more lives and, on occasion, alleviate the pain of a trauma patient before the rig reaches the emergency room. Most of these paid paramedics live UpIsland. They endure the trade parade traffic, driving into town for long day or night shifts. Most of them are itinerant, working at various departments up and down Long Island.

Every volunteer E.M.T. I know is grateful to have the help of professionals. They don’t always ride with us, unless a call gets particularly hairy. But while professionalism has its obvious virtues — and here I am at last getting to my point — it isn’t the only be-all and end-all. Here, I’d like to say a few words in defense of the nonprofessional and in praise of the volunteer in his metaphorical pajama pants.

If you are wondering why I’m talking about this somewhat esoteric topic, it’s apropos of the power struggle playing out right now between the E.H.V.A.A. and Village Hall. It’s a bit of a drama.

A fellow E.M.T. wrote an excellent letter to the editor of The Star last week in which she pointed out one of the major — but perhaps less-obvious — benefits of having large numbers of amateurs trained in emergency medicine. Aren’t you glad, she wrote, that dozens and dozens of current and former ambulance volunteers live here among us, in our neighborhoods? We’re all trained in cardiopulmonary resuscitation, and we don’t live in Smithtown.

I’m still not what you could call a veteran, being only five years in and not responding to nearly as many calls per year as some of our more devoted E.M.T.s, but I have made a few observations about the culture of first response and best practices when it comes to patient care. In my opinion, it is actually a positive medical good for the patient when a neighbor or someone recognizable from the supermarket walks through the front door during a crisis (in contrast with the highly professional but occasionally SWAT-team-esque arrival of police and paramedics in full battle rattle). When a patient is in pain, sick, scared, and stressed, being attended to by a friendly face — a familiar presence dressed in, say, a fleece E.M.S. jacket and knit cap — can help de-escalate the tension and lower the blood pressure.

America is enduring an era of civilian militarization. There is no specific, officially distributed uniform for paramedics here in Suffolk County, but the norm has become tactical gear: black or navy pants and matching shirts with many pockets and loops to hold radios, rather like the uniforms worn by police. I’d like someone at a university somewhere to study how vital-sign response varies depending on the attire of the responder. This may sound ridiculous or petty, but I am convinced it’s true. Anecdotally, it’s true.

If your eyes are glazing over, I am giving you a rhetorical poke between the ribs, right here, to wake you up: The survival of volunteer culture also has tax-dollar implications.

The volunteer service is the best financial bargain any community could hope for. In 2022, E.H.V.A.A. responded to around 1,400 ambulance calls. That’s 1,400 ambulance calls (!) within the village, as well as in the territory in Northwest Woods and in areas of East Hampton Town that fall in the cracks between village and Springs, Sag Harbor, and Bridgehampton. The vast, vast majority of those 1,400 calls were powered by volunteers.

It costs you — resident or tourist, insured or uninsured — exactly nothing to be aided and transported by ambulance here on the South Fork. It’s free. Volunteers make that possible.

Free ambulance service is universal ambulance service, available to everyone in the community, regardless of wealth or poverty. Most Americans live with low-level anxiety about unexpected medical bills. How many East Enders would hesitate to dial 911 if we knew a big, fat bill for the ambulance ride would follow in the mail? Certainly, the poor would. Certainly, the diminishing middle class would, too. People die because they are afraid of ambulance bills. That’s a fact.

From Riverhead to East Hampton, municipalities are tinkering with the idea of charging for ambulance service as a way of offsetting the cost of running one. E.H.V.A.A. is not part of the municipality, but an independent agency, and we’ve discussed and rejected that idea, absolutely and unilaterally, many times over. It’s not in the patients’ best interest or in the taxpayers’.

Charging per ride might, on the face of it, seem like a nifty revenue stream for a municipality, but it ain’t necessarily so. The cost of administering the billing and dealing with the insurance companies needs to be factored in. Pay-per-ride means budgeting for a paid administrative staff in addition to all the paid first responders who would be required to replace the dozen of volunteers who now carry the load. (Volunteer service would not survive a shift to pay-per-ride. Think about it. Would you volunteer to race to a stranger’s sickbed at 2 a.m. if you knew an insurance company was taking a large chunk of the profits? No, you would not.)

This is more than a question of culture wars; it’s a matter of ethics, of community values. Who are we?

Fifty years ago, it was the norm for a family man to moonlight as a volunteer firefighter or to be trained in lifeboat rescue, but society has splintered. Technology has torn us asunder. First came televisions, and we the people stopped attending bowling-league games and fire department trainings. Then came the internet, and we left the living-room television and retreated further, burrowing under our Overstock.com duvets alone in the glow of our iPads. Neighborhoods and streets that once buzzed with life year round went dark, went quiet, as real estate values chased out year-rounders and family homes became thrice-a-year weekend retreats.

Now, local fire departments and E.M.S. services have to advertise with billboards by the roadsides, pleading for new recruits. Once East Hampton was a tight-knit community, and once Americans habitually pitched in to help neighbors with their actual labor. But our friends and neighbors don’t volunteer in the numbers they used to. This is a problem all over the country.

For those who know — we few, we happy few — volunteering still adds meaning to life. It is a pain in the ass (excuse my French), but it adds joy. Do you really need more Netflix? Try it some time.