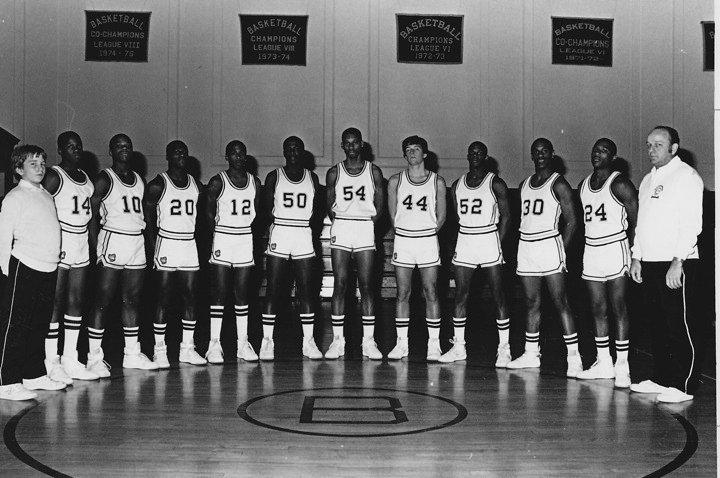 The 1984-85 Bridgehampton High School basketball team, coached by John Niles, far right. On the left, number 10, Troy Bowe, went on to star at the University of Hawaii. Your friendly neighborhood columnist is number 44, and to the right of him, number 52, is Julian Johnson, who still owes him 40 bucks.
Bridgehampton School District
By Baylis Greene

Some unsolicited advice for the Bridgies, I mean Bees: When falling behind early in the fourth quarter, don’t panic and start chucking up shots from beyond the 3-point arc. The hole you think you’re in is shallower than it seems, so drive to the hoop instead.

Good things will happen. Just look at Dom Mancino on the opposing team, the Whalers, in that same quarter Friday night. Will Martin before him was great at it.

It was a close game for a while there, at times exciting, but someone near me in the stands said it just wasn’t the same. Not like the old days. The rivalry. The intensity. The fans.

I’d say the effort was there, as it always is in the barely controlled chaos that is high school hoops. But it is true that those mid-1980s Bridgehampton teams were different, to put it mildly. Ridiculously good, for such a tiny school. You might even say mannish. At point guard, Rodney Harris and later Troy Bowe would bull to the hoop like fullbacks. Julian Johnson, under 6 feet, could dunk. And he wasn’t alone.

I was there, and so let me add here that I would not include myself in that glowing assessment. I was happy to be a benchwarmer, or as I like to say, a practice player, because you’ve got to be able to contribute something simply to keep the scrimmages going.

A misfit, maybe that’s the word, and as such I got along with most everybody — more comic relief than anything else.

My junior year, for example, 1983-84, I played J.V. with a younger Troy Bowe, and at the end of the season we were both put on varsity in time for the trip up to Glens Falls on the way to a state Class D title. But what I remember most clearly is laughing hysterically as we walked through a Burger King drive-through late the night before the game, waited on by some goofy local kid named P.J. Sweet.

It wasn’t until Friday that I finally saw someone from the old days at a game — Michael Feaster. Makes sense; he has two kids on the team. Now that I think about it, I believe it was Troy who gave him his high school nickname, a good one, “Fester.”

Hey, no offense, man. It was all in good fun.