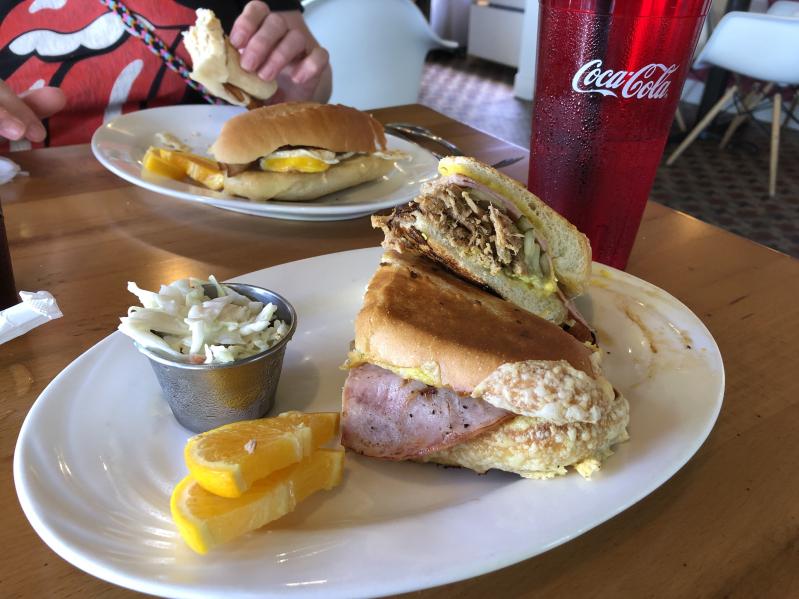 Sweet Christmas, was that ever a sandwich. Now, that may not exactly be a momentous statement, but as we’re all together here on the East End for the time being, it’s worth noting that the best sandwich this side of a Philly cheesesteak in situ (with Cheez Whiz, that is) is waiting for you at this newish place in Riverhead, LuchaCubano.

The Cubano, a storied mouthful. Cured ham piled with shredded pork — yes, I believe that’s from the same tasty, intelligent animal, so I’ll have to pray thanks to one soon — shot through with pickles and smeared with spicy mustard. All on bread that was, I don’t know, tubular? And Cuban? Toasted with a layer of swiss melted on, it was hard to beat.

This was in an old diner sited perpendicular to Main Street, windows open, stainless steel shining, central exposed kitchen sizzling, freshened up with some bright colors of Miami.

Only a few doors down, I once had an awfully memorable marinated steak sandwich at Cliff’s Rendezvous, dished out by an efficient old pro of the waitressing game; she was the best I’ve encountered since that time I lingered alone over a meal amid all the lush, blood-red upholstery at L.A.’s late, lamented Hamburger Hamlet. Maybe you know what I mean.

But the point: To those of us east of the canal, Riverhead can seem like an undiscovered country, food-wise. I always thought The Star should review that weird restaurant down a flight of steps at a converted residence perched above the Peconic River, not the most pristine waterway, but the modest wildlife there does gamely hang on, doesn’t it?

Failing that, taking Old Montauk Highway to Riverhead, which I once heard a Springs sculptor call “Riverdread,” as if the D.M.V. were all there was to it, and yet it rebounds, what about Cantina Latina? Despite its presence on a desolate stretch in the no-man’s-land of Shinnecock Hills, there are always cars there. It’s gotta be good.

LuchaCubano, though, is owned by the same people who brought you Lucharitos in Greenport, highly recommended for the shrimp tacos and margaritas, and an establishment ripe for Sag Harbor residency. The old Whaler Burger spot on the turnpike seems to be taken, but a guy can dream.