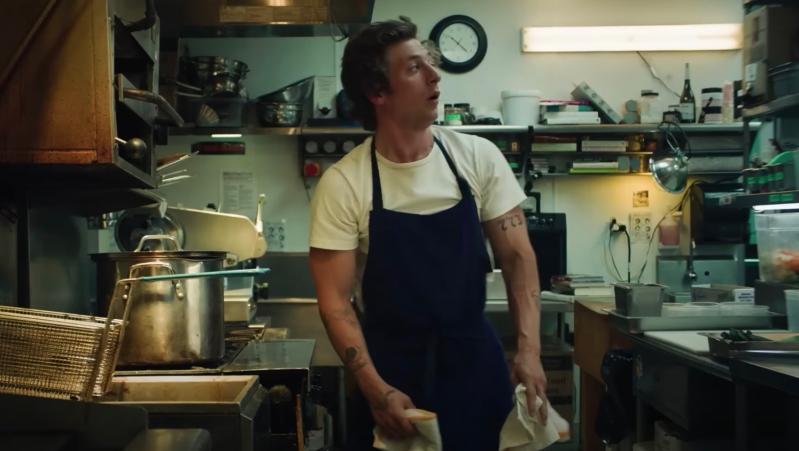 A screen shot from the trailer for “The Bear,” with Jeremy Allen White as Carmen Berzatto.
FX / Hulu via YouTube
By Baylis Greene

I hesitate to say anything, as the show’s already got a ton of press, but still, it just might be the case that every working stiff in the country should see Christopher Storer’s restaurant drama “The Bear” on Hulu.

Frenetic, check. Foul-mouthed, check. Rough around the edges, Chicago-style, with no shortage of establishing shots of the rumbling El, for you fans of the rails out there, check. The kind of soundtrack that sends you scrambling for notepad and pen, what with Van Morrison’s soulful “St. Dominic’s Preview” and Radiohead’s airy “Let Down” in the mix, check again.

You can add to that list an intelligent treatment of two of the more persistent scourges of American life, gentrification and drug addiction. Beef sandwich on the side.

So, I have a kid home from college and busting her hump as a server at a popular, high-end Hamptons eatery. It’s work that merits combat pay. As a wise Pierson High administrator once said to me, the benefits of that experience are incalculable. (She’s now on episode four.)

My middle child, going into his senior year in high school, the one I watched the entirety of “The Bear” with, got a taste of it last summer clearing tables and taking food orders at a club hereabouts, braving the combustible admixture of sun, alcohol, and the convenience of dumping all conspicuous consumption on a running tab.

My own experience at a waterfront East Hampton restaurant way back ran to, what’s that jerky co-worker saying? “Take that guy’s picture. You won’t be seeing his face again.” Lobster butter dumped on an expensive sleeve. Shoved aside by a waiter on a mission. Burned by buns exiting a red-hot oven.

Listen, I don’t want to sound like everything I see only reminds me of myself. But questions do arise. Is there any lasting value to a humiliating experience like that? Or just scar tissue. (Only once does any kitchen staffer quit in “The Bear.”) Seems like there are benefits only if you make it through. Hence the pride in my daughter. Fail, and at best the benefit is a dropout’s resolution to return to school.

The show makes you think, in other words. And not just about work, but, as the main character has inherited the business from his brother, about family. Family dynamics. Family disappointments. Lack of familial communication. Weird resentments and the problem of dodging them, letting them fester, or facing them, and how that almost never happens.

This is realism at its brutal best.

Mashashimuet Park's History and Future
A Conference for Young People to Create Solutions
Get Outside, Get Moving
END_OF_DOCUMENT_TOKEN_TO_BE_REPLACED