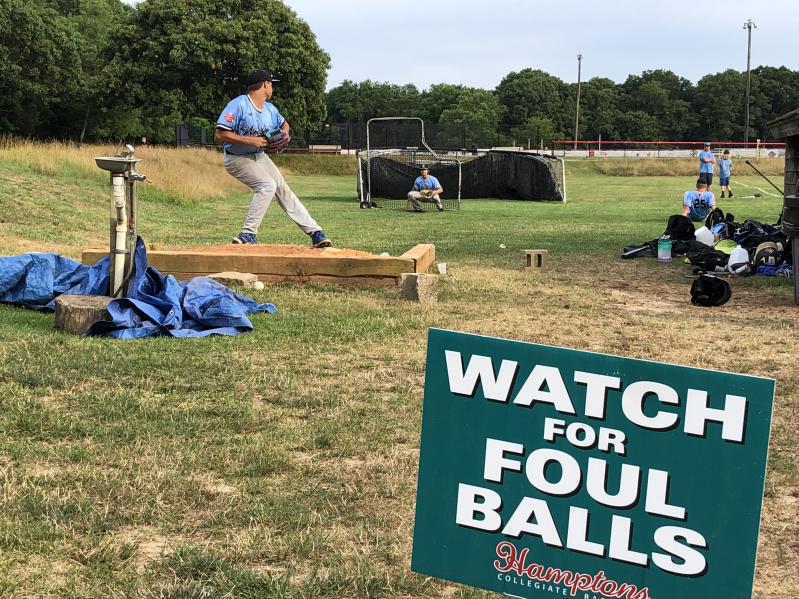 Foul balls crashing onto parked cars is a reliable sideshow at Mashashimuet Park. One took out a rear window Sunday, and laughter ensued when it was determined that the damage was to a white Range Rover with New Jersey plates.
Baylis Greene
By Baylis Greene

Can’t make it to the Mets? The slow death of a drive on the L.I.E. too tall an order? The 16-buck price tag a beer too far? I’m here to tell you a pleasant summertime afternoon is to be had for free with the Hamptons Collegiate Baseball League.

Consider: Mashashimuet Park, the sun is shining, the ospreys are circling, the grass is lushly green, the infield dirt is, uh, dirt. The crack of the wood bat. The fwap of cowhide on cowhide as spheroid hurled at velocity lands in padded handshaped receiving envelope. The banter and catcalls from the dugout area. (“Jesus!” a teammate shouted at a hit batsman from just outside the foul line Sunday, and it was funny, I’m not sure why.)

And consider, for that matter, the concessionaire (who in reality seemed to be more like the game’s “person in charge,” as they say in retail) peddling Gatorade and gear. Spying something on a customer he could not have otherwise missed — the bright yellow Marinos Italian Ices T-shirt sported by yours truly — he kindly recommended freezing red Gatorade for a treat that approximates the sweet dregs at the bottom of a Marinos cup.

Baseball skills? There were plenty on display. Take the reflexes of the Sag Harbor Whalers’ third baseman, one D.J. Perron Jr. of UMass-Dartmouth, who snagged a couple of smoked shots at the hot corner like a young Graig Nettles. Well, okay, so maybe he wasn’t stretched out horizontally a foot off the ground for the pick. Maybe “like a Triple-A’er” will do.

And drama. The Whalers were a strike away from winning the second game of a doubleheader against the Westhampton Aviators when a blast landed just out of the reach of the center fielder as he sprawled over the mesh outfield fence. It was as sudden as it was unexpected, and the four runs that scored were the ballgame.

This is late word, true. But there are still chances to catch games: The Whalers are at Westhampton Beach Thursday at 4:30, and Friday at Southampton High the Breakers host the Shelter Island Bucks (who, note to management, missed an opportunity in not featuring roadkill in the logo).

Playoffs? They’re coming, and they’re a crapshoot. As of Monday night, four teams had either 12 or 13 losses. In the N.F.L. that’s called parity. Here, somehow, it’s not so annoying.

Mashashimuet Park's History and Future
A Conference for Young People to Create Solutions
Get Outside, Get Moving
END_OF_DOCUMENT_TOKEN_TO_BE_REPLACED