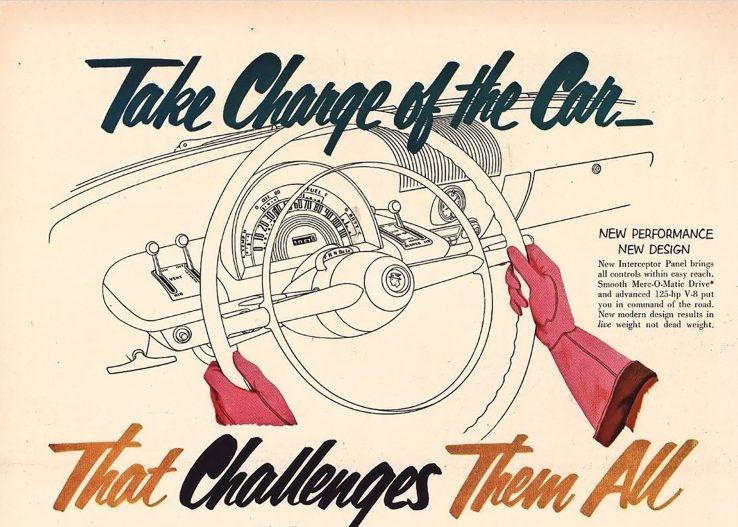 From an advertisement for the 1952 Mercury, featuring Merc-O-Matic Drive.
Ford Motor Company
By Baylis Greene

It’s time we all came around to the idea of self-driving cars. We’re almost there already, judging from the frequency with which drivers’ attention is riveted downward into phones in their laps or sidewise into alluring screens gripped as they one-hand it through traffic. And in their distraction, sheer vehicular momentum carries them on their way.

Peer into passing windshields along dicey Noyac Road, for one example, and it’s clear that driving while screen-timing is all the rage. It’s hard to say, maybe one in five motorists? It’d be laughable but for the thousands of pounds of hurtling sheet metal and iron involved.

The other day, departing the Shelter Island Ferry after a jaunty ride across the rushing currents, the well-fenestrated waterfront houses on the bluff, the circling ospreys above, the inspiriting breezes, the trees throbbing in their greenery — even then? Presumably, Dude I Saw Driving With Head Down, you just had a pleasant interlude in which to check the fear-of-missing-out text, the life-altering email. Same goes for you, Other Guy Close Behind, at the wheel with iPhone erect in your palm like a raised middle finger.

If you’re like me, driver’s ed is the only thing you remember from high school. How to change a tire. The elements of defensive driving. How to road-spot a wheel to avoid potholes. Or, on the mid-1980s off-season backroads of Bridgehampton and Sagaponack, how to steer so as to flatten potatoes left behind by overfilled International Harvesters and thus earn points in a teacher-devised game.

Covid’s dismissal of these in-car classes was a real blow. The banter was memorable, too, particularly if your instructor was also your shop teacher — on the long tradition of driving drunk as a Suffolk County pastime. About how, roadside, “Those trees don’t move.” How the alcohol-happy Scandinavian countries solved their D.W.I. problems by way of draconian punishments.

Which brings us back to texting while driving. As the social order continues to break down, maybe it would be a good idea if this one area were an exception. What’s needed? Deterrence. Something this side of Hammurabi’s code, but something with more teeth than another earnest if well-produced public service announcement.

As for self-steering cars, I see two obstacles. First, that GMC Sierra pickup commercial that touts the resulting freedom to clap like children along to Queen’s “We Will Rock You.” Hamboning in your front seat, essentially. There must be more to it.

Second, the fact that many of us never got over a jones for a clutch and a stick shift. Responsiveness. Control. Right hand too busy to pick up a phone. Those were the days.