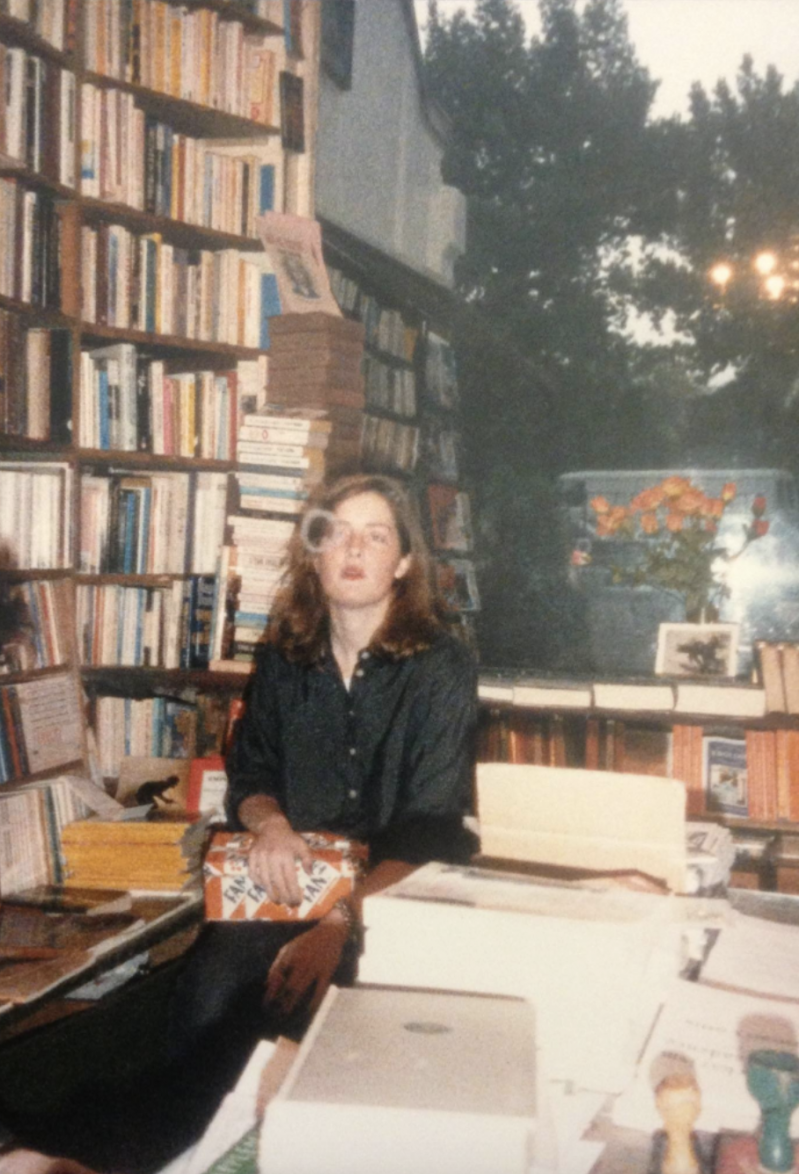 The author blowing smoke rings in the front shop of the bookstore Shakespeare and Company, on the Left Bank, c. 1986. Adrian Curry photograph.
By Bess Rattray

Smoking was an outdoor pursuit when I learned how, at the age of 15. We smoked in and around a pavilion — a gazebo of sorts — known as “the Pav,” in the middle of the prep-school campus quad at Concord Academy in Massachusetts. We gossiped about the creepy peccadilloes of dormitory “house parents,” we cried over bad exams and bad boys, we bragged and swaggered, we quoted Joyce and Joy Division, we rolled our eyes and told lies, we wore huge vintage tweed overcoats from the Salvation Army as we loitered at the Pav and smoked.

The Pav was the social epicenter of boarding school for the class of 1984. A boarder from Seoul stood on the step of the Pav and taught us a nursery song called “Santoki,” about a Korean bunny rabbit; I still remember the lyrics. We lolled on the Pav’s benches, smoking while reclining like teenage odalisques; we made out after the sun went down. I learned to blow smoke rings, shivering at the Pav, while wrapped in a woolen blanket because there was no such thing as a cool winter coat, according to me, in the snowy New England winter of 1983.

You could also smoke indoors when I got to boarding school — in the basement of the main academic building and in the common rooms of the dorms, with their tasteful floral wallpaper, if you can believe it — but smoking was much more pleasurable outdoors.

I haven’t had a cigarette for more than 20 years, and, oddly, haven’t even wanted one. But, even today, I am transported to happy days of youth when I smell tobacco wafting on the breeze. Honeysuckle, lilac, Coppertone, and secondhand smoke: These are a few of my favorite things. I sidle up to strangers at parties when they strike a match, just for nostalgic proximity.

The health police and parenting patrol will be disgusted with this week’s column — here come the letters to the editor! — as will my own children, who are appropriately revolted by cigarettes. But I grow old, I grow old, and wear the cuffs of my trousers rolled . . . and so, in the antiquated spirit of saying things it is verboten to say, I am going to come right out and declare that I did love smoking when I was young. I was a champion smoker. I could not just puff out perfect smoke rings, but could send a second ring through the first ring, as it floated away from me and rose in the still air. I smoked my way through Alphabet City, Budapest, and the Left Bank.

I smoked a lot. From the age of 15 to 33 — a pack a day, nearly, in my 20s and early 30s — and made it all the way up to the new millennium before I quit. One summer evening in 2001 or 2002, when I was living in Brooklyn, I decided I no longer liked cigarettes and I threw my last pack of Marlboros out the window onto the sidewalk below. (Actually out the window. I lived only one flight up.) I don’t know why I was capable of this cold turkey, but I have never been tempted to have another.

When you go to the movies these days, you are treated to the spectacle of youthful actors in period dramas failing in their attempts to pretend to smoke. They don’t understand that the point of smoking was to regulate the smoke, to direct it this way and that: with a soft “pop” sound of the lips, pulling the smoke into the chamber of your mouth before inhaling it farther into your lungs, controlling the exhale with not just your lips but a constriction and release of the throat. Most movie actors these days can’t do it. Instead of directing the exhalation out of their lungs with firm formation of the lips, they let their jaw hang slack and breathe out normally, so the smoke just falls from their mouth. They don’t know how to hold the cigarette nonchalantly, either. They wave a stiff hand in the direction of the camera, like the hand itself was a prop, a burning cigarette wedged unnaturally between the knuckle of the index and middle fingers.

Hollywood still uses tobacco as a cheat to create a period atmosphere, but — if, like me, you are old and misspent your youth — you can tell which actors are real smokers and which are fake. Angelina Jolie in “Girl Interrupted”? Yes, hard-core smoker. January Jones in “Mad Men”? No. Anya Taylor-Joy in “The Queen’s Gambit,” no. Michelle Pfeiffer in “Scarface,” yes. Lauren Bacall, of course. Bacall was the greatest cinematic smoker of all time, alongside Robert Mitchum.

My first brand of choice, when I bought cigarettes at the Tuck Shop on Main Street in Concord, Mass., was Lucky Strike, strictly because of the iconic retro look of the bull’s-eye packaging. My punk-rock classmate Marcus Kuhn rolled a pack of Luckys into the short white sleeve of his T-shirt, rockabilly-style. I never had any brand loyalty, though. At times I smoked Sobranies (ridiculous, slim “luxury” cigarettes that came in a Pantone wheel of colors), Hungarian Helikons and cheap Symphonias, Camels — both filtered and unfiltered — as well as Marlboro Lights and Marlboro “reds,” the cowboy-ad Marlboro-man kind, which were the most primordially basic brand of cigarette during my decades of addiction and certainly the most straight-up rock and roll.

Recreations of the past in museums and “historic villages” always fail to capture the smells. The atmosphere of a time and place can be captured partially with period-appropriate lighting — flickering gaslight in dim hallways, or beeswax tapers on a card table set for bezique — but have you ever been to a museum that smelled of the past? No. That’s a mistake made by curators. It’s not an incidental part of our experience of life, the aromas around us.

One time in the mid-1990s, I spent a crazy weekend in the small Transylvanian city of Kolozsvar (called Cluj in Romanian) and went almost giddy with the sensation of time travel brought on by the smell of coal smoke in the air as we hurried through pitch-black streets — no streetlights — to the open door of a warm apartment where friends of friends were drinking palinka pear brandy. Anyone running a museum or historic recreation set at any point in the 20th century should pipe in the tobacco smoke.

Everything absolutely reeked of cigarettes for most of the last century. The crowd in the pews at American churches smelled of tobacco, smoke in the folds of worshipers’ jackets and in their hair. Men and women in nightclubs stubbed out their cigarettes and kissed, mouths full of tobacco breath. Restaurants were hazy with smoke that hung over the red-checkered cloths and chianti bottles. Lawyers smoking in courtrooms, doctors smoking in surgical offices; patrons smoking in cinemas. They smoked in living rooms, in bedrooms, at the beach.

Do you have a light? Avez-vous du feu? Gyufad van? It was the second instruction in tourists’ foreign-language phrase books, after “Where is the bathroom?”

What was smoking for? This is the unanswerable question. My children don’t see the point. There wasn’t a point. It’s hard to explain. It was soothing, somehow, in moments of anxiety, but mostly it was about the motions — hands, fingers, snap of the lighter, lips, mouth. Maybe it’s how we all treated undiagnosed O.C.D. back in those days. I have zero desire to smoke now and don’t want you to, either, but for some reason, a pernicious romance around the memory lingers. I miss the days of smoking as Apollo astronauts must miss their hours of flight, or an aging Hapsburg princess would have longed for the waltzes of youth.