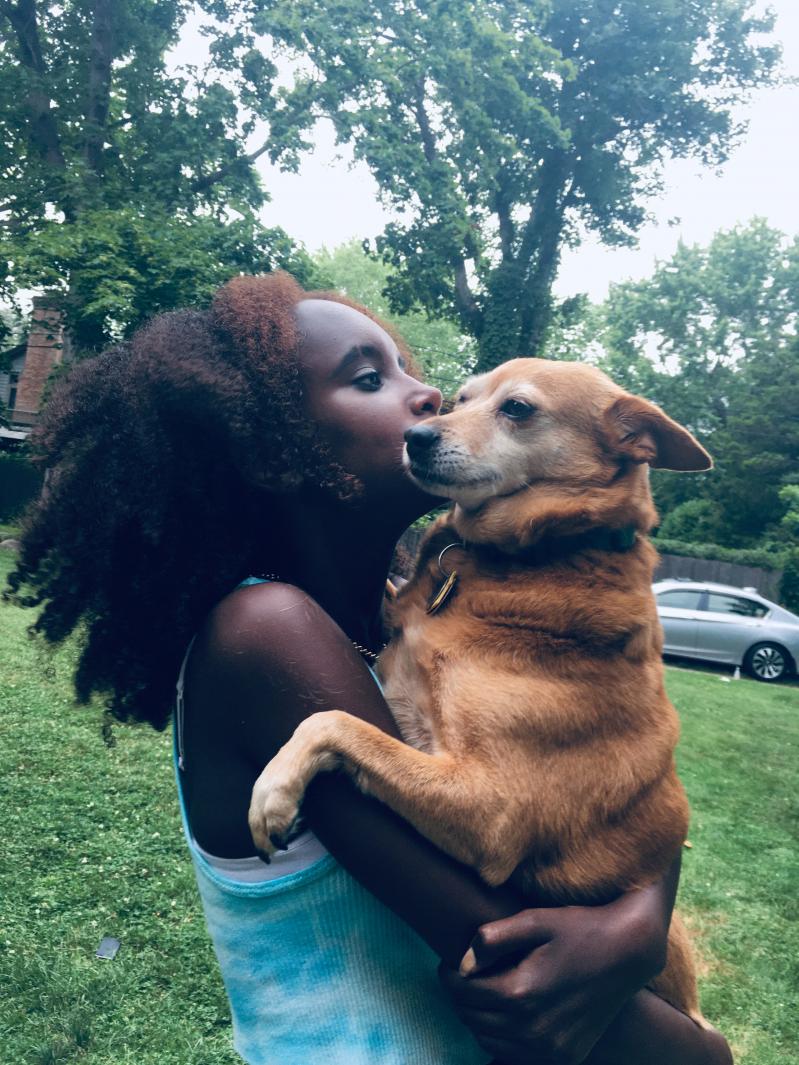 My mother, who wrote a column called “Connections” in this space for more than 40 years, has only made one remark on “The Shipwreck Rose” since I began my own column last July: “I see you are styling the dog’s name as one word, Sweetpea,” she says, with the sideways gaze and slightly arched eyebrows of a disdainful veteran copy editor, “rather than two.”

My dog — Sweet Pea to my mother — came from ARF and was supposed to be hers. My kids and I picked her out at the Animal Rescue Fund of the Hamptons in November of 2017, a year and a half before my mom and her husband, Chris, moved to Peconic Landing in Greenport. They had been announcing for ages that what they needed was a dog, and had recently had a fence built around the back garden to keep one in. Nettie, Teddy, and I made several weekend visits to ARF’s kennel H.Q. in Wainscott to walk candidates in the woods before identifying just the right faithful friend for the grandparents.

Sweetpea had arrived in New York via chartered plane from Puerto Rico after one of the hurricanes. She is a storm evacuee. I have photographs of the day we met: My children and Sweetpea in various cheek-to-cheek poses on a couch at ARF, the dog skinnier than she is now, her eyes a bit alarmed. She clearly was someone’s beloved pet in her previous life: She came to us fully house-trained, and inclined to barge her way onto a lap, and she can do turns on her hind legs like a circus dog if you hold a treat in an outstretched arm.

Sweetpea would look good in a circus tutu and one of those circus-showgirl headdresses, a tiara with a plume, but her character is more hard-boiled than that. If I had to sum up her personality, I’d say she’s less showgirl and more like a short-statured lady detective. Intrepid and sly, a four-legged Miss Marple, or the feminine, Hispanophone incarnation of Hercule Poirot.

And, so, my kids and I came somewhat grudgingly into possession of a chubby little red dog who looks from behind like a fox who has been stealing too many chickens. She commands the center of my bed, and I don’t have the heart to make her stay in the living room, but instead have accepted the inconvenience to myself and my spine and cast upon her all the blame for the lower-back troubles that have bedeviled me through the pandemic and rob me nightly of my sleep. Sweetpea knows about my back, but she doesn’t care.

ARF had estimated that Sweetpea was between 5 and 7 years old, I believe, but I think that isn’t correct. Sweetpea has white whiskers on her chin, true — but you should see her go, when she’s running on the beach! She levitates in her pure joy at being in the proximity of seabirds, wind, and funky-smelling flotsam and jetsam. She’s a cannonball shooting toward me, her paws up and her ears back, when I whistle for her.

It took us a long time to come to love Sweetpea as she deserves to be loved, mainly because she has been — or used to be, on and off — a Bad Dog. Sweetpea has bitten my nephew Ellis — not hard, but still — twice (once for no apparent reason at all, on the living room couch, and the other time because, we think, he came within six feet of her dinner bowl). She has bitten Loulou, a fluffy Bichon-type dog belonging to Ellis and his sisters, when Loulou paid a cordial visit to our backyard. She has nipped the ankle of Russell Bennett, in the front office of The Star, and remains to this day an unwelcome office pet. Shunned! Canceled!

Sweetpea is actually a very fond and clever dog. She looks at me with intelligent eyes. All through the pandemic, she has been at my side. Gorilla-glued to my side. Sitting in my chair, standing directly underfoot when I am cooking at the stove. It took me ages to realize that she was intentionally doing this, standing exactly where she shouldn’t: She wasn’t being stupid, she was trying to get my attention by tripping me.

Sweetpea communicates clearly. When she wants her morning or evening meal, she locks eyes and makes a very specific “Tales From the Crypt” creaking sound that translates to “The menu, madam!” She is a Good Dog. Lockdown agrees with her. She has our attention. It’s been eight months since she bit or attempted to bite anyone. Ellis would disagree that Sweetpea could reasonably be called Good, but, I point out, she’s never once done anything dastardly in the house, in the dog-mess department. She comes instantly when called. She is a wonderful walking companion, and, other than always intentionally being in the way — which I suppose could be characterized as passive-aggressive — she never asks for anything or is any sort of bother.

I think Sweetpea may be miffed that I am writing about her. It is a Monday evening, and I am at the desk in my bedroom, and just this moment, she jolted upright from a snoozing position in the middle of my four-poster, dashed off of the bed, and decamped to the living room, ensconcing herself ostentatiously high atop the luxurious cornflower-blue dog-bed pillow she has previously scorned. I’m slightly worried, too, as I pen this update on an unexpectedly dear little companion, that a call will come from Greenport, requesting the delivery of a small, red, chubby fox-dog to a cottage on Egret Lane at Peconic Landing. No dice, ma, no dice.

Petition to Speed Up Sand Replenishment in Montauk
Artistic Portraits of M.L.K. Up for Auction on Saturday
Wine Tasting for Lions Club
END_OF_DOCUMENT_TOKEN_TO_BE_REPLACED