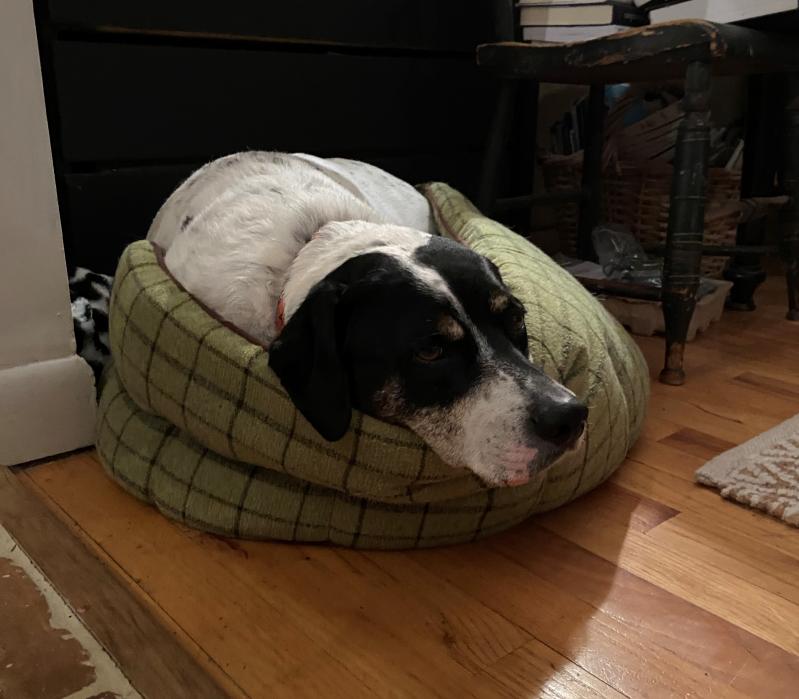 Duster, all tuckered out after another bout of barking at nothing much at all.
Penelope Greene
By Baylis Greene

What to do with a troubled dog? Or should that be trouble-ing? A family pet who isn’t much of a pet or all that family-friendly?

A teenage friend of my son’s stopped by on an errand of pandemic mercy the other day — dropping off some of his mom’s unbetterable homemade cookies — and got viciously barked at on the front porch for his troubles. I grabbed the collar in time, though I don’t think a bite was coming, but the hound seems to have it in for this nice kid, having nipped at him once before, an occurrence that in another time might’ve been curtains.

It was my fault. I could’ve prepared better. But I’ve been saying that my whole life. Maybe because this friend has his own dog with a screw loose, he was, for a second time, understanding to a fault.

I joke to him that “I’m your master, I own you!” but it falls on deaf, floppy brown ears. Hell, I’ve even been on the receiving end of silently bared fangs, once for simply trying to take a brush to a patch of fur, another time, not so silently, as I hooked our extend-a-leash onto his collar when he had already retired to bed — in fact, to my very spot, using my pillow — and was singularly disinclined toward a nighttime walk.

We’ve had this creature for going on seven years, and in the past I would’ve raged at such a betrayal, but instead I did the mature thing, turning on my heels and sleeping in a kid’s room for two months.

Just as it had been a Hobson’s choice when I dutifully went to meet him at the shelter and decide whether to take him home after the kids had already had a fun visit with him and said they loved him, similarly there is no recourse now; we’re stuck with him. Even his name, Duster, as he was dubbed by some Pennsylvania puppy mill attendant, doesn’t really apply. Scraps, I think, would better fit his personality and taste for human-food handouts.

In fairness, he has gotten better; he no longer stands atop the dining room table in anticipation of meal time. And there are still the health and sanity benefits of walking him, even if lately he’s been cutting those short in frequency and duration. He is handsome, I have to admit. And his expanding white midsection flecked with black spots acts as a comforting heat source on those wintry occasions he’ll allow anything like snuggling.

This is life. His life. A game-changer. We took the plunge and saved him. And for that, I’m glad.