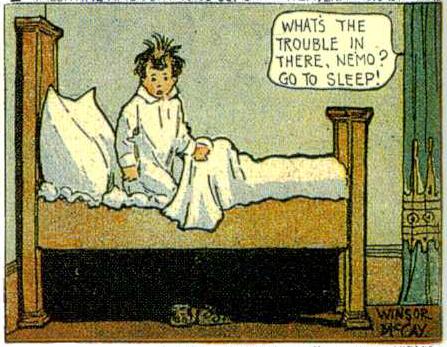 A panel from Winsor McCay’s comic strip “Little Nemo in Slumberland” from a 1906 issue of The New York Herald.
By Baylis Greene

It took a global pandemic lockdown for me to finally appreciate my father’s lifelong predilection for napping.

I can’t say I ever heard him utter “I’m just resting my eyes for a minute” by way of justification — I’ve come to like “Just stretching my back for a bit” myself — but in the 1970s and ’80s, happier, more restful times, to be sure, he would always claim that all he needed was 15 minutes to recharge his batteries, as it were, minutes when I suspected he was never really asleep at all, but half awake.

Sure enough, they say those short bursts of rest are better. Stay under for an hour, in other words, and you’ll only wake up tired, not refreshed.

But I’d like to take this opportunity to applaud whoever coined the phrase “falling asleep,” so apt for that tipping-over feeling as you plunge headlong into Slumberland, particularly when it comes to clandestine naps in the daylight hours. I’d assumed it was Shakespeare, uniquely attuned as he was to other realms. Yet I came across a 2015 discussion in a language-and-usage forum online in which the honor was laid at the feet of William Langland and his 14th-century “Piers Plowman.”

Daily would be an overindulgence. As in all things, moderation is called for. Fighting the nap, as a concept, as I used to do, is no longer called for. Not when there’s more time at home and much in the world to be avoided.

In the early 2000s I could be found working at the reference desk of the public library in Shirley, and, like clockwork, come 2, at the latest 3 in the afternoon, a siesta-hour exhaustion would land like a velvet hammerblow about my head and shoulders. Nature of the job, location of the job, whatever it was, it was solved with a move to The Star. But office life, back when we lived it, and advancing middle age will have their way with you, so in time the worker bee, computer-bound and struggling to so much as see straight during those circadian dips, will stagger outside for a dazed flight in search of a human or mechanical coffee dispenser.

Is it the change of scenery or the cuppa joe that’s enlivening? Doesn’t matter, it’s a caffeinated society. Or was.

When I was in college, I made up for being slow and methodical with assignments by pulling all-nighters, so many I lost count. I once sucked down cups of coffee — black so as to really get the chromosomes crackling — sufficient in number to stay up two nights in a row. What was interesting was how much easier the second night was. All you had to do was make it past 3 a.m. on the first night, and you could coast, semi-euphoric, to the finish line.

Who knows what I might have achieved if I hadn’t burned all those brain cells.