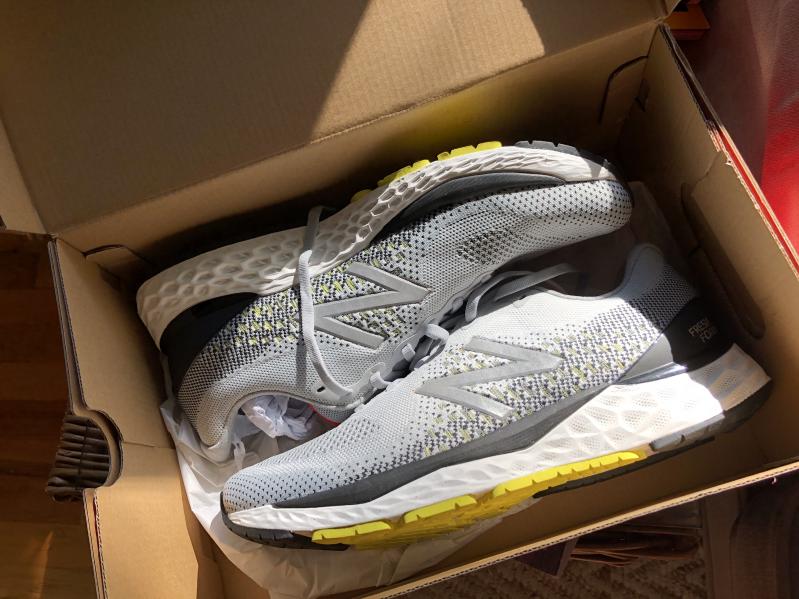 New, glorious new . . . New Balance, that is, long may they run.
Baylis Greene
By Baylis Greene

I finally broke down and moved on from something loyal, something tried and true, something comfortable and well worn, something I cared about.

My running shoes. I mean, it’s been years, guys, and you’re not getting any younger. You’ve been driven hard and put away smoking one too many times. What was once merely a crease where the toes bend has become a too-revealing hole. The nail of my big toe has cruelly rent your mesh face. A body part as dicey as an Achilles’ tendon has worn away the fabric and ankle cushioning astern.

Such was the pounding administered over what was more than half a decade of determined exercise that the thin layer of your rubberized sole peeled away beyond the point of even Krazy Glue’s reattachment. Although I may miss that flapping sound it gave off, keeping time as I ran, I will not miss your dull charcoal gray hue, an inappropriate dash of Ferrari red at the heel. You were, I’m sorry to say, ugly.

As for the newer model, not to get all Trumpy or anything, but I really did want the replacements to be made here in America — specifically at what I remember to be a New Balance factory where funky Allston, Mass., rises from the concrete wastes of the Boston University campus as you travel west along Commonwealth Avenue.

Yeah, there. Keep our people employed.

It wasn’t to be, however, as the sales guy at Gubbins Running Ahead informed me that the pair I was ogling, plastic “Made in the USA” tag prominent on the tongue, were mostly just for show. And upon closer inspection they were indeed appallingly heavy with suede. I was thus wiser, my wallet left fuller to the tune of 50 bucks.

“He was knowledgeable, that guy,” I said to my wife once I was back home. “You know, the one who sold us the tennis racket?”

“That was Geary Gubbins, fool,” came the reply. Or words to that effect.

Now I see. The former Southampton High standout. Went on to run at Duke. Great, I’m glad I was in such good hands.

It’s just that under this Covid regime, working from home, and living as I do out in rural Noyac, to say nothing of the vexing summer traffic that’s now worse than ever, East Hampton proper might as well be a world away. So, frankly, and no offense to the Chamber of Commerce or the latest iteration of Boutique Chic, but that one mom-and-pop shop is the only reason for me to venture into the village at all.

At least the pair I got there were still New Balance, a handsome light gray with accents of yellow, black, and white at the sole. Made in Vietnam, which is the next best thing, considering what we owe them.