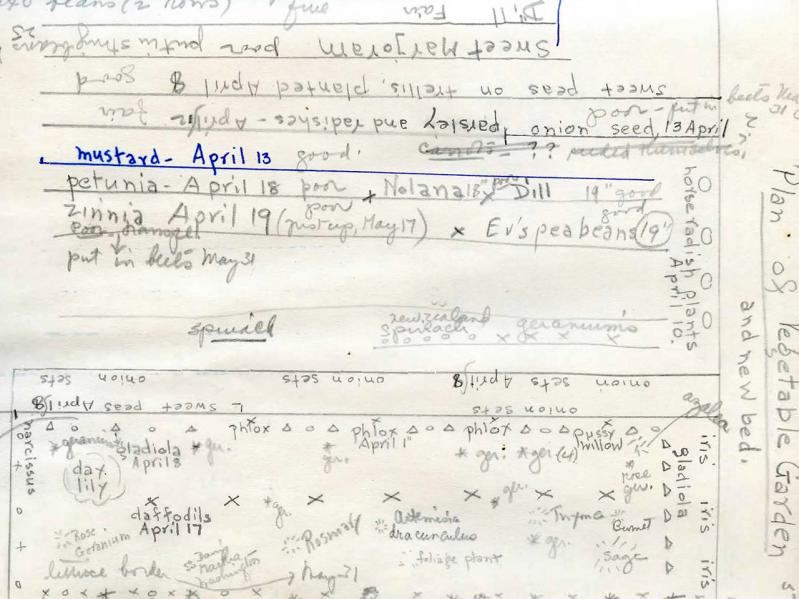 Entirely by coincidence the other day, I found my East Hampton grandmother’s vic­tory garden diary. It is in a blue-covered notebook with blank pages, beginning in 1942 as the United States was entering World War II. Victory gardens had been promoted by the United States government, as well as governments abroad, as a way to ease food demand at home to aid the nation in the first World War and then revived in the second.

From what the diary says, my grandmother was not all that familiar with gardening. She had been a teacher and journalist whose father was a whaler and fisherman turned businessman. She was a diligent record-keeper, writing on the first page how in March she planted daffodil bulbs from Mrs. Hamlin. In early April, Louis Vetault came by to plant daylilies. Then came parsley, chives, onion sets, and peas. My father, not yet 10 years old, helped with watering and turning the soil.

Turning the page of the diary again, I found her plan for the garden drawn across two sheets. She was nothing if not ambitious; not only did the plan note the day of planting but how each variety turned out at harvest time. Lettuce and peas were prodigious; basil and beets were not. By June, she was working in the garden nearly every evening, but she was too busy to keep up the daily record, or so she wrote.

Amid the coronavirus crisis, many thoughts around the East End have turned to gardening. There is both time now, what with movement more limited than usual, and a sense that supplementing one’s own food supply with homegrown fruit and vegetables is a reasonable precaution.

People in trucks were busy Sunday afternoon loading free compost at the town landfill. At my house, Ellis, who is 10, as my dad was then, and I have been working in raised beds getting the soil ready. We have also set up a grow-light seedling nursery in the basement, and I am beginning to think about my irrigation soaker hoses and what kind of mulch to use.

Down near the bay, not everything grows well. Tomatoes, kale, peppers do fine, as does watermelon, surprisingly. I have had poor results with onions, peas, and carrots. Tall marigolds, which supposedly disinterest deer, can be vigorous here; dwarf marigolds never work out.

As with victory gardens brought back in the new war, my growing plots had been fallow for some years before this spring. Now, with more time on my hands than I am used to and a sense of foreboding in the air, it is a fine time for