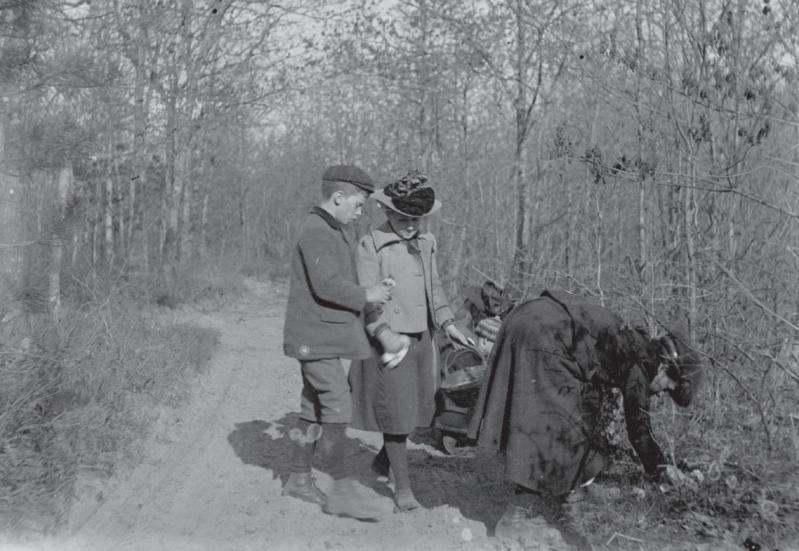 The foot and automobile traffic was considerable when we set out for a ramble at Barcelona Neck just before sunset on Boxing Day. We were a walking party of four: my friend Alex, his son, Theodore, me, and my son, Teddy. We fought upstream for an hour and a half, trying to make forward progress, but were continually halted — untangling our dog leash from strangers’ dog leashes, stepping to the side of the trail to let cars pass, exchanging remarks with fellow ramblers at our elbows about how crowded it was, stopping to whisper our indignation about a pair of pinch-faced perambulators who let us know that the speed races being run by our two boys, up and down the dirt road to the beach, were annoying.

The scene was similar in Northwest Woods on Sunday. Clutches of walkers stood at all the roadside trail heads — by the old cemetery, by Scoy Pond — holding leashes in one hand and coffees in the other. The parking lot by the entrance to Cedar Point Park was overflowing, and the parking lot by the campground’s play zone was nearly full, too.

It is a condition of life in a resort community that you must cope with a continual feeling of resentment at the presence of others (like learning to tolerate a low-grade seasonal sinus headache). But feeling resentful of others’ presence in the woods is something new; it’s kicking things up a notch. The woods used to be where you went to escape Them.

For me, as for most locals, the primitive (and, really, inexcusable) us-versus-them reaction that kicks in when we are forced to share public space is underpinned by feelings of ownership, whether we like to own up to this ignoble impulse or not. “This is my place,” a little red devil on our left shoulder shouts, “not yours. Mine, mine, mine. Go away.” But have you ever noticed how universal — and therefore how doubly irrational — these proprietary impulses are? I’ve written about this before, in EAST magazine: how all of us East Enders (with the possible but not definite exception of first-time weekenders staying in illegal Airbnbs) seem to believe our tenure on the land gives us special rights and privileges. “How long have you been here?” is a stupid question, but everyone is always eager to answer it, always boastfully, and whether that answer is “my family came in 1648” or “we built our house in 1992,” the implication is that anyone who arrived after that noteworthy date should have been met by a bolted door. Unless you are Shinnecock or Montaukett, you really ought to zip it.

So I know full well that I should zip it, myself, when it comes to crowded outdoor spaces. Of course it’s fantastic that our community has successfully maintained the right for all of us, all the public, to ramble the woods and beaches. But . . . but . . . walking in the woods was, once, one of the special things we used to do alone. We never saw anyone else when we went driving on the beach in a big, green truck in the 1970s, and we never saw anyone else when we went into the woods on foot. Split Rock, certain bogs at Napeague . . . before the blazes were painted on the trees, before the trail maps, before “walking” became “hiking,” no one knew how to get out to these spots unless it was through family knowledge. As far as I ever knew as a kid, hardly anyone had that family knowledge. It was ours alone.

My cousin and I followed my late Aunt Mary all around Northwest and Point Woods in the 1980s and 1990s. We never saw anyone else. We would take small, plain sandwiches and Liebniz biscuits or Stoned Wheat Thins in baggies in a jacket pocket, a modest reward at the far end of an out-and-back walk that tasted grand because it was eaten out of doors on a damp, fallen log. I can remember being in the hilly section beyond the Walking Dunes, one time in the mid-1990s, I think, when we rounded a bend and saw mountain bikers approaching — harbingers of what was just around the bend, metaphorically. We smothered our atavistic feelings of offense at this intrusion, and proclaimed aloud how wonderful it was that the woods were free for all to use and enjoy, that the beauty was not privatized.

About 15 years ago — 20?  — I took a week off from work, posed for a Polaroid picture in the shadow of the Montauk Lighthouse, and set out to walk the entire length of Long Island, following the Paumanok Path out from the Point, to end by the East River, with the Manhattan skyline ahead. I was going to write a book that followed a geographical narrative line, rather than a chronological one, a narration running from east to west, with landmarks along the way as chapters, like Bruce Chatwin’s “Songlines.” It wasn’t just from east to west, it was from country to city, from sunrise to sunset, moving from our agrarian past through the American suburbia of midcentury and into the present. I still think this was a good idea, although I never finished either the walk or the book. I only made it as far as the Shinnecock Canal before I had to return to my job in the city; also, my choice of walking footwear had been bad. (This was around the time Wellington boots, with jeans tucked in, were imperative. I can attest that your feet do not want you to walk 50 miles of wending and winding Paumanok Path in Wellington boots.)

If I had the freedom of wealth and time, which I don’t, I would set off again on that Paumanok pilgrim’s way, picking up the trail at Shinnecock Hills. Unfortunately, I do not have the money to wander away from work for great swaths of time, and, anyway, my east-west, country-city narrative line has gotten a bit jumbled up recently. The moment for a linear geographical plot line may have passed. The map and the metaphor have been cut and spliced (as our experience of waking life itself has been cut and spliced by the advent of the internet). The city has well and truly come to the country. I won’t say, boringly, that Cedar Point was “like Grand Central Station” this weekend, but it was definitely as bustling and tense as the 72nd Street dog run at Riverside Park.