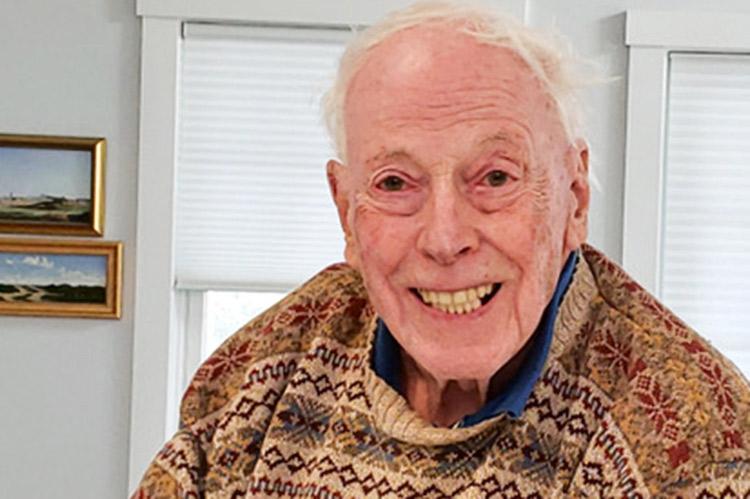 James Gerard Stier of Montauk, who had a long career with W.R. Grace & Company, a multinational with roots in materials, chemicals, and shipping, died at his son’s house in Poughkeepsie, N.Y., on Jan. 3. He was 94 and had been in hospice care for about two months following a bout of pneumonia that required a hospital stay.

His wife, Virginia Natalie Stier, died in 2016. He will be buried alongside her at Fort Hill Cemetery in Montauk on Feb. 4, following a 1 p.m. Mass sung at St. Therese of Lisieux Catholic Church in that hamlet. The Yardley and Pino Funeral Home is handling the arrangements.

The Stiers, both native Long Islanders from the North Shore, bought their property in Montauk as a vacation home in 1978 while still residents of Montclair, N.J. When Mr. Stier retired in the late 1980s from W.R. Grace, they made Montauk their full-time home, migrating in winter months to warmer climates, including Rincon, Puerto Rico.

They were active community volunteers in Montauk and popular on the local social circuit, known, their family said, for their lawn parties abutting the fifth hole of the Montauk Downs golf course.

Mr. Stier spent his entire career with W.R. Grace, which at one time was the 50th-largest publicly owned company in the country. He rose from the mailroom to become a senior vice president and, for more than two decades, director of investor and shareholder relations. He was active in the then-fledgling investor relations field and served as an officer in the National Investor Relations Institute and other professional associations, and was the recipient of numerous professional awards.

An accomplished amateur chef, he honed his skills by fitting in cooking classes between stops on European business trips and by watching Julia Child’s cooking show and poring over his bookcase of cookbooks. “Jim was particularly well known for his cocktail party hors d’oeuvres, and among his immediate family for sumptuous post-Mass Sunday brunches,” his family wrote.

Mr. Stier was born in Brooklyn on Aug. 17, 1928, to Kenneth A. Stier and the former Adelyn O’Brien. Later the family moved to Great Neck, where he spent his childhood. During World War II, he attended a Benedictine monastery school in Rhode Island, Portsmouth Priory (now Portsmouth Abbey), before heading to Princeton University. He graduated in the class of 1950 from what was then called the Woodrow Wilson School, and later earned a master’s degree in finance from New York University. While at Grace, he took part in an executive management program at the Harvard Business School.

At college, Mr. Stier “was on a stellar 150-pound crew team, which won the coveted Thames Challenge Cup at the Henley Royal Regatta in England in 1948 and 1949,” his family wrote. He continued athletic pursuits for many decades, playing squash and competitive paddle tennis and golfing wherever he could. He won a number of competitions playing together with his children at the Montclair Golf Club.

During the Korean War he served in the Air Force in various capacities at Floyd Bennett Field in southeast Brooklyn.

Mr. Stier and his future wife were introduced by mutual friends in Great Neck while both were working in Manhattan, she as a department manager at Lord & Taylor’s flagship store on Fifth Avenue, and “a whirlwind romance ensued,” their family wrote. They married “defiantly,” on April 1, 1955, and lived in Manhattan’s Stuyvesant Town until after their third child was born and they moved to the suburbs. After raising five children in Montclair, they moved to the neighboring town of Verona.

Since his wife’s death, Mr. Stier has lived with family members including his daughter Heidi Barberio in Waltham, Mass., and his son Kenneth J. Stier in Poughkeepsie. In addition, he is survived by his children Greg W. Stier of Miami and Albuquerque, Gretchen G. (Gigi) Callahan of Nantucket, Mass., and Gerard J. Stier of Hoboken, N.J. His younger brother, Kenneth A. Stier of Great Neck, also survives, as do six grandchildren and three great-grandchildren. His sister, Adelyn Byrne, died before him.

His family has suggested donations to Concerned Citizens of Montauk, P.O. Box 915, Montauk 11954.