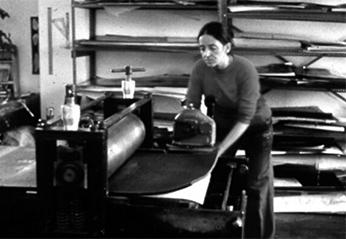 Marilyn Thompson, an abstract artist whose career spanned 50 years, first came to Montauk as a child because her father was a sportfisherman in the 1930s and 1940s.

While her career took her to Vietnam, Greece, Yugoslavia, Morocco, and Korea, among other far-flung locales, she returned to Montauk throughout her life. In 1986, she bought a vacation property in Hither Hills, which she eventually gave to one of her daughters, who lives there now. She had a studio on South Embassy Street, and later lived at Rough Riders Landing for 15 years. The paintings of her “Montauk Series” were created there.

Known professionally as Sica, Ms. Thompson died on Dec. 11 while vacationing in Madeira, Portugal. She was 90.

She first made her mark in the 1950s as an innovative printmaker, using a Charles Brand press and developing techniques that became her signature style. While her work was predominantly collagraphy, silkscreens, and etchings, she also created paintings, constructions, sculpture, and ceramics, and she is represented in public and private collections worldwide.

Ms. Thompson was born in New York City on May 21, 1932, to Vincent Sica and the former Constance DePasquale. Raised there, she attended the Art Students League and Pratt Institute in Brooklyn, where she also lectured.

Over the course of her career, she studied painting in Vietnam with Duy Than, printmaking in Athens with Emanuel Pilidikis, and she printed at the New York studio of Robert Blackburn, a master printmaker. She established a printmaking studio in Istria, Yugoslavia, studied Indian weaving in Guatemala, fabricated mosaics in Pietrasanta, Italy, and cast bronze sculptures in Madrid.

While her work was shown widely abroad, her American exhibitions took place at the Neuberger Museum in Purchase, N.Y., the Indianapolis Museum, the Los Angeles County Museum of Art, New York University, the Brooklyn Museum, and the New Jersey State Museum in Trenton.

“I see my work as expressing both male and female elements within a lively tension,” she said in a statement on her website. “Pulling from the opposite poles; negative, positive, space and form, inner and outer. Often in my recent works, I discern an inner form that contradicts the outer. This suggests to me a coming together of new elements that are involved in combustion.”

When not traveling or in Montauk, Ms. Thompson used Chelsea as her base. She lived for many years in a building on West 13th Street that was owned, and lived in, by the rock band the B-52s. She also maintained a loft on West 19th Street.

Ms. Thompson eloped with Charles V. Collins in 1950, and married William Thompson in Amagansett in the late 1980s. Both marriages ended in divorce.

She is survived by four children, Deborah Bowen and Paul Collins of Manhattan, and Adrienne Collins and Patrick Collins of Montauk, as well as three grandchildren, Sean and Orrin Frazier of Montauk, and Noah Collins of Barcelona, Spain. A half brother died before her.

Ms. Thompson was cremated in Portugal.

This article has been modified from its original and print version to include Ms. Thompson's professional name, Sica, in the headline, and to include a photograph of the artist at work.