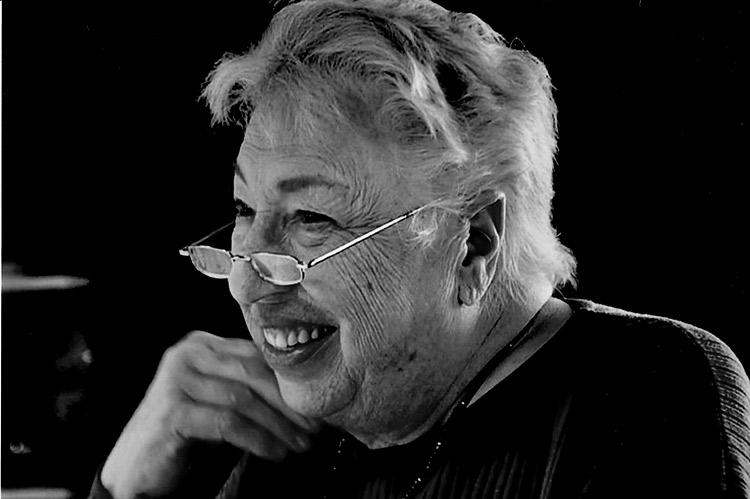 Vaughan Allentuck, a resident of Springs for 52 years and a founding member of the Community Theater Company, died on Sept. 10 of advanced chronic obstructive pulmonary disease, which she had for many years. She was 90.

Ms. Allentuck was primary casting director for all the shows produced by the Community Theater Company over its more than 15 years. “If you happen to be one of the hundreds of people who had a role in one of C.T.C.’s plays, it was because she cast you,” her children wrote. “She was very proud to have had a role in all of the company’s 61 productions, whether as casting director, actor, stage manager, manning the follow spotlight, or running the sound or lighting.”

In her later years, Ms. Allentuck “was known by many as the old lady on the porch,” her family said. “She loved to sit outside and read The New York Times cover to cover and wave to the passers-by. If you happened to be walking or riding on the wrong side of the road, she was sure to let you know.”

Born on Sept. 4, 1932, in New York City to theatrical parents, Harry Bellaver and the former Gertrude Dudley Smith, she grew up in Tappan, N.Y., and went to Tappan Grammar School, “where she earned the nicknames Four Eyes, Buck Tooth, and Slugger,” according to her children. Afterward, she went to Manumit School in Bucks County, Pa., and Nyack High School in Nyack, N.Y., “where her monikers did not follow her.”

After graduation she followed her theatrical bloodline to the American Academy of Dramatic Arts. She landed a few television roles, but in order to pay the bills went to work as secretary and casting director for the Broadway producer Kermit Bloomgarden. It was there that she met her future husband, “Broadway” Max Allentuck.

She was billed as casting director for “The Music Man” and “Look Homeward, Angel,” but also worked on “The Most Happy Fella” and “The Diary of Anne Frank.” The pair settled on the Upper West Side of Manhattan, where they lived for 13 years and raised two children, Joshua and Rachael. In 1971 the family moved to their country house in Springs. Another son, Zachary, was born soon after, at home, “in order to avoid the obstetrician on call, who had previously told the ‘ancient’ 40-year-old, ‘women like you should be sterilized,’ ” her family recalled. A neighbor, Jeanne Budd, who was a registered nurse, “rushed over in the wee hours to (in her words) catch Zac.”

Not long after her youngest child was born, Ms. Allentuck again felt the pull of the stage and joined fellow local thespians at the Maidstone Regional Theater Company. This spawned the Community Theater Company, which she started with Meg Gage, Valerie Austin, Katie Meckert, and Deede Windust. C.T.C. was the first all-woman created and controlled theater group in East Hampton.

“Vaughan put her heart and soul into C.T.C.,” her family wrote. The company produced four shows a year, including one musical, and performed them in the off-season at Guild Hall. C.T.C. was well known for its fund-raising events April Antics, Holly Jolly Brunch, and CTC Presents a Yard Sale, which took place on Ms. Allentuck’s lawn.

Ms. Allentuck was an integral part of all aspects of production, including set building and designing. Her family was “forever amused when attending performances to see various articles of furniture, rugs, and household items borrowed from the home appearing onstage.” She was best known for acting in many of the company’s productions, among them “Come Back, Little Sheba” (Lola Delaney), “Blithe Spirit” (Madame Arcati), and “Annie Get Your Gun,” in which she played Chief Sitting Bull, a role that her father had originated in the original and revival productions on Broadway.

After retirement from C.T.C., she devoted her time to doting on her grandchildren. In addition to reading The Times from cover to cover, she was an enthusiastic crossword puzzler and completed The Times crossword puzzle daily. “Of the voluminous number of catalogs that were delivered to her house, there was not a single catalog that she did not consider her personal responsibility to peruse each and every page, to the point that her family forbade her from purchasing anything from a catalog for holiday gifts.”

In the early years of the Great Bonac Footrace, winners were awarded individually wrapped packages containing Ms. Allentuck’s homemade baklava. “We all hope this was appreciated, because we could never understand why race originator, Howard Lebwith, would make such a request for an athletic event.”

“She led a long and fulfilled life and will be missed by many,” her family wrote. As was her wish, there will not be a public service. Donations in her name have been suggested to Susan’s Lunch Drawer at the Springs School (established in memory of her dear friend Susan Bennett), the Accabonac Protection Committee, or the Springs Improvement Society.

“Or, if you feel motivated,” her family said, “feel free to create a ‘Slow Down Fireplace Rd.’ organization, which would make her very happy, as she was also known to yell ‘SLOW DOWN’ to cars and trucks traveling too fast past her house on the north end of Fireplace Road.”