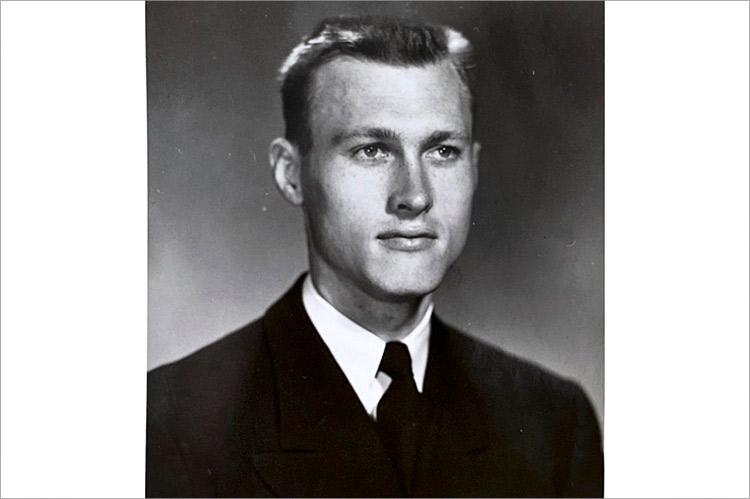 In expression of that love, “He’d measure whole coffee beans with actuarial precision, grind them to a uniform consistency, and meticulously brew a fresh cup most mornings of their 21-year marriage. He’d bring the cup bedside and lovingly place the handle for an easy reach, and then read to her about world affairs,” she said.

“He was a superb cook and provided our family with decades of delicious hearty dishes: veal marengo, coq au vin, navarin d’agneau, Christmas roast goose, and butterflied leg of lamb, to name a few. This was one way he showed his affection, by lovingly bringing our family together over a shared meal. He even made rosemary-braised lamb shanks for East Hampton’s hungry. He was ever eager to indulge his grandchildren in an ice cream.” she said.

Mr. Dreher was born on Sept. 17, 1930, in Glendale, Calif., to Clarence Dreher and the former Ruth McMillan. He graduated from Benjamin Franklin High School in Los Angeles in 1947, and hitchhiked to the State University of Iowa where he received a Bachelor of Arts in actuarial mathematics in 1951. After graduating, he served as lieutenant junior grade in the Korean War on the admiral’s staff of the U.S.S. Bon Homme Richard aircraft carrier as an assistant air intelligence officer and staff tactical watch officer. He graduated from the United States Naval Intelligence School in 1952 to return thereafter as an instructor. He was accepted into the Naval Language School in 1953.

The recommendation letter from the commander of carrier division one noted that he had an “interest in and excellent knowledge of world affairs,” and as such, “was assigned the duty of conducting frequent briefings of the staff on this subject.”

When the war ended, he hitchhiked to New York City, bought a winter coat at the Salvation Army, and then booked a room at the West Side Y.M.C.A. and began his career as an actuary at New York Life Insurance Company, his family said.

By 1956, Mr. Dreher was a fellow in the Society of Actuaries, where he then served as governor in 1971. By 1960, he was a principal at Lybrand, Ross Bros. & Montgomery (now PwC). From 1974 to 1977, he was a director of the American Academy of Actuaries, and by 1977, he was partner in charge of human resources consulting at Peat, Marwick, Mitchell & Co. (now KPMG L.L.P.), a post he held for eight years before founding William A. Dreher & Associates and Compensation Strategies, where he served as managing director.

Since the late 1960s until the recent past, the Dreher family’s secondary residence was on Egypt Lane in East Hampton, but in innumerable ways it was truly Mr. Dreher’s primary residence both in spirit and in heart, they said.

Mr. Dreher was a kind and generous man of superior intellect, according to his family. A voracious reader, he was a master of the English language, who, according to friends, possessed a subtle and wry sense of humor. He sought out thought-provoking and probing conversations.

He was a man who grappled with life’s deeper truths and was full of great faith. He served as a member of the vestry of St. James’ Church in New York and St. Luke’s Episcopal Church in East Hampton and was chairman of the finance committee of both churches. He was a former senior warden of St. Luke’s, and was awarded the Bishop’s Medal for Service to the Diocese.

Without fuss, he wholeheartedly threw himself into whatever task was at hand, without half measures, seeking excellence, and often obtaining it, his family said.

A golfer and member of the Maidstone Club since 1971, he served on its board of governors from 1979 to 1982 and was also a former member of National Golf Links of America since 1991. He also served as a president of the Union League Club in New York City.

Mr. Dreher was a life trustee of Guild Hall, from 1991 until his death, chairman of the institution’s board from 1986 to 1989, and a member of its finance committee from 1994 to 2022. He was a trustee of the Thomas Moran Trust, where he was instrumental in the preservation of the Thomas and Mary Nimmo Moran House. In New York City, he also served on the board of the Manhattan Eye, Ear, and Throat Hospital and the Hospital Chaplaincy, which provides bedside ministry and chaplaincy training.

Mr. Dreher is survived by his wife of 21 years, Diane James Dreher, and her three children. He was preceded in his death by his wife Josephine de Rosier Dreher (1983), and survived by their two children, William A. Dreher Jr. and Marie-Anne Dreher Ewig. He is also survived by 10 grandchildren.

The Very Rev. Denis C. Brunelle will officiate at a service for Mr. Dreher next Thursday at 11 a.m. at St. Luke’s Church in East Hampton. Following the service, Mr. Dreher’s ashes will be interred in the church’s memorial garden.

The family has suggested donations to the outreach program at St. Luke’s.