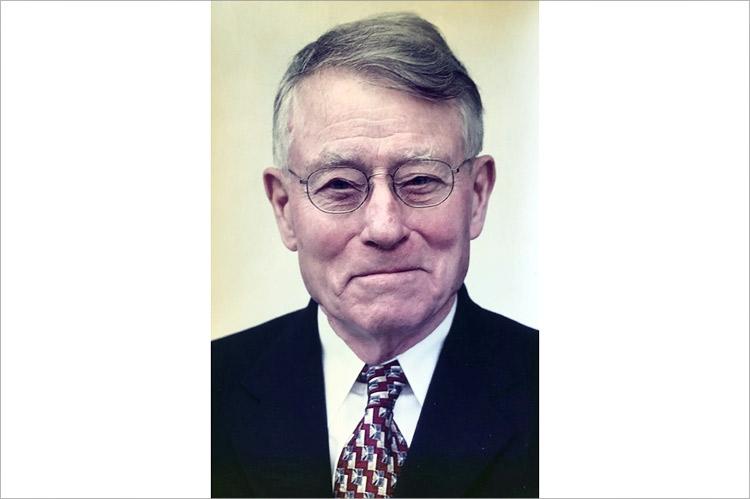 Edwin Livingston Sherrill Jr., a descendant of one of East Hampton’s early families and a member of the East Hampton Village Board for many years, died on Jan. 19 in Charleston, S.C. He was 99.

Mr. Sherrill was a direct descendant of the first Sherrill in East Hampton, Samuel Sherrill, who married Elizabeth Parsons in 1662, and the great-great-grandson of Abraham Sherrill, a veteran officer of the Continental Army who married Anna Huntting in 1800 and bought the Conklin farm across from the Dominy farm and woodworking shop. The farm stayed in the Sherrill family for seven generations, and the 1858 Stephen Sherrill house is on the National Register of Historic Places.

Known as Ed, Mr. Sherrill was born on Aug. 20, 1922, in East Hampton to Edwin L. Sherrill and Maria Parsons Sherrill. He grew up here, graduating from East Hampton High School in 1940. While attending Brown University in Providence, R.I., in March 1943 he was called to action by the United States Army’s Enlisted Reserve Corps. He served as a combat engineer in Company C of the 320th Engineering Battalion with the 95th Infantry Division, landing at Omaha Beach in Normandy in September 1944. He received a Purple Heart in May 1945, along with three bronze service stars.

After being discharged from the Army and until the 1960s, Mr. Sherrill owned and operated commercial trawlers based in Montauk, and in the winter months helped with the family dairy farm. During this time, he earned a certificate in naval architecture and designed many fishing and pleasure boats.

After earning college degrees, he extended his love of fishing and the sea by teaching oceanography, ichthyology, navigation, and marine science courses at Suffolk Community College. He retired, after 11 years, in 1987, but continued to teach as an adjunct professor until 1995. During this time, he obtained his Coast Guard captain’s license, and operated and crewed on many Suffolk and National Oceanic and Atmospheric Administration research vessels. He continued his mentorship by helping others obtain their Coast Guard licenses.

But beyond his love of the water was a love for his hometown. Mr. Sherrill, who served on the East Hampton Village Board for 33 years, is best remembered for his commitment to village preservation, particularly the acquisition of the Sea Spray property and the creation of Herrick Park, as well as his support for the Ladies Village Improvement Society, the East Hampton Historical Society, and the village fire and ambulance services. He was especially proud of his oversight of the renovation and operation of the village’s classic oceanfront pavilion at Main Beach, which was named in his honor in 2017.

Key among his hobbies and pastimes were building furniture for his family and crafting hundreds of model boats. Other favorite activities included beekeeping and sailing. A Freemason, he served in the Star of the East Lodge No. 843, where he was also a Master Mason. He was a trustee at Apple Bank and for a time held a real estate license. He was an enthusiastic reader and learned to use a computer in his 70s, eventually compiling personal reminiscences in three self-published books.

Mr. Sherrill’s deep appreciation for the sea, his country, and the village was eclipsed only by his love of family. He welcomed all with the same affection, and always had a warm hug or handshake for everyone in his life, his family said.

Mr. Sherrill’s family wishes to express heartfelt thanks to the multiple caregivers who allowed him to live comfortably in his own surroundings for several years until his death.

A private burial service will be held in East Hampton at a future date. Mr. Sherrill’s family has suggested memorial contributions to the East Hampton Historical Society at easthamptonhistory.org/join-donate.