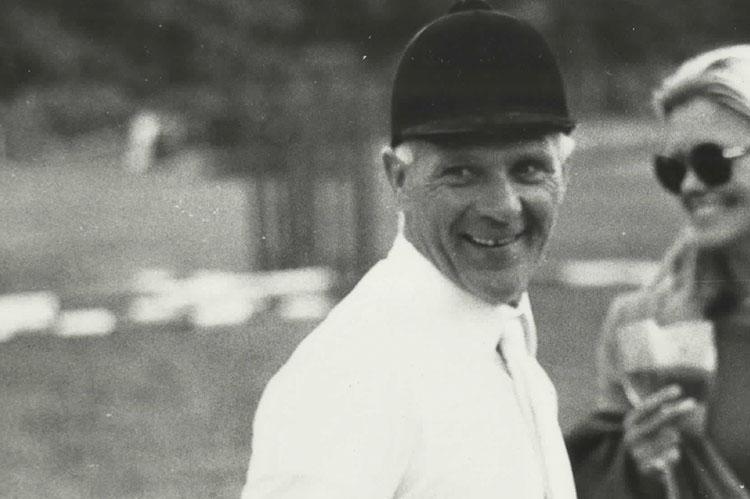 Harry de Leyer, a native of the Netherlands known as "the Galloping Grandfather," attesting to the fact that even in his late 50s he remained a grand prix show-jumping rider to contend with here and abroad, died on June 25 in Stanardsville, Va., at the age of 93.

In an interview with The Star some years ago, after Mr. de Leyer bought what is now East End Stables in East Hampton, he said he had first got on a horse when he was 4 and began jumping in competitions when he was 9.

His father, a farmer and brewer, who during World War II was active in the resistance — as was his son — wasn't inclined to subsidize a show riding career: Harry could have a lighter horse than the Belgians that drew the beer about, he was told, but only if the horse worked too.

After the war, Mr. de Leyer was the leading rider on the Netherlands' junior equestrian team that toured Belgium, Luxembourg, and France, and he went to the London Olympics in 1948 as an alternate before coming, in 1950, with his wife, Johanna, to this country, sponsored by the family of a deceased paratrooper the de Leyers, whose farm was a resistance waystation, had cared for.

He worked a tobacco farm in Greensboro, N.C., to begin with — a venture that proved unprofitable — while at the same time schooling and showing some horses in local shows. At one of them, he was spotted by Mickey Walsh, a well-known trainer (and future Show Jumping Hall of Fame inductee), who asked if Mr. de Leyer was interested in working with horses. "I told him," Mr. de Leyer said, "that it had been my dream since I was a little kid."

Soon after, thanks to the good offices of Mr. Walsh and of David Dillard, president of the Old Dominion Box Company, a Virginian who provided him with seed money to buy horses, Mr. de Leyer was on his way in the equestrian world. The Knox School in St. James hired him as its riding instructor in 1954 — a position he held for 22 years. In the summertime, he began giving lessons on a two-acre remodeled chicken farm on Moriches Road, and bought his "first big jumper, St. John, for $175, at a race track in Charlottesville, Va."

The owner said he was "a rogue," but Mr. de Leyer bought him anyway. St. John became the first horse he showed as an open jumper in Madison Square Garden.

St. John was the first in a long line of ribbon-winning jumpers Mr. de Leyer owned and rode, a list that included Wayward Wind, Night Arrest, Pedro, Dutch Brandy, Dutch Crown, and, of course, Snowman, the most celebrated of all, "a freak of nature," in his owner's words, who could easily sail over 7-foot-2-inch fences, and over other horses as well.

The two met in 1956 as the long, wide, and quiet plow horse, "with an intelligent head and good legs," was, following an auction in Amish country that Mr. de Leyer was late for, about to be loaded onto a cattle truck bound for the glue factory.

He paid $60 for the grayish-white gelding and a $20 van charge. The seller said he could have the $60 back if the horse, whom he pronounced "unsound," didn't work out.

Mr. de Leyer said he'd been looking for "a weight-carrying schooling horse," not a jumper. "He didn't look anything like a jumper -- he was very long in the body, he stumbled over the poles of a two-and-a-half to three-foot jump, he ran like he was drunk. . . ."

The next summer he sold him for $160 to a chiropractor who lived several miles away and was looking for a nice quiet horse to ride on the trails.

"Then, one day, clip, clop, clip, clop, he come right in and stood there in my ring where I teach him. I called the doc to come pick him up. He told me that he jumped the fence. I told him to raise it."

It soon became apparent that it didn't matter how high the fence was raised. One day, Snowman -- who had been so named by Mr. de Leyer's then-4-year-old daughter, Harriet -- arrived in Mr. de Leyer's ring dragging a log and a 30-foot halter. Soon after, he was returned to Mr. de Leyer's care, and the rest is history.

"I showed him in 1958. He was the champion at Madison Square Garden and all over the U.S. He won the most points for five years. He could jump the biggest jumps . . . drop the reins and he would keep pushing."

Eleanora Sears had once offered to buy Snowman for $100,000, but Mr. de Leyer, as was the case with the many other offers, demurred.

The story of his and Snowman's victories and friendship — both were crowd favorites — has been the subject of a documentary, "Harry and Snowman," which premiered at the Hamptons International Film Festival, and of several books, the most recent of which, written by Elizabeth Letts, was a best seller in 2011. Snowman was inducted into the Show Jumping Hall of Fame in 1992.

A New York Times obituary last week said that when it came time for Snowman to be euthanized, at the age of 20, Mr. de Leyer "couldn't bring himself to be there when the veterinarian took Snowman from his stable. But the horse refused to go until Mr. de Leyer arrived, teary-eyed, to walk him out."

In that same obituary Harriet de Leyer was quoted as saying, "I think that horse knew my father had given him a second chance."

"Snowman and me both came from nothing," Mr. de Leyer told the talk show host Dick Cavett, "but together we made it to the top of the world. . . . Snowman was more than a horse to me -- he was my friend."

Mr. de Leyer, who was born in Sint-Oedenrode, a town near the Belgian border, on Sept. 21, 1927, leaves five of his eight children, Harriet, Martin, Andre, John, and AnnaMarie, 14 grandchildren, and three great-grandchildren. Three of his children, Joseph, William, and Harry Jr., died before him. His second wife, Joan de Leyer, with whom he lived in Dyke, Va., where he had a breeding farm, died in 2013.