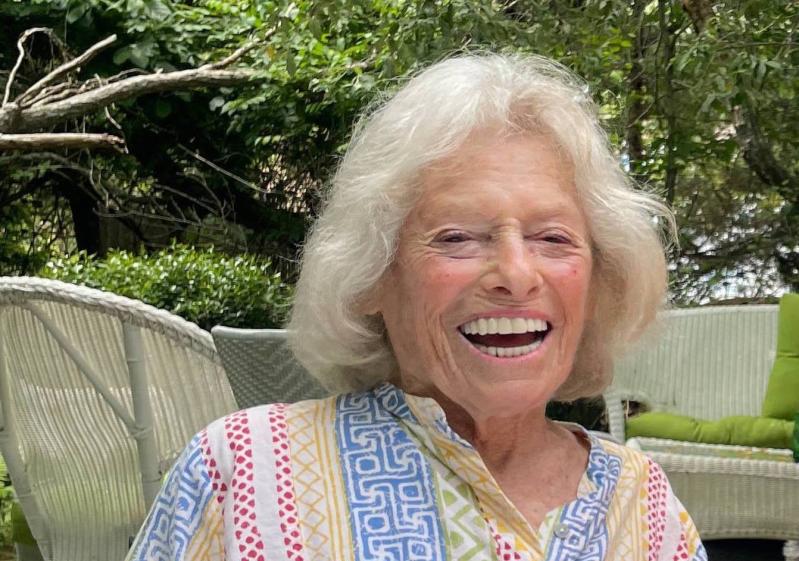 Betty Greene Mazur, a longtime Amagansett resident and a constant presence in East End politics, died on June 16 at Stony Brook Southampton Hospital during a scheduled procedure. She was 90.

Ms. Mazur was a staunch Democratic political activist, fearless environmentalist, lover of wildlife, intrepid traveler, and a loving, generous, and supportive mother and grandmother, and loyal friend, her family wrote. "She was beloved not just for her winning smile, but her personal and professional selflessness, indefatigability — especially in the face of adversity — and an acute sense of humanity."

Ms. Mazur was born on Feb. 11, 1931, in New York City to David and Miriam Siegelstein Greene and grew up in the Bronx. She attended Syracuse University and graduated from Barnard College with a degree in political science before going on to earn her master's degree from Columbia University. Ms. Mazur became politically active while in college, where she was an antiwar and civil rights activist. She held fast to those values, attending Martin Luther King Jr.'s March on Washington in 1963, the May Day antiwar protests in 1971, and innumerable protests on the East End and in New York City and Washington, D.C.

In 1951, she married D. Bennett Mazur of New Rochelle, N.Y., and the two moved to Fort Lee, N.J., where they became involved in their local tenants' rights organization. Ms. Mazur was elected chairwoman of the Fort Lee Democratic Party and served as a New Jersey delegate for several Democratic presidential conventions. She encouraged her husband to run for political office, helping to direct his successful elections to Bergen County Freeholder and subsequently New Jersey State assemblyman. He died in 1994.

While raising their four children in New Jersey, Ms. Mazur studied to become an English teacher at Dwight Morrow High School, a predominantly Black and perpetually underserved high school in Englewood, N.J. She taught there for 22 years. She took her political activism to Dwight Morrow, where she was elected as an officer of her teachers union and fought for better conditions for teachers and students.

Ms. Mazur first fell in love with the East End when, early in their marriage, she and her husband spent a weekend camping in Hither Hills State Park in Montauk. They decided to build a modest summer house in the dunes below Bluff Road in Amagansett and settled on Clinton Academy Lane in 1965. Even then, Ms. Mazur was committed to maintaining the integrity and value of the beach environment. She was a regular speaker at East Hampton Town Zoning Board of Appeals meetings, challenging variance requests that she felt would harm the local ecosystem.

She joined the East Hampton Democratic Committee in the 1980s, driving from New Jersey after a day spent teaching so she could attend strategy sessions aimed at preventing here the overdevelopment that plagued western Suffolk. Ms. Mazur was determined to preserve the rural beauty of Amagansett, her family said. She served as chairwoman of her road association and joined the committee to create both the Amagansett Main Street Historic District and the Bluff Road Historic District. In addition, she was appointed to the New York State-sponsored study to recognize areas of scenic significance in the East Hampton and Amagansett corridor.

Ms. Mazur retired from teaching and moved to Amagansett full time in 1992. She volunteered for the Retreat, providing assistance to victims of domestic violence, and became even more involved in local politics, serving on the East Hampton Democratic screening committee and eventually becoming chairwoman of the East Hampton Town Democratic Committee. She was acting vice chairwoman at the time of her death.

Ms. Mazur "understood how vitally important the right to vote is to our democracy," her family wrote. During the run-up to every primary and general election, she was a fixture outside the East Hampton and Amagansett Post Offices, where she would set up tables and encourage passers-by to register to vote. She "wedded her love of public service and advocacy with her love of learning, taking Spanish lessons at age 89 so that she could better communicate with the growing Latinx community of East Hampton," her family wrote.

She loved traveling and had visited nearly every corner of the globe, from the Antipodes to Africa. "How she got to her destination did not matter, so long as she got there quickly in order to absorb and experience different cultures and outdoor adventures, including swimming with wild dolphins off the coast of New Zealand, parasailing in Queenstown, falconry exhibits in the Cotswolds or communing with elephants in Botswana," her family said. She instilled that love of outdoor adventure and curiosity about the world in her children and grandchildren.