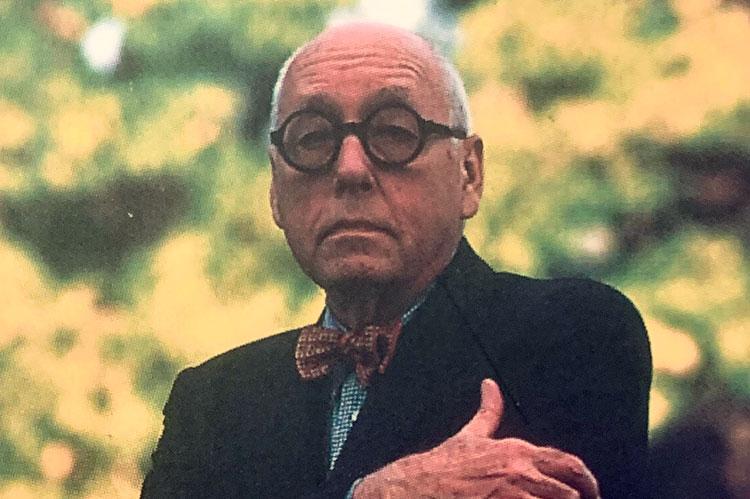 Adam Lewis was a man of many talents and accomplishments. After earning a B.A. from Florida State University and a graduate degree from the Berkeley Divinity School at Yale, he served from 1967 to 1972 as rector at three Episcopal churches in Connecticut: St. Luke’s in Darien, Zion in North Branford, and Emmanuel in Killingworth.

At the same time, he earned B.F.A. and M.F.A. degrees from the Yale School of Art and Architecture, where he studied with the graphic designer Norman Ives and assisted the photographer Walker Evans.

He also worked during those years as an art director at Doyle Dane Bernbach, where he designed iconic ads for the original Volkswagen Beetle, among many others. The firm is said to have been the model for the “Mad Men” series.

From 1973 to 1980, Mr. Lewis was rector of St. Paul’s in Fairfield, Conn., where he established programs bringing the church and the wider community together, focusing on young families, and was influential in promoting Connecticut Hospice, the nation’s first.

He subsequently served at Trinity-by-the-Cove in Naples, Fla., where he raised funds for the parish’s outreach programs, and at Christ Church Christiana Hundred in Greenville, Del., where the parish campus expanded to prevent encroaching development.

With one exception, Mr. Lewis left parish ministry in 1993, when he moved to New York City to study at the Parsons School of Design and establish an interior decorating practice that remained active until two years ago. The exception was when, in the late 1990s, he served as assisting clergy at St. Luke’s in East Hampton, under Darwin Price.

Mr. Lewis, who was granted an honorary doctorate of divinity by Yale, wrote four books on design and material culture: “Van Day Truex: The Man Who Defined Twentieth-Century Taste and Style” (Viking Studio, 2001); “Albert Hadley: The Story of America’s Preeminent Interior Designer” (Rizzoli, 2005); “The Great Lady Decorators: The Women Who Defined Interior Design, 1870-1955” (Rizzoli, 2009), and “Billy Baldwin: The Great American Decorator” (Rizzoli, 2010). His writings appeared in such publications as Architectural Digest, House and Garden, and Veranda.

A fifth book, “Cooking on the East End at Churchill Cottage in Bridgehampton, Long Island,” is being prepared for posthumous publication. “The concept of the book is how to make food taste good,” said Thomas K. Chu, Mr. Lewis's spouse and life partner for 29 years, who survives.

“In the end, everything he has done is really about hospitality,” said Mr. Chu. “He considered the whole realm of design and food and entertainment as being of one fabric. He was an amazing human being, a real Renaissance man. He didn’t stay in the box.”

After Mr. Lewis’s death, the New York Social Diary republished a 2010 interview with him. The writers, Sian Ballen and Jeff Hirsch, said in the introduction, “Much like his books, Adam was a literate and intriguing man who loved to tell stories and converse on just about any subject, from his dear friendship with Albert Hadley to divulging his favorite meat loaf recipe.”

Adam McNealy Lewis III died of a sudden heart attack on Nov. 25, 2020, at his home on Halsey Lane in Bridgehampton. He was 83.

Mr. Lewis was born on Feb. 14, 1937, in Marianna, Fla., to Adam Lewis II and Lois Ophelia Gay. He lived in Florida until moving to New Haven to attend divinity school.

In 2003, he and Mr. Chu bought the Bridgehampton house and made it their home. They were married on Oct. 21, 2011.
Mr. Lewis’s former spouse, Rosalind Warner Lewis of Mount Desert, Me., and his daughter, Molly MacKinnon Lewis and her wife, Elizabeth Lee Carroll, of Todd, N.C., also survive.

A memorial service and reception will be held at St. Ann’s Episcopal Church in Bridgehampton on May 1 at 1 p.m. Seats can be reserved by contacting the church, 631-537-1527.

Memorial donations can be made to the Peconic Land Trust, peconiclandtrust.org.