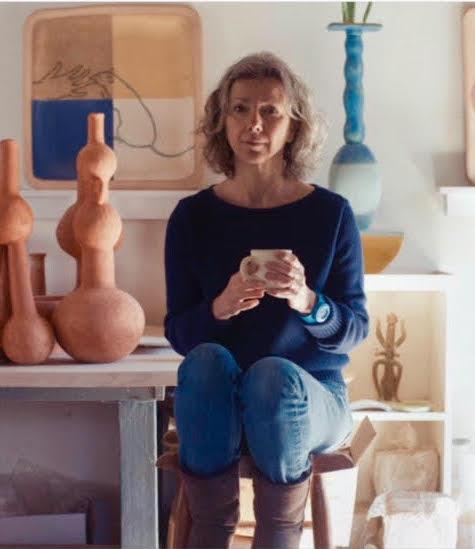 A maker of colorful and evocative ceramic sculpture, Diane Mayo was a painter of small mysterious landscapes featuring animals before she took her first ceramics class in 1984. It would precipitate a complete transformation in her work for decades to come.

Ms. Mayo, who lived and kept a studio in Montauk, died of cancer on the night of Feb. 22, just shy of her 73rd birthday on the 25th. It was a sudden and short illness, first diagnosed around the holidays.

Her work was known most recently through a number of exhibitions at the Drawing Room gallery in East Hampton, where her ceramic sculptures were given three solo shows over the past decade. She also showed at the Leslie Heller gallery in Manhattan and a number of galleries here and in the city previously. Her shows were reviewed in The New York Times, The Star, and several art publications.

Her vessels and objects are marked by an engagement with art history, both ancient and modern, as she synthesized whatever was inspiring her at the time. In the case of her Drawing Room exhibitions, it might be the late collaged canvases of the Abstract Expressionist Conrad Marca-Relli, Nigerian weavings, or Cypriot material culture from the Bronze Age. Her masterful use of glazes kept at least some part of her in the realm of painting.

"I started out as a painter," she told The Star in 2009. "But I felt that to be the kind of artist I wanted to be, I needed to give up control," a hallmark of the process of firing ceramics where surprises are inherent. Her husband of 48 years, Rex Lau, who survives, was also not afraid of color, and their adjacent studios often led to cross-pollination in their work.

They came to Montauk in 1980 after their building in the city was sold, Ms. Mayo recalled in The Star. Edward Albee had transformed a large barn on his property into the headquarters for his foundation's residency program. "Edward needed someone to take care of his Irish wolfhounds, so we came here for the summer," she said. They never left. Mr. Lau became facilities manager and she was the caretaker.

They became very close to Albee, who said about Ms. Mayo's glazing, which varied from thick to sheer and shiny to dull, and her use of color: "I see you have it down to a quasi science." Her friend Barbara Jo Howard shared a poem Albee wrote offering tribute to her and her role in the lives of his dogs. In it, his dog Samantha speaks from the grave, noting her burial and that "Gentle Diane, the potter, baked clay biscuits for me" to take her through the afterlife.

Ms. Mayo gained some renown for her own efforts in writing, including two short and witty illustrated murder mysteries tied up in the consumer culture of 1980s New York City. "Murder at Bean and Beluga" was published by the Permanent Press in 1983 and "Murder at the Big Store" by St. Martin's Press in 1984. The Village Voice called her first mystery "the funniest book enterprise of the year. The illustrations are vaguely Goreyesque, and tell the tale of the internecine carnage amid tortellinis that, squashed by corpses, are upped in price."

Ms. Howard, who was also a student of the artist, recalled Sundays spent working with her in her studio with a small group of friends when they weren't sailing or hiking. She remembered her as an avid gardener and a fluent reader and speaker of Italian who studied with the same class in East Hampton for 20 years.

Mr. Lau said one of her main interests was other people, with Ms. Howard adding that she was the least judgmental person she had ever met. "She was kind, gentle, and a very, very good person." She volunteered in the Montauk Community Garden and at the Montauk Library, serving on the board for a brief time.

"She held an annual breakfast following the New Year's Day plunge in Montauk that lasted all day, with locals coming and going as well as many art collectors," Ms. Howard recalled. For about a decade, she was part of a women's poker club hosted by Suzanne Gosman.

Ms. Mayo was born in Syracuse to Vincent Mayo and Augusta Colozzo Mayo and grew up there. She received her bachelor's degree at Syracuse University and a Master of Fine Arts degree at the University of Massachusetts. In addition to her husband, a sister, Maryann Solazzo, survives her. Following cremation, a private service will be held in the spring.