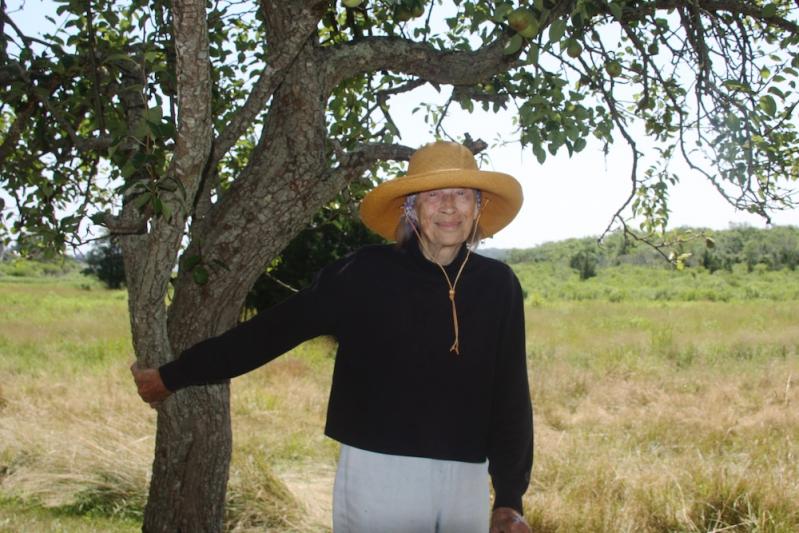 Francile Downs, an abstract painter known for vibrantly colored canvases inspired by East End landscapes, died on Aug. 8 at home in Springs. She was 93, and had been in declining health for a few years.

Her paintings “burst with energy and suggest not only physical weather and season, but psychological mood and time,” B.H. Friedman, the late art critic and an early collector of Jackson Pollock’s work, had said of Ms. Downs. “Simultaneously, the work challenges and delights.”

Her paintings have been featured in solo shows in galleries here and in New York City, most recently as the inaugural exhibition at the Arts Center at Duck Creek in Springs in June of 2018. Before her abstract work, she had done decorative stenciling for many years, and co-wrote a book on the subject.

Known as Cile, she was born on Aug. 4, 1927, in Waco, Tex. She grew up there and graduated from Baylor University with a bachelor’s degree in art. After spending a year at the Hans Hofmann School of Art in New York City, she earned a master’s degree in painting from the University of Iowa.

It was at the latter school that she met Sheridan Lord, a fellow art student and landscape painter whose family owned a house in Amagansett. They married in 1952 and two years later moved to Springs, where they joined a community of artists that included other married couples -- Pollock and Lee Krasner, and James Brooks and Charlotte Park.

In the late 1950s, they bought property on Accabonac Harbor and built the house Ms. Downs would live in for more than 60 years. While furniture shopping, the couple bought a large round dining table at a secondhand store in Southampton, and it turned out to be too big for their home, according to Helen A. Harrison, the director of the Pollock-Krasner House and Study Center. They gave it to Krasner in exchange for a rectangular one, and “it’s now the centerpiece of the Pollock-Krasner House,” Ms. Harrison said.

The marriage ended in divorce in 1965. Later, Ms. Downs had a longtime relationship with William King, a sculptor.

The harbor would become a focus of Ms. Downs’s art and environmental activism. She was a co-founder of the Accabonac Protection Committee, which seeks to protect the water quality and preserve the undeveloped land around it. “Once something turns into real estate it’s doomed,” she said in a 2010 Star article marking the committee’s 25th anniversary.

“Cile wasn’t content to enjoy her view of Accabonac Harbor from her back porch, she wanted to preserve it for future generations,” said Lilia Melani, a longtime friend.

Ms. Downs was also a leader of the East End Women’s Alliance, a group formed at the height of the 1970s women’s movement that promoted the Equal Rights Amendment and other feminist causes. For more than 40 years, the alliance organized rallies, marches, and panel discussions with prominent feminist leaders such as Betty Friedan, the author of “The Feminine Mystique,” and Bella Abzug, a former United States congress-woman. At the group’s request, Representative Geraldine Ferraro, who in 1984 became the first female vice presidential candidate from a major party, gave a speech at the Amagansett School that summer.

“Cile had a strong sense of justice, and could become highly indignant at obvious inequities, so it’s not surprising that she came to feminism early,” Ms. Melani said.

She was a cat lover and an ardent proponent of organic gardening.

She is survived by several nieces and nephews, including Sarah Lord of Weston, Conn.

Ms. Downs was cremated. A memorial service will be held at a date to be determined in 2021.

Memorial donations have been suggested to the Accabonac Protection Committee, P.O. Box 4058, East Hampton 11937. Checks should include a phone number and an email address.