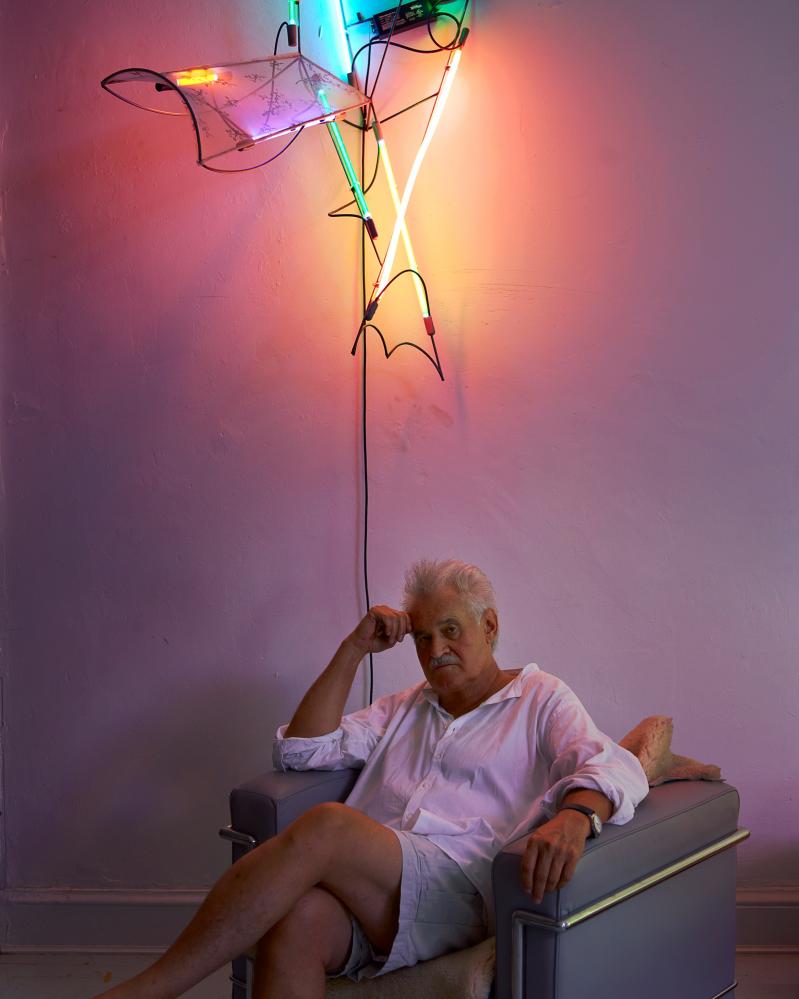 Keith Sonnier, one of a handful of artists who, starting in the 1960s, radically redefined the boundaries of sculpture, died on Saturday at Stony Brook Southampton Hospital after a long illness. He was 78.

Along with such contemporaries as Eva Hesse, Barry Le Va, Bruce Nauman, and Richard Serra, Mr. Sonnier experimented early on with unconventional materials and processes, among them neon, latex, video, satin, and bamboo. While still in his 20s, he was included in such landmark exhibitions as "9 at Castelli" at the Castelli  Warehouse, "Anti-Illusion: Procedures and Materials" at the Whitney Museum, and "Information" at the Museum of Modern Art.

"He was one of my closest friends, and I saw him all the time," Nicole Klagsbrun, an art dealer in New York City for more than 20 years, said. "He was the most generous and fun and intelligent person. He had such an incredible vision, and the way he spoke was like his work, it was full of imagery. All the light that emanated from him came into his beautiful fluorescent colors. He was an incredible human being."

Mr. Sonnier has had more than 130 solo exhibitions over the course of his career, and his work is in dozens of important public collections worldwide. "Until Today," a retrospective show, was at the Parrish Art Museum in Water Mill in 2018 and at the New Orleans Museum of Art the following year, and the Dia Foundation recently acquired four important early works for exhibition at Dia Beacon.

Alicia Longwell, the Parrish's chief curator, wrote in a tribute on the museum's website, "Keith Sonnier was an artist of ecumenical instincts, innate generosity, and abundant inquisitiveness. In works of elegant refinement and material grace, he broadened the definition for art; his presence will be deeply missed."

While he continued to work with neon and other materials throughout his career, during the 1970s Mr. Sonnier made pioneering single-channel videos and video installations that pushed at the limits of that medium, and he created "Quad Scan," a surveillance piece that used a scanner, telephone speaker, and radios. Ms. Klagsbrun curated a retrospective of his early video work in 1999.

In 1977, working with Liza Bear, he put together "Send/Receive Satellite Network," a two-phase project that provided a live satellite connection between artists in New York City and San Francisco and, in its democratizing of the means of communication, foreshadowed the development of the internet.

Keith Sonnier was born in the heart of Cajun country in Mamou, La., on July 31, 1941, to Joseph Sonnier, who owned a hardware store there, and the former Mae Ledoux.

In an interview with the sculptor Ned Smyth for Bomb magazine, Mr. Sonnier recalled having grown up "not even thinking of myself as American, because I was bilingual and I was from a French settlement in Louisiana." After earning a bachelor's degree at the University of Southwestern Louisiana in 1963, at his parents' urging he traveled to Paris.

When he returned to the United States he enrolled in the M.F.A. program at Rutgers University, where faculty during the 1960s included Robert Morris, Robert Watts, Roy Lichtenstein, and Allan Kaprow. It was Morris who had the biggest effect on the graduate student.

"Bob said, 'Make it out of whatever you want,' " Mr. Sonnier told The Star in a 2018 interview. For his graduate show Mr. Sonnier used wooden forms with inflated sections of clear plastic "that looked like part of a Wonder Woman air force, but very abstract."

"He belongs to a generation of artists that set the bar very high," said the sculptor Alice Aycock. "He never compromised, and I have always admired his work tremendously. His installations create the ineffable poetry of the transient and the ephemeral." Ms. Aycock had known Mr. Sonnier since she was a young art student at Rutgers when he was in its M.F.A. program.

For Mr. Smyth, a chance meeting with Mr. Sonnier was his entry into the New York art world. While hitchhiking in New Jersey, en route to New York from Colorado, a pickup truck pulled up and asked where he was going. "It was Keith and Dickie Landry, a friend from Louisiana who put Philip Glass's group together. They were speaking in some strange accent — Cajun patois — and talking about Leo Castelli." One thing led to another, and Mr. Smyth and Mr. Sonnier remained friends for 40 years.

While Mr. Sonnier lived and worked in New York City before moving to Bridgehampton full time in 2016, his extensive travels informed his work. In 1971 he was one of eight artists, among them Carl Andre, Mr. Serra, and Hesse, selected for Triennale-India. In an interview with Terrie Sultan, the Parrish Art Museum's director at the time of his retrospective, he said of that trip, "Leaving Western culture and looking from the East, and thinking about all the different ways in which people experience art, was very important. And having the very real physical realities of life in a culture like India hit me right in the face." He made his first bamboo pieces there, working with bamboo cage makers.

In 1984 he spent several months in Brazil, where he worked with steel for the first time. "My experiences in Brazil deeply affected me: the intense foliage, bright colors, noise, architecture," he told Ms. Sultan.

But it is neon with which he is perhaps most closely associated. In a review of "Until Today" in Art in America magazine, Charlie Tatum wrote, "Sonnier was one of the first artists to incorporate neon into his work in the 1960s. But while figures like Joseph Kosuth and Bruce Nauman used the medium around the same time to wryly challenge the conventions and limitations of language, Sonnier embraced neon as a means to stretch the definition of drawing. Early examples . . . use neon tubing as a way to sketch in three dimensions."

Mr. Sonnier first came to the East End in the late 1970s, staying with friends in Springs. To his surprise, he told Ms. Sultan, when he moved to Bridgehampton full time he became more productive than he had been in New York. "I have more time to think and experiment, to be imaginative. I think I've made some of my best work here."

According to his daughter, Olympia, who is a news producer in New York City, "Louisiana was a very big presence in his life. If you come to the house in Bridgehampton, you'll see there is a bayou feel to it, it's very loose, the grounds and the plants are beautiful."

"He found a tremendous amount of peace in being out here, by the beach, with nature. He bird-watched, he loved meeting new artists, and he tried to source his materials from out here as much as possible. He really built a sense of community. It has played a very important part in his life, both professionally and personally."

In addition to his daughter, his two former wives, Jackie Winsor, an artist, and Nessia Pope, a writer and curator, survive, as does a brother, Barry Ledoux, who lives in Miami. Another brother, Charles Sonnier, died in 2017.